If there is anything more pathetic than one Senator making political hay out of a natural disaster, it is two.

We recently recounted that amidst the reports of the death and destruction caused by the tornado in Oklahoma on Monday, Sheldon Whitehouse (D-RI) gave a speech that included references to Oklahoma twisters in a rant against Republicans challenging the theory of man-made global warming.

“This is climate change. We were warned about extreme weather. Not just hot weather. But extreme weather. When I had my hearings, when I had the gavel years ago. -It’s been a while – the scientists all agreed that what we’d start to see was extreme weather. And people looked at one another and said ‘what do you mean? It’s gonna get hot?’ Yeah, it’s gonna get hot. But you’re also going to see snow in the summer in some places. You’re gonna have terrible storms. You’re going to have tornados and all the rest. We need to protect our people. That’s our number one obligation and we have to deal with this threat that is upon us and that is gonna get worse and worse though the years.”

[Boxer] also plugged her own bill, cosponsored with Sen. Bernie Sanders that would put a tax on carbon. “Carbon could cost us the planet,” she said. “The least we could do is put a little charge on it so people move to clean energy.”

Interestingly, Whitehouse is now taking a page from the Obama Administration’s defense action template. After being strongly criticized for his appalling remarks, the senator now claims complete and total ignorance of the Oklahoma disaster.

“Tragically and unbeknownst to the senator at the time, a series of tornadoes were hitting Oklahoma at the same moment he gave his remarks,” the spokesman said. “Senator Whitehouse regrets the timing of his speech and offers his thoughts and prayers to the victims of yesterday’s storms and their families, and he stands ready to work with the senators from Oklahoma to assist them and their constituents in this time of need.”

I will simply point out the pertinent text from that speech: “When cyclones tear up Oklahoma and hurricanes swamp Alabama and wildfires scorch Texas, you come to us, the rest of the country, for billions of dollars to recover.”

On “Watts Up With That“, Antony Watts has a poll asking readers for their opinion of the matter. It looks like informed people think his apology is as real as the science behind global warming. 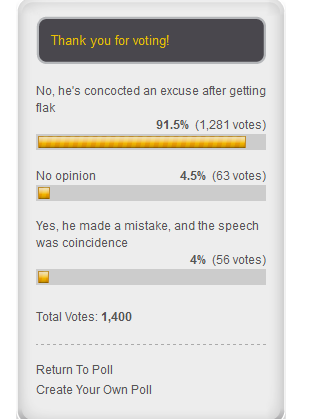 CO2 is as essential to life as is O2 – which people breathe in to live! Plants “breathe” in CO2, which humans and all oxygen-breathing life exhales, to live; it is a REQUIRED molecule for life!! Carbon is the main element that makes up most of earth’s life matter, including all living things. So HOW CAN THESE ESSENTIAL ELEMENTS AND MOLECULES BE “POLLUTANTS”?!?!?! Answer = they’re NOT! It’s all about controlling our lives!

Next they (via the EPA, this time) will be trying to make WATER a “pollutant” – oh, wait! (See also here. And here.)

Yeah, sure carbon is a POLLUTANT, Babs. Riiiight. Are you that stupid, or a willing accomplice to this farce?! But I repeat myself.

“Carbon could cost us the planet,” she said.

Boxer is emits way more carbon every time she opens her mouth than a Victorian smokestack.

Yes, Babs, and back in 1974 (a really bad tornado year), all the climate scientists told us that global cooling was to blame.

As for the so-called warming, all the climate scientists told us a decade ago that we’d see global temperatures ratcheting upwards, except that . . . oops, we haven’t (despite the best efforts of climate “scientists” to fudge the numbers and “hide the decline.”)

Why not? About half the nation buys it on its face.

We have ourselves to blame, for allowing inept, corrupt or RINO GOP leadership that can be easily led by the nose. Only the likes of elected GOP leaders like Ted Cruz can break the pattern for us. And until we refuse to tolerate a failure like Fail-Rinse-Repeat Prebus as the Chairman of the party, what is anyone complaining about?

I say let the ignoramuses link tornadoes to global warming all they want, and then congratulate them on having just proved a negative correlation between the two phenomena, in that tornado activity is actually decreasing and at a 60-year low (see http://www.usatoday.com/story/weather/2013/05/09/quiet-tornado-season/2148075/), and that global warming is therefore good.

After that sinks in their heads, then you wait till they start arguing that they actually proved a positive correlation between global warming and tornado activity, because average global temperatures have actually remained flat or even gone down in the last 15 years, and that tornado activity has therefore gone down with average global temperatures.

At that point, you just sit back and congratulate them on having just proved that global warming actually isn’t happening, and wait for their heads to explode.

Hey – it’s fun tormenting warmist fanatics – and legal, too (at least for now!)…

Just wait until Boxer links earthquakes to global warming. If you think I’m being facetious, you’ve never heard of earthquake weather or lived in CA.

If I was this stupid and uninformed at my job as Boxer is, I would not have a job.

Besides the utilization of C02 for plant growth (photosynthesis 101), CO2 in our bodies make it possible for hemaglobin to part with the O2 they they transport. We get our energy to do work because of CO2. Without CO2 we would die. Our bodies expel excess CO2; it is not a waste product. See “Bohr effect” (Niels Bohr’s father, Christian Bohr 1904) – increase of carbon dioxide in blood causes decreased affinity of hemoglobin for oxygen.” (Free Distionary). Without CO2, we die. Only in super high amounts is it dangerous. Read up on work of the late Russian Doctor Konstantin Buteyko on the importance of CO2 for the healthy functioning of the body. Why we demonize CO2 is beyond me.

“When cyclones tear up Oklahoma and hurricanes swamp Alabama and wildfires scorch Texas, you come to us, the rest of the country, for billions of dollars to recover.”

Response: And when you want to grant amnesty to illegal aliens or force an abomination of a health care plan on us, or fund failing industries, then you come to us, the taxpayers, and take billions from us to do what you damn well please, regardless of the consequences.

I read one article that claimed the sequester was responsible for the Oklahoma tornado death toll.

Why are there no positive/beneficial effects of Climate Change?

Because you can’t dream up taxpayer funded research grants to study that.

Stupid is as stupid does. And Boxer is one of the stupider politicians from California; a low bar.

1. AGW science is complex and the data field chaotic, is based largely on fragile models, and its findings vary widely.

2. 99% of people who ‘believe’ in AGW do not have a sufficient grasp of science to vet the evidence.

3. What that 99% is actually saying is that they believe the *claims* of AGW advocates.

4. Therefore, they are making an appeal not to the scientific evidence, of which they are almost entirely ignorant, but an argument to authority, a high order logical fallacy:

“Scientist A says AGW is real, Scientist A has a real job at a real university, therefore Scientist A must be correct.”

That a scientist is honest, sincere, and uniquely qualified is not a guarantee he/she cannot simply be wrong, and with AGW, too many have been corrupted by the politics and/or grant-greed.

5. AGW believers also employ the ad populum fallacy when they base their belief all or in part because x number of others believe it. Scientific fact is not a democracy upon which we vote.

6. AGW advocates routinely rely on other logical fallacies, such as ad hominem attacks on ’deniers’ who are purportedly motivated by evil intent or evil influence.

Because of the ’Fallacy Fallacy’, which holds that just because the other side employs logical fallacies, it doesn’t prove they are wrong (stopped clock, correct twice daily?) – it only proves that their false arguments fail to make their case. (The possibility remains that evidence not yet in hand might still prove their case).

I remain an AGW agnostic. I need to see the degree of reliable evidence where it would be unreasonable not to accept it. The study of AGW has been hopelessly corrupted by politics and is fraught with faked data, omitted data, political coercions, etc., to the point that it is impossible for the layman to know which evidence is genuine, nor whom to trust on it. I can’t reliably assess it because much of it is fake and I don’t have time to vet everything properly. I can say that the course of AGW advocacy over the past 20 years closely matches what you see when someone is trying to force pseudoscience into the body of proved and accepted science.

(Bing this: keywords: ‘Cold Fusion, Fleischmann, Pons’ for an example, or Therapeutic Touch, or Reiki, or… there are hundreds).

“Therapeutic Touch” I remember when that was known as a hand job.

“Carbon could cost us the planet,”

What a fucking moron.

“When cyclones tear up Oklahoma and hurricanes swamp Alabama and wildfires scorch Texas, you come to us, the rest of the country, for billions of dollars to recover.”

I’ll remember that the next time the liberal ass monkeys come looking for a handout.

“Carbon could cost us the planet,” she said. “The least we could do is put a little charge on it so people move to clean energy.”

Sounds good to me.

How about taxing politicians every time they say something stupid? That’s certainly an unnecesary expulsion of CO2 into the atmosphere.