This post is dedicated to all the Legal Insurrection readers ready to give up on California!

One of the largest and most active Tea Party groups in the nation is filing the first of what is expected to be many lawsuits against the government for allegedly singling out conservative organizations.

The NorCal Tea Party Patriots, based in northern California, claim the IRS violated its rights when it either held up or rejected its applications for tax-exempt status….

The NorCal lawsuit was filed Monday in the U.S. District Court of Cincinnati. The suit seeks group status for “all conservative and libertarian groups targeted for additional scrutiny” between March 2010 and May 2013. It’s also seeking unspecified money damages for the alleged violation of their constitutional rights and the costs associated with trying to comply with the IRS demands.

The lawsuit is being backed by Citizens for Self-Governance, a group launched by Tea Party Patriots co-founder Mark Meckler. 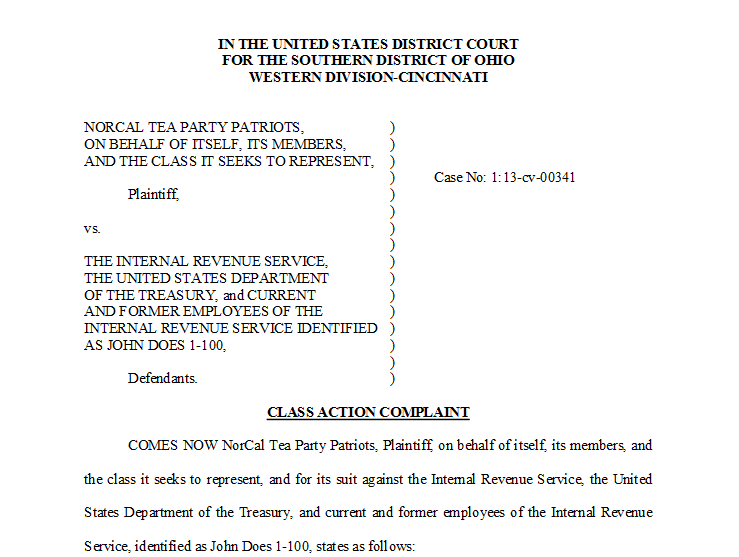 “It is important that affected citizens get involved in this fight,” said Meckler. “While it is nice that House of Representatives wants to address complaints about this IRS, it is important to remember a few things. The IRS was created by Congress. The IRS is funded by Congress. The idea Congress is going to fix the IRS is laughable. All of this abuse happened on their watch. That is why we need Americans to be engaged.”

Meckler is encouraging everyone whose group applied for non-profit status as a conservative group and was harassed or unduly burdened by requests from the IRS to join the class action lawsuit. For further information, check www.SueTheIRS.com or click HERE to complete the application form directly.

Dawn Wildman, President of San Diego’s SoCal Tax Revolt Coalition whose failures in obtaining a non-profit status with the IRS was recounted here previously, shares more background on the challenges faced by our Northern California compatriots: “NorCal got reamed, with justifications, information requests, and outright bias during their application process. The IRS made it a complete and total nightmare for them to get non-profit status.”

It was only after a local Republican congressman got involved that the NorCal Tea Party Patriots obtained their non-profit status.

So as you look at all the images in front of IRS offices from yesterday, know that the front line of this battle is moving to a courtroom soon!

cool.
but since you’re a Democrat we (per some posters) can’t read this LOL 🙂
serious though, I am not sure CA can be saved or, honestly, should be.
and it sucks for the good people there but its like gangrene now. at what point do you just excise it.
hell I don’t know, I could be way off base here.
it is good to see people fighting back at least.

One of the reasons capital “C” Conservatives have lost elections is that they have decided they are happy to see failure in our government. They walk away and are no help. They are rude to potential allies. In instances when they find themselves in agreement with people that don’t agree with them in lockstep, they choose to consign their potential allies to Hell.

Why not try something that works? Why not try welcoming people that find they agree with you, at least on something. That is how you win friends and influence people.

The disgust with the IRS is widespread enough to support some real remedies IF you have the nerve for it.

I for one am happy every time there is a failure of socialist government. Sadly the so called reasonable can’t we all get along ninnies fail to learn from that mistake and arrogantly think it will be different next time.

I am not willing to ally myself with any individual or group who may share my disgust with an institution or policy whose solution runs counter to liberty and free enterprise.

Before you criticize one group for not being reasonable perhaps you should look at the motives of your proposed allies.

The IRS, as constituted, is a criminal organization with rot going all the way to the top. Leftists, who by their very nature seek the power of government jobs, seem to always have an agenda that translates into their daily work. This inbred tendency, encouraged by a President who urged supporters to react to political opponents by “getting in their face” has led to gross and criminal misconduct by all levels in the IRS.
What will it take to disband the IRS as an agency along with the people who work there and re-organize with a new name, a new mission, and new people who have an acute understanding of the consequences of having a partisan political objective?

Rot is already up to their top.

Look at that fantastic quote from NORCAL.

I had a dream last night. I dreamed that angels gave us a simple tax code applying to businesses and individuals that did not take a professional to interpret. Everybody paid and it did not single out the successful with punitive rates because some greedy politician could incite the poor and middle class with impossible unproductive rants about fairness. In my dream this was quickly adopted by both parties in Congress.
It was tax code that could not be manipulated by greedy congress people or generous lobbyist. I saw a taxing system that was simple and fair, it could be figured out on a postcard, and it stayed the same year by year except for downward adjustments.
In my dream I saw a small agency in charge of our tax system. One that acted independent of partisan political pressures from all areas. One whose main job was simply collecting taxes and keeping records of receipts.
Alas, it was only a dream.

Why don’t the go all the way up the chain of command and join the Secretary of Treasury & the President in the law suit. And also the political team — Axelrod, Jarrett, and whoever else fits that description; President’s counsel; Jay Carney. Then depose them and send them interrogatories. Looking for Judge Sirica. And see what they knew and when they knew it.

Time to end the IRS.

Then to implement a simple flat tax with local city and state tax agencies collecting it.

Then those agencies can send to DC only what the local and state governments don’t use. LOL

Heh… This could call for the mother of all IRS audits!

Add to this “special” investigations by the “Justice” department seizing all kind of stuff!!

Yet another headache for the anointed one and his somewhat loyal staff!!!

Don’t give up on California. In a special election yesterday we elected a Republican to a state Senate seat to replace a seat vacated by a Democrat. This Senate district has a significant Democrat voter advantage.

The Dems still have a super majority, but this was a nice breath of fresh air.