Which church would that be?

Which church would that be?

Sending you a photo of bumper stickers. I saw this car parked next to a Unitarian church in Boston. : ) 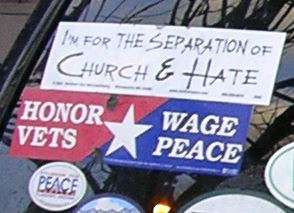 Liberals always project their own inner hatred onto others.

They feel hated and are hyper-offended when anyone even slightly disapproves of their lifestyle or disagrees with their agenda or expresses differing beliefs.

Liberals go by their emotions, beliefs, thoughts (not evidence, science, math, statistics, reality, logic, common sense) to determine what is or should be ‘Politically Correct.’

However, PC is not consistent, logical or subject to debate, discussion. We have learned that PC really stands for ‘Punitive Conformity’ and as we have seen, people can be prosecuted, persecuted, fired and imprisoned for dissent from the manufactured myths of PC Propaganda. Some liberal professors actually want to kill people who disagree with the Global Warming Myth.

I’ve known Unitarians who have told me they view themselves as more spiritual than religious. But how on earth do you reconcile “prayerfully pro-choice”? It implies some deity at a minimum. It’s one thing to say “live and let live”. It’s another to suggest you pray in any way in support of abortion. Totally incongruous if true.

Outward stupidity – and probably illegal as too much of the rear window is blocked for visibility.

The honor vets/wage peace sticker is part of the left’s campaign to make the US military even more asymmetric. That is why they are politically and culturally all over the PTSD tsunami.

Rather than oppose the military they have smartly decided to honor vets. The military is after all just another government program. It will be a great job program for gays, a Keynesian goldmine, a crony capitalism cornucopia, and in the end they will spend the US military into oblivion.

Depressing to see the Appalachian Mountain Club sticker in the upper left hand corner. It adds anecdotal evidence to my gut feeling that this once-sane, non-partisan conservation group is morphing into just another leftist front group.

The Unitarian church is for atheists that want something to do on Sunday mornings.

The Church of the Terminally Idiotic.

“Wage pace” and “pro-choice”, really? The principal cause of childhood mortality is elective abortion. More people, and certainly more innocent people, die every year from elective abortion than in war. The right choice should be obvious; but, apparently, it is not.

This driver must be a follower of the eternally confused.

Can principles which are internally, externally, and mutually inconsistent be considered to constitute a legitimate philosophy, or do they merely compose a premise for a dysfunctional convergence (i.e. clusterfuck)?

It is people like this who we can thank for the civilization paradox. That is a progressive corruption and dysfunction sponsored by dissociation of risk.

The driver is sacrificing her rear vision to be seen. Narcissist.

They never learn from history anyway.

Send them this one to add…
http://imageshack.us/a/img4/9259/dontformanopinion.jpg

I guess you saw this one. The ride that the Getaway Bomber ‘jacked had a… you guessed it… a COEXIST bumper sticker on it!

When this lefty driver mortally injures you by running you over in reverse because she can’t see through her rear window because of all the “consciousness raising” she’s doing … you’ll at least feel solace in the fact you died for a noble cause.

Reminds one of this gem from the Boston Globe’s Charles Pierce in 2003:

“If she had lived, Mary Jo Kopechne would be 62 years old. Through his tireless work as a legislator, Edward Kennedy would have brought comfort to her in her old age.”

Key words: “If she had lived.”

Ummm, Chuck, she didn’t live. She died an agonizing death.

I fear liberals with cars.

A very agonizing death. She had an air pocket and likely lived for 2+ hours underwater, per expert testimony. Her fingernails were raw as she tried in vain to escape.

Meanwhile, the Swimmer was on a payphone in the hotel hallway most of the night, trying to get friends and relatives to take the blame. Also, he made arrangements to get a drivers license ON A SUNDAY because his license expired 6-months ago.

These are FACTS – but you won’t get them from the Boston Globe-Democrat.

I’m for the separation of church and hate. The overstepping state is naturally an entity of coercion and hate. That’s why it should be minimized and reduced from our lives and religion:)

“Buy Fresh, Buy Local” — in Boston? What would you eat in winter? A lot of eggs, maybe.