When Atheists Attack (each other)

When Atheists Attack (each other)

There is a fairly lively Twitter/blogosphere argument going on right now over “the New Atheist” movement.

The argument is raging between Sam Harris (New Atheist) and Glenn Greenwald (old (?) Atheist), with Robert Spencer weighing in on how the accusation of “Islamaphobia” is used to stifle debate.

An email exchange I had today with Sam Harris regarding two highly critical columns written about him this weekggsidedocs.blogspot.com.br/2013/04/email-…

Leave it to our favorite progressive blogger to weigh in with the moral equivalency argument (I must be blocked or something because can’t embed her tweets, so here’s an image): 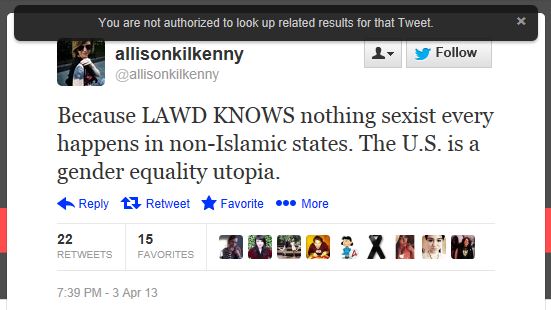 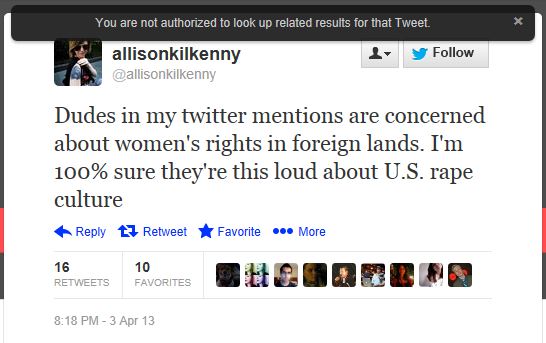 I think it’s fair to say no minds were changed. I’m just glad the debate is going on, as it needs to.

I’ll have more on that when I post again about the “Pinkwashing” movement.

What she screeching about “the US rape culture”, or the “US RAP culture”…???

If there is no God then there is no theistic objective morality for the universe. If this is the case then it really doesn’t matter which atheist is right or wrong. And how would they know when they have won such a debate when a random moral bias infuses their thinking?

Most of these guys aren’t even proper atheists, but rather some form of misotheist.

Does the “US rape culture” refer to rape or rape-rape?

Does it refer to the abusive treatment of Palin, Bachmann, et al?

Perhaps it refers to “friends with benefits”?

Oh, I get it. The “abusive rape culture” refers to redistributive change (i.e. involuntary exploitation), or the Left’s promises to follow a rainbow to dysfunctional convergence, including “affordable” health care.

No, it likely refers to contraceptives and abortion/choice, which ensure a woman remains available for sex… taxation, and exploited for democratic leverage.

Yeah, that’s what allisonKilkenny is complaining about. She’s concerned that left-wing ideologically-motivated policies are denigrating individual dignity and causing a general devaluation of human life.

I think it’s overwhelmingly stupid to take insulting swipes at people with whom you agree. The whole point of politics is to work with other reasonable people, in order to accomplish something worthwhile. You can’t do that if you alienate potential allies that you need.

If only that’s how it happened

As for Allison, she’s a provincial. Somebody should ask that fool whether she’s ever read the Hamas Covenant.

One of my LI mantras:

I’ve said it before and will repeat it until it changes or Bill kicks me out: conservatives refuse to recognize that they stink at coalition politics.

re: “US rape culture”

There are other possibilities, including… Remember Benghazi!

Anyway, “rape” is an act of involuntary exploitation, which decent people assume violates individual dignity. It includes but is not limited to acts of sexual incursions.

allisonKilkenny needs to review the inadequacy of her atheistic faith to guide moral development and especially the civil and human rights violations committed by her left-wing ideology.

I’ve been wondering about something: Where do Atheists get their values and morals if not from some religion?

“I’ve been wondering about something: Where do Atheists get their values and morals if not from some religion?”

Do you think it’s a coincidence that every major religion, without exception, has some variation of “the Golden Rule”? Some version of “do unto others as you would have them do unto you.”

Now, stretch you brain a little, Ron. Maybe, instead of the religion, THAT is where morals come from. The ability to not treat people badly. Think that could be it?

I think that the ‘rape culture’ argument can be easily analyzed by using available data:

1) for the following countries, how many rapes have been reported per capita in: USA, Israel, France, Egypt?

2) Since Islam took over in Egypt, have the number of female tourists from USA risen or fallen? One would think that if the USA had a culture supporting rape more than islamic Egypt, American women would want to go on vacation in Egypt to get to someplace where they’re free from worrying about being raped. Or vice-versa.

3) repeat above for Egypt vs. Israel – are American women more likely to go to Egypt (and not Israel) since islam took over, or not?

As far as values and morals for atheists: I can’t answer that, as I’ve not been able to get a consistent answer from the Atheists I know; they generally seem to be more hostile to Western religion than anything else. Which is why they don’t have a problem with Islam calling out for murdering Atheists and raping women.

In fact, that’s pretty much how I determine if they’re actually atheists, or just haters.

US Rape culture? Does he mean Bill Clinton and the Kennedys?

Atheists come in different breeds from Marxist agitators all the way to jaded Christian and Jewish conservatives who lost faith for whatever reason.

I’ve had many a twitter battle with atheist twitter gang leaders and their followers and the best of memes against them are based on calling our their Marxist goals of undermining organized Christian religion.

Also of power is calling out their preference for Christianity bashing while ignoring Islam as proof of Marxist activists/agitators in atheist circles.

Another tool to combat them is demanding proof of their assertion “That God Does Not Exist” and hammering them relentlessly with it.

Not one person on the face of the earth can prove the assertion that there is no God. No one and no one will ever will be able to.

I am not a Bible reader… I do not attend organized religious services. I am a Christian, nonetheless.

Their carefully crafted anti-Christianity atheist weapons based on countering passages from the Bible don’t work on me at all.

Thanks Professor for the (unintended?) humor.

“Who’s behind that do you think?”

They may not believe in God,
but they sure make me believe there are “satans.”

Ah, nothing quite like a mention of the mythical non-existent pink unicorn rape culture.

Unreal. Actual rape and subsequent honor killing – no problem. Perceived “culture” of rape in the US – worst problem EVAH!!!!1!eleventy