What don’t you understand about these budget plans?

What don’t you understand about these budget plans?

The choice is so clear.

Which means they won’t make the right choice. 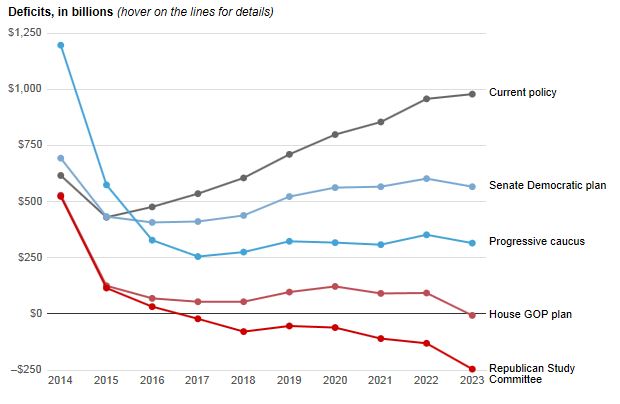 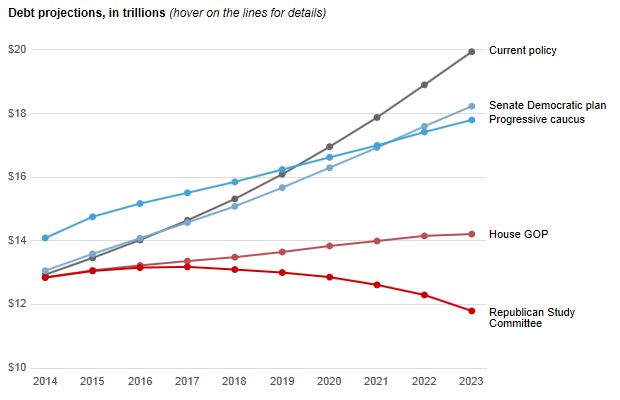 Even the best plan doesn’t even have us breaking even until 2023. That’s zero paydown of the debt for the next 10 years. Basically, they are all political fiction — anything can happen in ten years.

Same, you deserve another chance.

As to the “fiction” part; yeah, so? You don’t think a plan is worth having?

To be fair, the Republican budgets have unrealistic growth assumptions and wouldn’t actually balance the budget.

But they are still better than the Dems.

In fact I think that the GOP’s Study Committee outlook should be even more in the way of deficit and debt projections.

When it is safe to assume that the federal budget suffers a 30% or greater loss each year from fraud, waste and abuse, there’s a lot of room to hatchet away frivolous spending.

The Democrat faithful still chant that there is no debt problem … that there is plenty of money out there. I assume they think all private assets can be converted to cash and confiscated by the government, like Cyprus did to their rich.

But most assets are performing in some capacity. Capitalism is a bunch of small sized capitalists that at least own stocks, if not farms or their own business. They can’t collectively sell their businesses or stocks, and donate them to big government.

Obamacare and 100 other government shackles already make it hard for these assets to perform profitably. Yet these commie loyalists still think there is always another golden egg to squeeze from the capitalist, as they tighten their stranglehold on the squawking goose.

Those charts are way too rosy. When Carter had these pitiful labor participation rates, we had more real manufacturing, instead of a GDP built on financial chicanery. We had much less debt, so higher interest rates wouldn’t deal a crushing blow. And we got a Reagan that loved this country, instead of an Obama intent on punishing the successful, and weakening us internationally.

We can’t keep increasing the welfare state and raising taxes, while health care rates keep skyrocketing, and the EPA and Obama’s unions run rough shod on industry. That is pure fantasy. The boomers are retiring, and the union pension bombs are blowing up state budgets. The charts will all curl upward, without radical reform.

These tables projecting in 2022 are partly reliant on the US $ remaining the reserve currency.

Bit by bit it is being overlooked & circumnavigated. Not from enemies but allies . Australia & China signed a deal to deal directly in yuan – small bikkies so far at $120 billion but China is negotiating with others .