I spotted these two bumper stickers on the back of a Dodge Ram in Jacksonville, Florida.

I hate to tell the guy but his vehicle was probably made in Mexico because Democrat social engineering destroyed Detroit.

Yup, pretty good chance that Unicorn was assembled at the Saltillo Truck Assembly plant in Mexico. 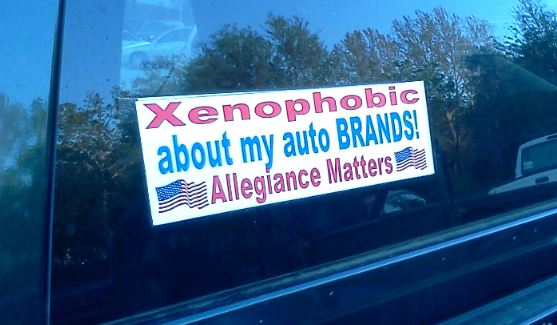 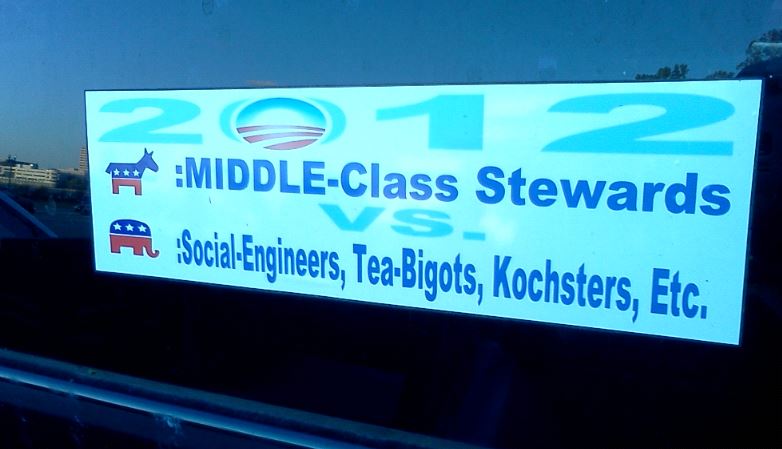 The middle class has taken an unprecedented beating under the Obamic Decline! It WILL get worse.

Teh stupid is strong with this one…

Could have been built in Canada, Japan, or China. I once had a Mazda that was built in Trenton, NJ. Brand doesn’t tell you where it was made.

Professor, I pulled up my notes on Light Duty production numbers (by plant). The February numbers (March numbers should be available later this week) for YTD showed 41,742 Dodge Ram’s made in Warren, MI and 5,859 made in Saltillo, Mex. The rest of the report shows some 19,000 total trucks made for Chrysler/Dodge/Jeep/Fiat in Saltillo, with about 5,000 for Freightliner. I’ve sent you the report in a separate email.

Middle-class stewards???? In what universe? And this person not only believes it, he believes it so strongly that he bought a bumper sticker.

I would really like to know what world these people live in. How do they believe these things?

I wonder where those bumper stickers were made?

The “Middle-Class Stewards” are working their strange red-ink magic in Illinois. That is, the stewards who are not in prison yet.

If only you could ask the sticker owner how well the stewards are ‘helping’ the middle class lately…..I suspect you would get the usual sputtering about Bush and how at least it isn’t as bad as it could have been…or some such nonsense.

And the sticker continues the progressive method of projection: calling the GOP social engineers is the granddaddy of all transference.

“MADE in America” is pretty tricky these days. They may say “assembled” in America, but 90% could still be MADE in China or Mexico.

That was one complaint I read about the Ram, but I didn’t find any specific numbers. They probably would try to hide those facts if they could.

Democrats (in “union” with their Hollywood and media branches) have a death grip on public opinion. Once the HATE for conservatives is established, ignorant people like this one will cling to their lefty religion, and deny their own bigotry.

When workers of the world unite, will Mexico be paying union wages? What about China?

Yep, that pretty much covers what the liberal “regressives” are stewards of.

Liberals Have A Plan:

Tax Jack The Rich Right Out Of The Country For Good.

Require Background Checks When Buying Bullets And Charge A Fat Federal Fee For That.

Husband and I are in the middle of middle class living on a fixed income. We have taken quite a beating on our small investments thanks to both parties “stewardship”. I’m Fed up with both.

The bumper sticker is not exactly accurate, too, when lumping TEA Party, like me, with the Repub’s. We’re NOT Republicans because they like to ban whatever it is they don’t like that year, raise taxes and pass pointless legislation. We’re Libertarians. It’s a totally different party. Libertarians believe in Liberty and a return to the US Constitution. If the bumper sticker guy is trying to be clever or hateful, at least he could get his facts straight.

My retort to the perjorative ‘Kochsters’:

If the Democrats were ever stewards of the middle class, they are today stewards of the upper class which exploit the lower class to create democratic leverage, which along with exploiting other differentials and gradients is used to advance their political, economic, and social standing.

That is what the Left does. They establish monopolies and monopolistic behaviors enforced through a central authority in order to consolidate capital and control in minority hands.

When did involuntary exploitation (e.g. redistributive change) return to fashion? Perhaps they are thinking of Obamacare, which does not address progressive inflation, and will serve to exacerbate the systemic corruption in government.

As for bigots, if society chooses to dispense with biological imperatives, and ceases to promote evolutionary fitness, then there is no defensible reason to continue discrimination between any union. All unions must be corporate and there cannot be arbitrary discrimination between sexual and platonic relationships, kinds and forms of unions, numbers and combinations of members. Anyone who continues to discriminate between any and all unions is demonstrating a unique prejudice.

Also, anyone who supports equal protection, rights, and benefits, cannot be pro-abortion or pro-choice. There is no cause to justify arbitrary discrimination between developing human life based on its stage of development. Elective abortions violate our unalienable Right to Life, and cannot be justified at any time without cause and following due process.

The Democrats, on principle, exchange their liberty, and sacrifice human lives, for submission with benefits.

Looks like somebody got their colostomy bag hooked to the wrong orifice.

Social engineers? This from the party of lawyers and social workers.

Hey, anyone this delusional will be on SSI this time next year week.