Social media as a whole is still very much in its infancy, and trying to predict real outcomes from 140 character tweets and Facebook posts is, to date, hardly an exact science.

However, this hasn’t stopped potential pioneers in the new medium from trying to make use of the largely untapped political resource that is social media. Case in point: Laughton Chandler, who recently conducted an analysis of social media to attempt a prediction at tomorrow’s special election in South Carolina.

Skepticism of such analysis is not an uncommon reaction. Chandler gave some limited insight into his methods in an article on Patch.com, a site that has been following the special election closely.

“I used several metrics, beyond mere likes/followers/subscribers, but also going into how many other people are independently engaged/discussing the particular candidate,” Chandler wrote Patch. However, he would not disclose all of his metrics.

As with any form of statistical analysis, the metrics are the key. The problem with using social media is that consistently reliable metrics have heretofore eluded the emerging industry.

The obvious caveat with predictions of the type Chandler is engaging in is that, on the whole, the medium is fraught with inconsistencies. Whether it’s “Twitter bots” masquerading as real people or simply the existence of overzealous followers flooding the internet with mentions leading to the appearance of a strong following. Did an image of Ron Paul just pop into your mind?

In spite of the relative unreliability of social media based predictions to date, Chandler may be on to something. 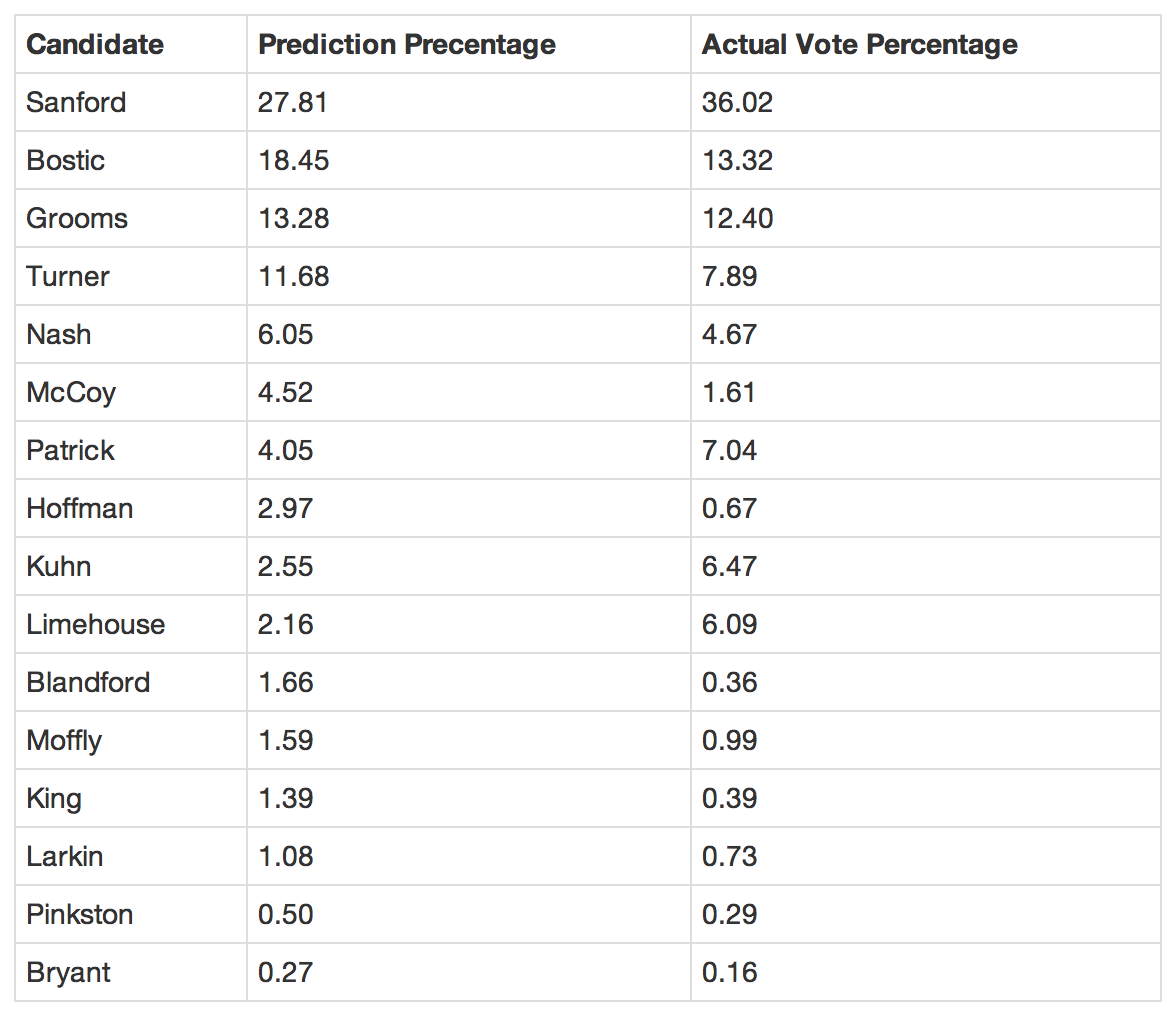 There certainly is a fair amount of discrepancy between the predicted and actual results, but accurately predicting the top 4 finishers in an obscure 16-person primary is a fairly impressive feat using any form of statistical analysis.

Couple these figures with the fact that Bostic recently received an endorsement from former long-time Congressman in South Carolina’s 1st district, Henry Brown, and this race might just catch us all by surprise.

Recall our stand on this race regarding Mark Sanford: Just say no. Not only can the GOP do better, the GOP needs better.

Predicting the order of a top few of a large field, without getting values precisely, doesn’t instill a lot of confidence the method will work in a field of two.

But I’ll go with the endorsements as a means of ‘guessing’. Not only has Henry Brown surfaced, but so did Rick Santorum. He might have little influence on national elections, but on a statewide election in SC I suspect it will cause more than a few to pay attention. Especially for those who have concerns about character, ethics, etc. (Sanford)

I am not certain that “Right now, the GOP needs Curtis Bostic in South Carolina.”

But given the choice between Bostic and Sanford, I believe it’s in the best interest of South Carolina Voters to NOT choose a philanderer to represent them. How can one expect Sanford to keep promises to voters if he cannot even keep a marital vow to his wife?

Forgiveness is all well and good, but I believe Mark Sanford can live a quiet life outside of politics and in private. I’m sure He, Todd Akin, and Richard Mourdock can write a book about how unfair politics are, when it involves the politics of personal SELF-destruction.

No Mark Sanford. No Jeb Bush. No Chris Christie. No Mark Kirk. No. No. No.

The people of SC who favor Bostic should take heart: David Dewhurst had a plurality in a big field but Cruz took him to the run-off and TURNOUT beat Dewhurst. Bostic can do it with TURNOUT.

I live in SC-1 and am seriously plugged into the political process down here. From my standpoint, the issue on Tuesday boils down to only one thing: which candidate can beat Colbert-Busch. She’s clean; she’s well-funded; her ads focus on jobs, jobs, jobs; and she’s got that Colbert celebrity thing going for her. For a lot of people, that’s enough. Who cares about policies or positions?

Although the district is predominantly Republican, there is a very real danger that the GOP could lose this seat.

So you take your pick: a seriously flawed “mainstream Republican” with a proven ability to raise funds and a clear, but tarnished what-you-see-is-what-you-get persona vs. a personal injury attorney without much name recognition, who professes to be a tea partier, and who has little political experience except on the county council level. And note to self, his leadership, his voting record, and his attendance record there were by no means exemplary.

I’ve had one-on-one time with both candidates (democracy in action!), and I think Sanford is more pragmatic, better grounded, and more electable vs. Colbert-Busch.

As far as Sanford’s personal peccadilloes (not to be confused with picadillos) go, he was and always will be a cad, and he surely screwed the pooch (as it were). Clinton did much worse, and he sure got away with it.

I’m a firm believer that it always takes two to screw up a marriage, and what I know about Jenny doesn’t seem to indicate that she was completely blameless. Not a lot sweetness there.

Once again, the Republicans face a damn Hobson’s choice, even way down here on the Congressional District level. I’m sick of this.

More at The Corner.