Maybe we can sell the Superman Building to Detroit

As we have pointed out until we were Blue in the face, the toxic combination of union and Democratic control of almost every aspect of Rhode Island has created an economic death spiral in which Rhode Island has the highest unemployment in the nation and is losing population.

Yet we sure does love us them Democratic politicians, and the unions which control them. 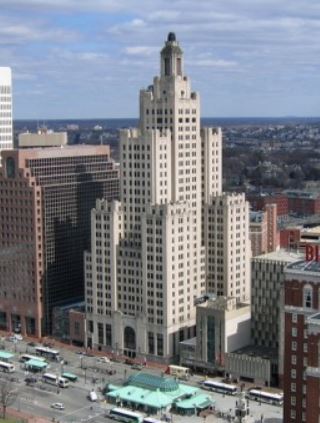 Rhode Island’s tallest building will soon be its most visible symbol of the state’s long economic decline.

The 26-story Art Deco-style skyscraper, known to some as the “Superman building” for its similarity to the Daily Planet headquarters in the old TV show, is losing its sole tenant this month. No one is moving in, and the building, the most distinctive feature on the Providence skyline, will no longer be fully illuminated at night, if at all, its owner says.

It’s a blow for the city and the state, which had 9.4 percent unemployment in February and has had one of the worst jobless rates in the nation for years.

Nicolas Retsinas, a senior lecturer in real estate at Harvard Business School, says 111 Westminster, as the building is also known, will be “the ultimate urban pothole.”

At 428 feet, or about one-third the height of the Empire State Building, it was the tallest skyscraper in New England when it opened in 1928 as the Industrial National Bank Building.

Such a shame. People from that part of the country used to be self-reliant, skilled, tough, productive people.

I read a story today about a 53 story building set to be built in Midland, Texas…which is the definition of “the middle of nowhere”, except it is the vibrant heart of the Permian Basin, one of the older oil fields in Texas.

Compare Austin to Providence back in 1990 when I arrived and this was a back horse town without any real high buildings.

Today Austin has multiple buildings that are far taller while Providence languishes with same backward thinking that has been RI’s style for decades.

What could have been just ain’t gonna be.

For example, the Austonian is the tallest residential tower west of the Mississippi and even taller buildings are on the way.

Can someone say, “Business Friendly?”

This John Ondrasik song is too good for Rhode Island.

This comes as no surprise to me.

One thing, I believe that the building opened as the Union Trust and later as Industrial Trust, Industrial National, Fleet National and lastly the BOA tower.

Yep, all the old big line local banks are gone…

Meanwhile, the skyline in Salt Lake City is rising. I would advise a visit before a democratic consensus is formed.

“Sole tenant”? I wouldn’t want to be the only tenant in a building that size. I wonder who it was?

I should read about the history of Art Deco NE America . I noted previously that The Great Gatsby was filmed in Sydney so does that mean they are all gone ?

For a moment I had a flashback as the earlier Great Gatsby was filmed in Newport, RI way back when the prof was a toddler…

Yeah, love the art/deco. My old law school, not a great school but a pretty great building. http://www.lasavvytours.com/last%20blog%20bullock's%20wilshire.jpg

Very nice . It was a good thing Southwestern did in taking it over .LA has some nice examples .

Maybe we can sell the Superman Building to Detroit

I don’t think Detroit would be able to afford it, either. After all, the old Michigan Central Station is an equally grandiose building that the city has, by and large, left to rot.

The Superman Buildong isn’t dead yet there are deals in the makings…
It’s a fair bet when High Rock Development purchased the Superman Bldg (2008, year of the housing meltdown) they expected when vacant cost to rehab would be out of reach by private funding and gambled on state tax credits to float the rehab project. Come 2012 38 Studios by the Governor’s reckoning circled the bowl overnight leaving a $75 Million Moral Obligation Bond and no accountable.
$75 Million before interest is an interesting number, an agreement to pay off the 38 Studio Bond kills any prospect of State Funding to High Rock and in no one’s political interest. As a moral obligation bond, it’s an opportunist chance to change Manure to Gold, and they’re lining up to cash in. Default on the bond will be painted as the state
now has $75 Million to kick in … perception is everything

Anyone thinks House Speaker Gordon Fox and company aren’t up to their backsides in the Superman Bldg came down with the last drop of rain. Fox best stick to his day job, as an actor he sucks…. Defaulting on the $75 Million moral obligation bond is the Bait and Switch and Ace up the Sleeve to fund High Rock’s $100 Million albatross we know as the Superman building… Manure to Gold … Right… I reckon we’re all about to become stockholders in a 26 story $100 Million Money Pit…

Yep, the likes of the politicos/unions/thugs in RI are pretty adept at alchemy where hot steaming doo-ddo is converted into the finest chocolate to be found anywhere…