As we mourn the dead and wounded, focus inevitably turns to the political war fought in the blogosphere and on Twitter before the facts were known.

There were plenty of hateful tweets on all sides and in all directions. There also were attempts by people like Nick Kristoff of the NY Times, Charles Pierce of Esquire, and Chris Matthews of MSNBC, to name a few, to take political advantage.

But one tweet stood out for its sheer pathology.

Richard Silverstein is a well-known left-wing hyper-critic of Israel and apologist for anti-Israel extremism, who runs the Tikun Olam website.

Silverstein tweeted that although he didn’t know who was behind the attacks in Boston, if they were Islamists, the United States would be to blame: 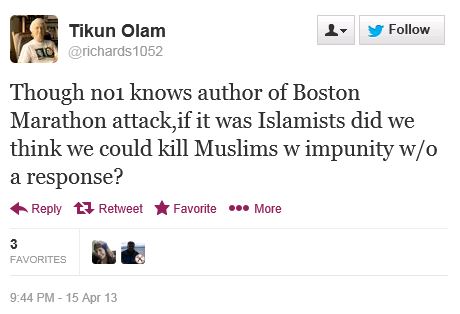 In case there were any doubt, when called out on it Silverstein doubled down, invoking drone killings: 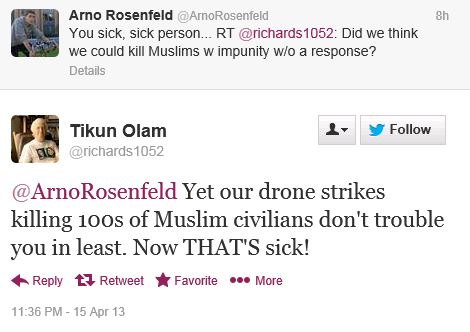 The tweet is pathological in so many respects and on so many levels, precisely because we don’t know who did it or what motivated them.

Yet excuses already are being made and justifications being lined up for Islamists, if they were indeed behind it.

Yet excuses already are being made and justifications being lined up for Islamists, if they were indeed behind it.

As a side note: I am amazed ‘racism’, hasn’t become the IN thing term, for Dr. Kermit Mengele

Alex Jones is also looking for a way to blame this on the government or government agencies. I read yesterday he was calling this a ‘false flag’ operation.

At least the kooks on the left and the right are consistent and open about their self-loathing views.

What I find fascinating is that no one on the Left ever says to Muslims: “you can’t kill other people with impunity.” Hence the war in Iraq.

It’s almost as though the Left thinks Muslims are retards who cannot understand that simple concept.

Obama declared it a “tragedy”.

While that can have more generic meaning, the origin conveys the inner soul of the left.

“tragedy [ˈtrædʒɪdɪ]
n pl -dies
1. (Performing Arts / Theatre) (esp in classical and Renaissance drama) a play in which the protagonist, usually a man of importance and outstanding personal qualities, falls to disaster through the combination of a personal failing and circumstances with which he cannot deal.”

In Obama’s view, the US is the big and powerful protagonist, but “God D*mn America”, for its fatal flaw of being too … ? what? Too clingy to their religion and guns? Too protective of individual freedom? Too resistant to Marxist overtures?

Blame America first. Same in Benghazi. The immediate response was not to rally all forces to protect the ambassador (the battle was ongoing as choices were made). No, that was too provocative. Instead Rice and Obama made the rounds preaching that America’s Achilles heel was their own freedom, of speech in this case. That darn video … “America just doesn’t know when to shut up”.

Obama promised to catch the Benghazi bad guys, but has done nothing but cover up his own malfeasance and lies. Boston will be harder to ignore, and sweep under the rug, but they are already working on their spin.

Obama would like U.S. to quit provoking tyrants by putting freedom on such open display with things like “Patriot’s day”. Are we exceptional? Well sort of, as long as we understand that Muslim countries see their terrorists as “Patriots” as well.

As Obama gives more jets to the Muslim Brotherhood and opens our borders, he sounds more like Stalin than those old white guys on our currency.

So, Silverstein is hell-bent on proving that Muslims are unethical. Some people would call that prejudice.

Terrorist acts and the killing of innocents are forbidden under Islam, where they are classified as “hirabah” or “unholy war.”

According to Islam, no “infidel” is innocent; all are deemed guilty of rebelling against Allah. Muslims are theologically commanded to fight them until they submit to the jackboot of Islam.

Muhammad is recorded as saying “I have been made victorious by terror.” Indeed, terrorizing others has historically been the chief means of Islamic expansion. When terrorist acts are committed today, Muslims openly celebrate. There is no chorus of imams telling them it’s wrong.

The claim that Islam forbids “terrorist acts” against infidels (or the “wrong” sort of Muslims) is either ignorant or dishonest. Taqiyya, anyone?

Well, answering my own question, the haters on the Collective do, that’s who.

Is he saying Obama is to blame for Boston given that he has greatly expanded the use of drones?

Imagine what Christians would be like if the Westboro Baptist Church was in charge of most of their education? For generations after WWII, radical Islamist sects have played a greater and greater role in education. The results are predictable.

While waiting for an eye exam this a.m. I had to listen to the always blathering Bawney Fwank on CNN say that the ‘splosions are “..pwoof positive..” of,”..the absowoote need of Big Govunment..”

“There were moments of chaos right there, but they were able to clear the scene fairly well. What are your impressions of the response in Boston so far?”

The question was posed to Bwany Fwank-lover. His response is MY candidate for most pathological…

“I’m glad you raised that, because it gives me a chance to make a point I’ve felt strongly about,” said Frank. “In this terrible situation, let’s be very grateful that we had a well-funded, functioning government. It is very fashionable in America, and has been for some time to criticize government, belittle public employees, talk about their pensions, talk about what people think … of [their] health care. Here we saw government in two ways perform very well. … I never was as a member of Congress one of the cheerleaders for less government, lower taxes. No tax cut would have helped us deal with this or will help us recover. This is very expensive.”

Lizzy Warren also elbowed her way into the “FBI press conference” this morning, giving a shout out to her homey Barack.

“We didn’t have to call the president, he called us. He is involved and proactive” (or some such gushy agitprop)

Princess Running Bare was just impressed that Barrackah didn’t go to bed before “reaching out”.

It’s odd* that he’s already leaping in to defend Muslims IF they did indeed commit the act, but would he so readily “understand” the motives if it’s a TEA Partier who set off the explosions? Is he ready to say “Well, you know, they do have a point and we should dialogue with them?” Of course not.

It’s either ethical to blow up civilians who are just enjoying a marathon or it isn’t. Personally, I say it isn’t. (Call me a nutty absolutist!) But according to these leftist lunatics, it CAN be ethical and “understandable” if it’s Muslims doing it. Same way it’s OK when black people shoot cops, I guess. Same way it’s OK to call a white, Republican president a “chimp.” Same way it’s OK to attack Sarah Palin with sexist slurs.

The left has a very complex set of rules and privileges broken down into special dos and don’ts for every race, ethnicity, age group, religion, sect, gender, gender-identification, sexual preference… Man! I can’t keep it all straight! (But it’s very easy for me. I’m an old, white, Christian, heterosexual male of English extraction. I’m basically not allowed to do anything, everyone’s allowed to help themselves to my money, and everything I say is bigoted and wrong.)

*It’s not odd, of course; it’s totally predictable. I don’t know why I used that word.