Looking Back on Our Future

Looking Back on Our Future

So, we were very interested to learn about plans to rope-an-asteroid for closer study:

The plan would speed up by four years the existing mission to land astronauts on an asteroid by bringing the space rock closer to Earth, Sen. Bill Nelson said.

The robotic ship would capture the 500-ton, 25-foot (450 metric-ton, 7.6-meter) asteroid in 2019. Then using an Orion space capsule, now being developed, a crew of about four astronauts would nuzzle up next to the rock in 2021 for spacewalking exploration, according to a government document obtained by The Associated Press.

There was a dramatic asteroid strike in Russia recently. So, as Professor Glenn Reynolds notes, now is not too soon to figure out how do deal with “killer asteroids”.

Interestingly, Reynolds also featured “killer asteroid profits” on an Instavision Video. Reynolds talked to Chris Lewicki, President of Planetary Resources, an asteroid mining company. So this project could well be an innovative next step in extra-terrestrial resource development.

Lewicki remarked that asteroid-roping could really inspire public interest in space exploration and its technologies. One of my friends is Sean Richards, who is a tech-savvy craftsman. On a Facebook entry I caught, he offered a less positive take on the news.

When I read these books in the late ’60s early ’70s, we were still landing on the moon. Talk was about about landing on Mars by the early ’80s. Perhaps a Mars expedition launched from a Moon base!

There was supposed to be a Mars Colony by the late ’80s, then manned missions to the outer planets. Kids I went to high school with talked with genuine excitement about not needing to be a military pilot to get into space, and about living and working in space.

…Every President since Nixon (with the exception of perhaps Reagan) has used the excuse of budget needs and political agendas to slow our manned space exploration programs, to shift focus, to cut one program for getting into space in favor of a supposedly better one, each time delaying, and downsizing, and putting off manned exploration for yet another decade.. or two.

As a species we need to get off this very vulnerable space rock. This nation needs to start leading the way again.

We languish. We no longer dream. Kids no longer see the possibility of living on the Moon or Mars or of expeditions to the outer moons and planets.

Richards makes a good point, especially as NASA policy seems more directed at political correctness than space exploration. This image of Los Angeles in 2013, painted 25 years ago, offers a perspective on this subject: 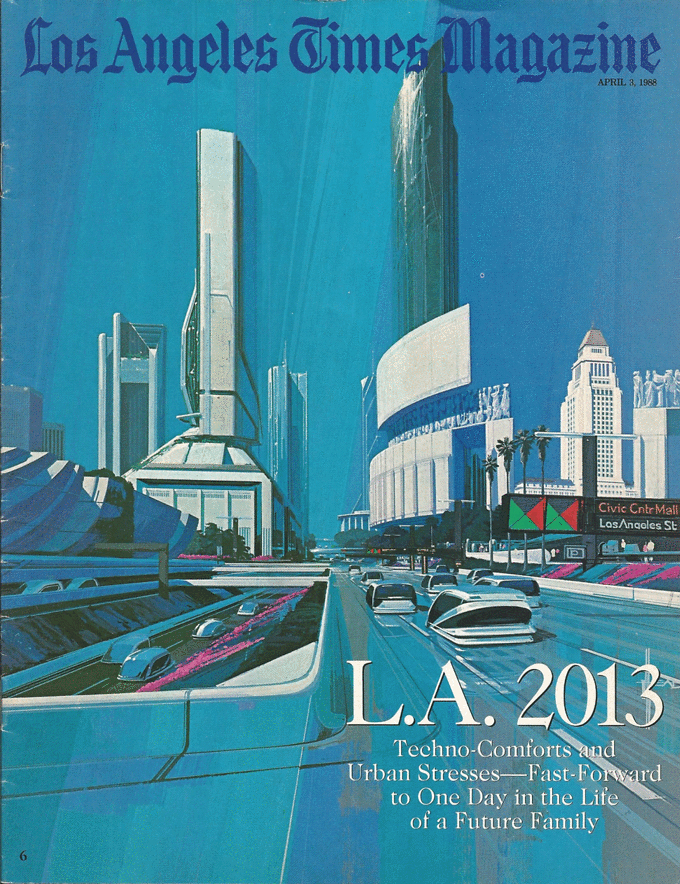 And while I don’t live in LA myself, I think Legal Insurrection readers who do will confirm the city of today doesn’t quite live up to its image of the future. We need to get back to appreciating that it is OK to want a stellar future…and then work for it without excessive government intrusion.

We languish. We no longer dream. Kids no longer see the possibility of living on the Moon or Mars or of expeditions to the outer moons and planets.

I got my bedtime extended to watch the original Star Trek. There was a euphoria that pulled us to do great things. It made us study hard. That’s gone. I don’t know if the space program is the answer, but it wouldn’t hurt. However, we have $16 trillion of gov debt and a socialist economy in decline. Maybe a space program would help that, as it helped us grow high-tech decades ago.

NASA went PC long ago when it started killing moms on the shuttle. They were unwilling to admit that space travel was/is extremely high risk, so they sent up moms. And it wasn’t enough to kill just one. NASA needs a thorough house cleaning.

As a species we need to get off this very vulnerable space rock. Heh. That’s moonbat talk to me. Isn’t that what Obama’s death panels are for?

Looking at 2011: A Space Odyssey we see something that could NEVER happen today. The Federal Government and NASA took total, complete control over space exploration. Only ‘professionals’ had the ‘Right Stuff’ to conquer space and mere commercial enterprises were forbidden to even consider independent space projects.

Now, NASA is lucky to launch one or two satellites and manned missions are sold to Russia. Sir Richard Branson broke the Fed’s jackbooted controls and now other private enterprises are spending the money, making the advances and providing the hope.

To put it another way: Get the Government out of the way so some REAL progress can be made!

Because it’s always a good idea to mess with asteroid orbits, which…however minutely, affect earth’s orbit, which, in turn will affect the lunar orbit. “The Moon is a Harsh Mistress”, if you’ve ever read the Robert Heinlein novel. Do we want space junk and space rocks free falling? Do we care about the consequences of our actions? Just ask the democrats. They’ll tell you, It’s for the children.

This doesn’t imply that I’m against space exploration, just don’t think it’s a good idea for a landing on what may turn out to be a very unstable piece of rock. Remember, Newton’s 3d law. The “Newton was a badass” speech in Mass Effect 3 comes to mind:

Russia got one by doing nothing. That’s what I call ‘In Your Lap Astronomy’.

It’s too bad NASA isn’t working on roping an ‘asseroid.’ Perhaps if they did, we’d get good enough to quickly rope the two asseroids living in the White House.