Is #OpIsrael invited to CUNY’s Homonationalism and Pinkwashing Conference?

Is #OpIsrael invited to CUNY’s Homonationalism and Pinkwashing Conference?

We have written numerous times about the depraved “pinkwashing” narrative, that Israel must be condemned by gay rights activists for publicizing the fact that it is the only country in the Middle East where gays are not persecuted.

That simple truth is too much for the anti-Israeli activists to bear because it exposes their hypocrisy and lack of principles in joining forces with Islamists and other true homophobes:

On April 10-13, 2013, the City University of New York will again host a Conference on Homonationalism and Pinkwashing. 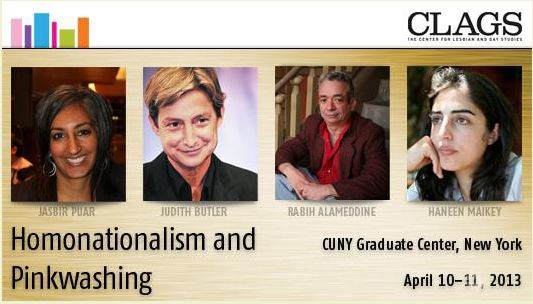 Understand that this is a concept born completely in academia and pushed by university lecturers and professors.  From the conference website:

In keeping with the tradition of the City University, the City University Graduate Center and the Center for Lesbian and Gay Studies, THE HOMONATIONALISM AND PINKWASHING CONFERENCE is a pioneering, historic event, uniting a uniquely diverse array of speakers from many countries, ethnicities, nationalities, genders, ages, communities, universities, and academic fields in discussion around a new arena of thought.  The dynamic outpouring of interest from scholars of all racial, cultural and religious backgrounds reveals that Homonationalism and Pinkwashing are pressing, urgent and inspiring topics of academic work internationally. This conference, which sold out six months before its date, is already significant, respected and pioneering in burgeoning arenas of academic study and inquiry.

While the conference purports not to be directed solely at Israel, in fact Israel gave rise to the “pinkwashing” charge and has been the focus of prior conferences.  This is pure anti-Israeli agitation with an academic façade.

Andrea Weiss in The Daily Beast pretty well summed up the absurdity, A Trojan Horse in CUNY’s Center for Lesbian and Gay Studies?

First, a brief review of LGBT rights in the Middle East:

In the United Arab Emirates, Yemen, Iran, and Saudi Arabia, homosexual sex is punishable by death.  In Kuwait, Palestine (Gaza), and Lebanon the penalty is 3-10 years imprisonment.  In none of these countries is same sex marriage or cohabitation or adoption of children legally recognized; the same holds true in Syria, Jordan, Iraq and Palestine (West Bank).

Next, a pop quiz: which of the above eleven countries is the Center for Lesbian and Gay Studies (CLAGS) at the City University of New York targeting in a two day conference next April, in order to criticize its position on LGBT rights?  The four where homosexuality is punishable by death? The three where the penalty is imprisonment?

No, the correct answer is the one where lesbian and gay marriage is recognized and there are laws on the books protecting LGBT people from discrimination.

Is the Pinkwashing conference anti-Semitic?  Alan Dershowitz makes the charge.  When anti-Israeli academics focus on the least guilty country, when they obsess only over the Jewish state, when they almost entirely ignore that their compatriots actually do abuse gays — the myopia cannot be excused.  The next hate fest:

The conference’s coordinator and inspiration is gay activist Sarah Shulman. In a New York Times op-ed and elsewhere, she has argued that Israel’s positive approach to gay rights is “a deliberate strategy to conceal the continuing violation of Palestinians human rights behind an image of modernity signified by Israeli gay life.”

In other words, she accuses Israel of feigning concern over the rights of gay people in order to whitewash — “pinkwash” — its lack of concern for Palestinian people.

This absurd, obscene argument is nothing more than anti-Semitism with a pink face.

Israel is easily the most gay-friendly country in the Middle East, and among the most supportive of gay rights in the world. Openly gay soldiers have long served in the military and in high positions in both government and the private sector.

In the West Bank and Gaza, by contrast, gays are murdered, tortured and forced to seek asylum — often in Israel. Indeed, in every Arab and Muslim country, homosexual acts among consenting adults are criminal, often punishable by death.

But all this doesn’t matter to the “growing global gay movement” against Israel, which (Schulman insists) regards these positive steps as nothing more than a cover for malevolent Israeli actions.

Schulman makes no secret of her irrational hatred toward Israel, which she calls “a racist government” that is “cynically” pinkwashing the occupation.

Is it absurd to suggest that #OpIsrael hackers would be invited to the conference?  Why would that be absurd?

Because many of those hackers are from Arab countries where gays are in hiding, in prison or in exile?

That makes perfect sense in the world of Pinkwashing conferences … whatever it takes to demonize Israel.

People who would time a mass cyber-attack on Israel to coincide with Holocaust Remembrance Day, and who would attempt to hack an Israeli children’s cancer group and the Yad Vashem Holocaust museum would fit right in at the Pinkwashing conference:

Accepting the award for #OpIsrael at CUNY’s Homonationalism and Pinkwashing Conference is Muhammad Al Kaboom!

“…uniting a uniquely diverse array of speakers from many countries, ethnicities, nationalities, genders, ages, communities, universities, and academic fields in discussion around a new arena of thought.”

They will be as diverse as a gallon of homogenized milk.

And that “new arena of thought” is as old as race hatred.

Obviously the answer is clear – Israel needs to strip a few gay men bare and stone them. And just to make sure they sink to the level of their Arab neighbors the victims should be Palestinians looking for safety.

In addition to anti-Israeli issue, there’s another dimension which should be brought out. Clicking on the conference website in the post took me to:

Homonationalism is a term coined by Professor Jasbir Puar of Rutgers University to describe a recent global phenomenon of great interest to scholars. Homonationalism occurs when sub-sectors of specific gay communities achieve legal parity with heterosexuals and then embrace racial and religious supremacy ideologies. The most obvious examples are in the Netherlands, Britain and Germany where white gays, most often males, increasingly join racist movements against immigrants and immigrations, especially from Muslim countries. However, Homonationalism is increasingly present in Nationalist ideologies across the globe, as secular right-wing forces increasingly leave anti-gay politics to organized religion.

These are significant changes in the positioning of white gays in relationship to supremacy ideologies and are necessary to study in order to have a realistic understanding of how vastly different conditions for LGBT people are globally, based on race, religion, gender and geography.

Translation: Homonationalism is a term concocted to intimidate wavering homosexuals from leaving the Leftist plantation. Apparently being gay is no longer an exemption from the original sin of white male privilege.

I stand with gay conservatives and libertarians against those who would intimidate them.

As I’ve mentioned before, I work with a gay conservative guy who lived in Saudi Arabia for a few years as a teenager when his microbiologist father worked in a hospital there.

He has to be one of the most decent, fair-minded people I’ve ever met.

He saw how women were treated there and he knows how gays are treated in the Middle East outside of Israel.

I showed him a prior pinkwashing post here at LI some time ago and he just moaned and shook his head. “Idiots” and “morons” were some of the nicer things he had to say about the anti-Israel charges of the pinkwashing brigade.

I am put in mind of the pre-war Nazi spin-up, and how some of Hitler’s MOST vicious formations of supporters were German homosexuals. There could be some tie-ins that work in that direction. Worth a thought.

Pure and simple homosexual hatred of The Other.

1. The rights described in the Declaration of Independence are awarded to individuals, not to groups.

2. If someone behaves decently and views their individual identity as more important than group identity, I’ll endeavor to treat them as an individual.

3. Common sense indicates that there are statistically meaningful differences between certain aggregates of human beings. If it hasn’t already, microbiology may soon identify genetic bases for such differences.

I’m confused about how those statements (with which I agree, generally) have anything to do with my observation from history (which suggested no conclusions).

Because if you’re gay, or black, or female, or whatever other non-chosen status, somehow that requires you to embrace leftist-framed political paradigms, victimology ideology, and other academia propaganda? What kind of crap is that?

[…] » Is #OpIsrael invited to CUNY’s Homonationalism and Pinkwashing Conference? – Le·gal In·… […]

The biggest scam in the world is the treatment of homosexuals in Islamic countries. Those places are hotbeds of homoeroticism, and their hatred of the female is demonstrated by the denial of her being through the burqa and other delights.

Even more, the Islamic idea of paradise is much the same as Stonewall’s and NAMBLA’s with a hefty side order of female rape. Boys with skin like pearls are there for pleasurable banging. Meantime, the women get the dubious pleasure of an eternity of first time train sex in which one guy runs a train of 72 raisins, er, virgins.

Besides, “men for sexual pleasure and women for childbearing” is as Islamic as halal meat.

So, we might think its crazy that so many homosexual groups have thrown in with the anti-Semites, but I think they know on which side their bun is buttered. Given a choice between the people that brought you the story of the destruction of Sodom and the people who are killers of homosexuals, even as homoeroticism is at the heart of their social behavior, homosexuals choose the “men for sexual pleasure” crowd. Likely, they pin their hopes on the full emergence of the Satyricon that is Islamic society.

This is a good point. There is decided schizophrenia of thought in these countries. Pashtun boy-lovers, anyone?

In Kandahar, birds fly with one wing.

This & other ‘conferences ‘ are just pick up junkets subsidised by the taxpayer.

Three of the 4 pictured will have to put a bag over their head to get any action . Number 4 looks a little neat . The sort that irons everything in sight.