There was a lock down of the University of Rhode Island campus in Kingston today after reports of a possible gunman on campus.

The Providence Journal had live coverage including a Twitter map showing locked-down students tweeting about the experience: 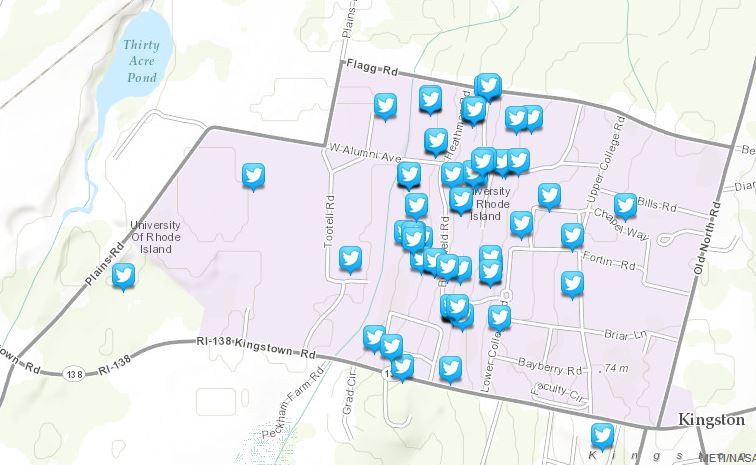 Turns out there was no gun or gunman found, and investigators think it may have just been a Nurf Gun game, via ProJo, No gun seen or found at URI; students’ game involved Nerf guns:

No gun was seen. No gun was found and State Police Capt. Frank Castellone said no one was ever in danger.

After an extensive search and investigation by the R.I. State Police, South Kingstown and University of Rhode Island Campus police, there is no evidence of any gunman on the URI campus.

They did however find two Nerf guns that belonged to a student who was in the Chafee building auditorium. That was where a professor and another student reported hearing someone say, “I’m a nice guy, I have a gun,” according to Castellone.

There is a game going on this campus and others called Humans versus Zombies that involved students shooting each other with Nerf guns. Castellone says police are still investigating whether that game is connected with this incident. URI president David Dooley said the game has gone on for years without any problems but it may be reviewed in the future….

Castellone emphasized that no one actually saw a gun.

You sure it wasn’t Pop Tarts?

Maybe someone on campus had a picture of himself holding a BB gun on his phone.

What a shame if they end this fun game, which is played on many campuses.

“Castellone emphasized that no one actually saw a gun.”

….and trauma counselors are being rushed to the scene.

Anybody remember the movie ‘GOTCHA’???

Do they still have panty raids in college? Do coeds wear panties these days? That sounds like more fun than any nerf game.

Yeah, we had a nuclear warhead panic in my office today, but it was just a zucchini.

First thought when they came up dry…That’s one helluva way to get out of an exam….

My older two kids (19 and 17) have been involved these past two summers in a game of “Assassin” (Nerf). They break up into teams, they form alliances, they set up rules, they throw money into a pot and last one “standing” takes all. Played with nerf or water guns, it has been HILARIOUS to watch the strategy sessions, the midnight ambushes, actually moving out from behind their phones and x-boxes and DOING something.

And I have no doubt, before my next child (14) becomes eligible, it will be deemed…too dangerous. Because, nerf darts…they hurt.

My son played this game on BU campus. They’d have a blast. There was something about rolled up socks too though – I think the nerf guns were banned, and instead the students had to throw rolled up socks. Because nerfs were too controversial.

I’m not kidding about that. Even though they used to play in the evenings, and there were huge groups of kids that participated, the nerfs were banned after a few years because they were so suggestive of……..real weapons. After the game was changed to tossing socks it sort of died out altogether.