Perhaps the least shocking news ever.

As Robin Kelly (D-DailyKos) the Chicago Machine candidate  hides from debates and runs out the clock while the Chicago media twiddles its thumbs over her disappearance and ethics issues, Barack Obama has endorsed Kelly, via her Facebook page: 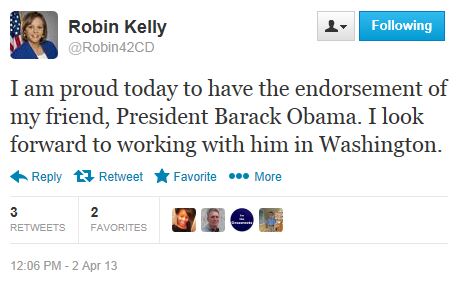 Meanwhile Paul McKinley is appearing at numerous events in the district, going on radio, and fighting against the Machine.  He also has picked up the endorsement of the Gun Owners of America.

The election is April 9. You can donate here.

“I am proud today to have the endorsement of my friend, President Barack Obama.”

Must have been Pres. Freakout’s evil white half…

Of course O’bammy is gonna endorse Kelly. After all, this is a Chicago thugfest!

Any new polling data? I find it sad that there is no polling; it’s as if the pollsters have all agreed that Kelly has it in the bag and there’s no need to look further.

Nine hours after her joyous announcement she has no more re-tweets than she did previously. Looking through her timeline she’s really pushing early voting. I am thoroughly convinced that early voting is an engraved invitation to voter fraud. I think it must be ended. Absentee or day of in person, but early voting is a menace.