Amanda Palmer, who grew up in Lexington, MA, is a graduate of Wesleyan University.

Two days before the Boston Marathon Bombing, Palmer “performed live at Wesleyan’s Humanity Festival, a one-day musical celebration in solidarity against bigotry, racism and social divisions within a community”: 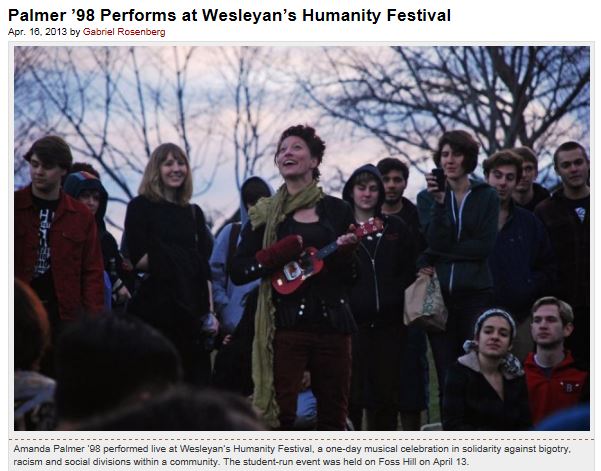 In keeping with the spirit of the Humanities Festival, after the bombing Palmer wrote a poem for Boston Bomber #2, Dzhokhar Tsarnaev, also known as Jahar. As if he wasn’t getting enough love already from his Twitter lovers.

Instead, I’m linking to this post at Gawker, Amanda Palmer’s “A Poem for Dzhokhar” Is the Worst Poem of All Time. You know if I’m linking to Gawker, I’m in a really ornery mood.

You also can see reaction at Twitchy.

Palmer’s poem also generated the Twitter hashtag #apoemfordzhokhar, at which people made up more “appropriate” poems for Dzhokar.

After killing many, a terrorist lies in bed, rather sickly – As the great orator Alan Grayson once said, “Die quickly” – #apoemfordzhokhar

Here’s the winner, in my mind:

You tried your best, Jahar, but here’s why you lose / You’re now in a hospital run by the Jews #apoemfordzhokhar

MT @jtlol “You tried your best, Jahar, but here’s why you lose / You’re now in a hospital run by the Jews” –>> And we have a #winner

“you don’t know how little you’ve been paying attention until you look down at your legs again.”

Did you see the carnage? You stupid stupid girl.

These idiots should be required to spend a day with the families who lost their loved ones, starting with the little boy’s family.

Not a single reference to the exquisite beauty of the Caucasus Mountains, marred only by the the invasive Creeping Jew plants.

A piece of advice for Ms. Palmer. Change your middle name again and move to Chechnya. Perhaps you should change the first and last name also. Oh, and don’t tell the Russians you’re coming.

Looks like Amanda Palmer has stirred an outbreak of Terrorphobic poetry in America.

Imagine if you had a son and he brought her home and said, “This is the girl I’m going to marry!”

Gawd, I’d love to play a practical joke on someone along those lines.

Any chance we can get Sandra Fluke together with her on stage?

What a dynamic duo that would be.

Speaking of getting “together with her on stage”. Another piece of advice for Ms. Palmer. Don’t ever book a gig with Ted Nugent.

Did you see the video loop at the bottom right in the Gawker piece? Hilarious.

Political correctness as performed by an ignorant fool. And a dangerous message to the unfortunate youth who haven’t been brought up to discern the difference between reality (loss of legs or arms) and some dreamy falsehood (we’re all one loving, global community).

When 2-D Julia gets fleshed out to 3-D … you get Amanda Palmer.

Is the world becoming crazy or am I losing my mind?

Amanda Palmer ’98, the pride of Wesleyan, should be forever linked to Wesleyan. And vice versa.

When does Amanda Palmer, Wesleyan ’98, grace the nation with an ode to Reproductive Freedom Warrior Kermit Gosnel?

I wonder if Amanda would like to share her poem with the parents of that little boy waiting to meet his father at the finish line who will forever remain 8-years-old?

His brain damaged mother, and his sister–who is missing a leg.

This woman should be sentenced–yes, sentenced, by her Wesleyan peers–to working with our vets who have lost limbs–from the IEDs thrown by Muslim terrorists.

Bet she would be writing a different poem then.

This has me wondering.

Why would those would be terrorists in Canada feel the need to waste their time trying to derail a train when so many in the West have gone off the rails already?

Willingly, of their own accord. I mean … do you need the caboose, too?

Who the hell is Amanda Palmer, and why is anyone giving her puerile drivel any attention in the first place.

Amazing what the self-important, brain dead say in the warm, fuzzy embrace of the United Sates. Send her ass to Russia to prate of humanity.

Let them sing, let them dance, let them tell poems.

Let’s talk to them after they start getting their legs blown off.

Professor: Here I used to believe that you had a serious blog, one that focused on the issues! Instead, we now find that you’ve diverted into a third world kind of sophistry of huh, combined with all the attributes of “what” and “wow” and isn’t that illegal or something?

This blog’s influence on my thinking peaked when the proprietor persuaded me to support Newt in the primaries (a decision which I do not regret).

I don’t know if you’re wight or if you’re wong, but it’s always good to have a mix of things. Wight?

Though there have been reports that Dzhokhar and Tamerlan Tsarnaev were registered to vote and there are entries in commercial databases indicating they were, they were not according to the documents available at the Cambridge Elections Commission.

No one has ever successfully struck a pose as an edgy poet while playing a ukelele.

Our last ukelele celebrity was Tiny Tim, and we all saw how that turned out.

Not that there’s anything wrong with ukeleles.

“No one has ever successfully struck a pose as an edgy poet while playing a ukelele.”

When she watches National Geographic documentaries, she roots for the lions.

Gracious me, look at what a diverse audience she attracts!

Kinda gives new insight into her “bigotry, racism and social divisions within a community” stance, doesn’t it?