A Culture of Death is their choice

A Culture of Death is their choice

With each passing day, the testimony at the trial of Philadelphia abortion practitioner Kermit Gosnell gets more gruesome — events which shock the conscience.

From The Daily Mail in Britain:

[Stephen] Massof, who is awaiting sentencing after  pleading guilty to the murder of two  newborns at the clinic, revealed Thursday  that he witnessed an abortion  at 26 weeks – two weeks beyond the 24-week limit  in the state.

He also claimed he saw about 100 babies born  alive and then ‘snipped’ with surgical scissors in the back of the neck, to  ensure their ‘demise’….

From the local NBC station:

Sherry West began working at Dr. Gosnell’s clinic in late 2008 after working as a surgical technician at the Philadelphia Veterans Affairs Medical Center…..

West testified that once during an abortion procedure, she was very disturbed when a baby made a screeching noise. She said it was not fully-developed and “it sounded like a little alien. It really freaked me out,” West told the courtroom.

A medical assistant told a jury Tuesday that  she snipped the spines of at least 10 babies during unorthodox late-term  abortions at a West Philadelphia clinic.

Adrienne Moton’s testimony as part of her  guilty plea to third-degree murder, came in the capital murder trial of Dr.  Kermit Gosnell, the clinic owner, who is on trial in the deaths of a patient and  seven babies.

Prosecutors accuse him of killing late-term,  viable babies after they were delivered alive, in violation of state abortion  laws.

Gosnell’s lawyer denies the murder charge and  disputes that any babies were born alive. He also challenges the gestational age  of the aborted fetuses, calling them inexact estimates.

Moton, the first employee to testify, sobbed  as she recalled taking a cell phone photograph of one baby left in her work  area. She thought he could have survived, given his size and pinkish color. She  had measured him at nearly 30 weeks.

‘The aunt felt it was just best for her [the  mother’s] future,’ Moton testified.

Gosnell later joked that the baby was so big  he could have walked to the bus stop, she said

From Delaware Online via Hot Air:

And Lynda Williams, 44, of Wilmington, said Gosnell taught her how to flip the body of the baby over and snip its neck with a pair of scissors to ensure “fetal demise.”

Williams also testified that she followed Gosnell’s orders one time, when Gosnell was away either running, swimming or working at a clinic in Delaware, and took a baby that was delivered in a toilet and snipped its neck.

“It jumped, the arm,” she said, showing the jury by raising her arm.

You will read little of this in the paper of record.  The NY Times has run only one story on the case in the last 30 days (h/t @Iowahawkblog). 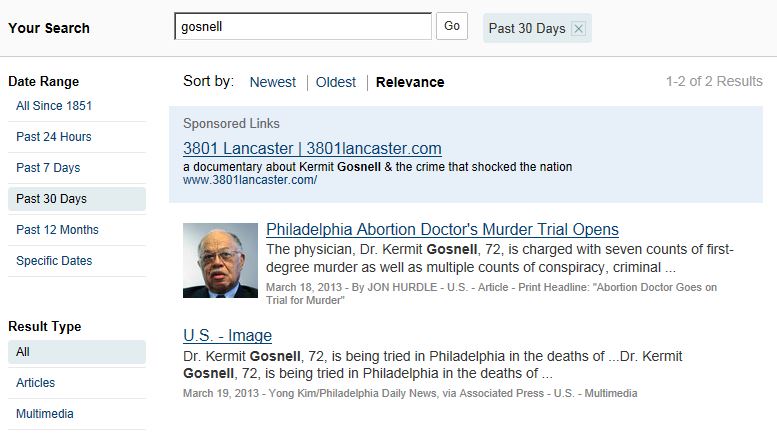 That story, from March 18, Abortion Doctor’s Murder Trial Opens, focuses almost entirely on the defense’s side of the story, including the race card:

His lawyer, Jack J. McMahon, described Dr. Gosnell as dedicated to treating the poor and accused prosecutors of racism — “a prosecutorial lynching” of his client, who is black.

“It’s an elitist, racist prosecution,” Mr. McMahon said. “This black man is being taken because of who he is and where he works.”

You can read about it at The Washington Post, but only through an opinion piece and reprints of AP stories which focus on the supposed good intentions of Gosnell:

“I believe that Dr. Gosnell was honestly trying to help women and protect them from abuse and neglect,” Massof, a prosecution witness, said on cross-examination.

The statement came in questioning about why Gosnell kept fetal samples, including severed feet, in jars at the clinic. Massof said that Gosnell measured the feet to estimate gestational age, which could help confirm or disprove sexual assault allegations. Prosecution experts have said there are no sound medical reasons for an abortion provider to do that, when blood and other samples can be stored. 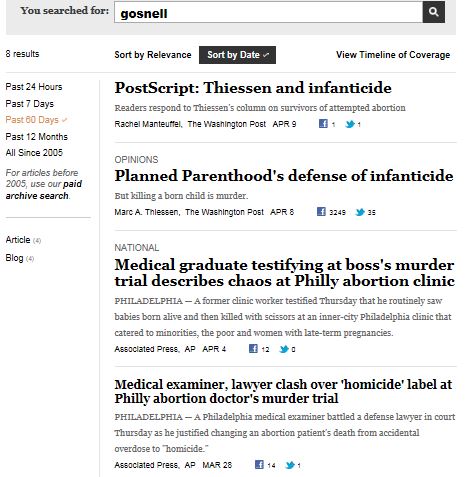 What is mind boggling is that Dr. Gosnell’s hellish corner of Philadelphia wasn’t discovered because someone finally decided to report or inspect his abortion clinic. Federal agents raided Gosnell’s  abortion clinic on the suspicion he was distributing prescription drugs illegally.

One would think this would generate some interest from the mainstream media, if not for anything but the sensationalism of it (Dr. Gosnell kept severed feet of the aborted babies in jars at the clinic for example), but no, ABC, NBC, And CBS have ignored it.

If you can stomach it, here is a gallery of pictures from the jury report, including the severed feet.

It’s not for nothing that we have reached this point when Planned Parenthood fights laws seeking to protect infants born alive after an abortion procedure:

As Mark Thiessen — the author of the WaPo opinion piece linked above — noted, this is part of a pattern whereby pro-choice groups and supportive media fight every and any attempt to protect infants born alive.

I have a friend in Phillys DA office who warned me last year the testimony in this trial would be horrific. I think he understated the case. The sad reality is that media can’t allow this trial the coverage it warrants because the damage to the abortion cause would be – well, horrific.

There is also the campaign of the abortionist from Montgomery County to consider. Will Allyson Scwartz protect her fellow abortionist if she should manage to displace Tom Corbett next year? I shudder at the thought.

You are right about how horrific this is. I can’t even read some of the accounts. If this were to get widespread dissemination, abortion would be something form the past. There is no way someone could call the fetus an “nonspecific clump of cells”.

the pictures have gotten to me, trouble sleeping and stuff. very mad over it.

should clarify that, pictures that some news agencies show.
I am not involved in the trial or anything.

“The only thing necessary for the triumph [of evil] is for good men to do nothing.” Edmund Burke

Look how many people did nothing.

There were communities in Jesus day whom he condemned. There is such a thing as communal guilt, and I must share in it for not working harder to help stop this evil.

A Republican Governor, ” The grand jury report suggests that Tom Ridge, Republican governor from 1995 to 2001, discontinued inspections because prochoicers claimed they were too burdensome. “* had a hand in this. Although it’s not clear that had there been inspections things would have changed. Got to hand it to those socialist-progressive-liberal-Democrats. Once they go on message they know how to stay there.

The article below suggests that it was the ant-abortion people nipping at abortion rights who are to blame. They suggest that surely if cheap publicly financed abortions had been available earlier women wouldn’t have sought late term abortions later. I suggest it is the other way around. Because they knew they could get a late term abortion they didn’t bother earlier. Either way I can not imagine the guilt a woman feels once she finally realizes the enormity of what they have done.

Important, too, the remember that the “work” of Gosnell was warmly protected by the most radical pro-abortionist EVAH in the U.S. Senate…now Pres. Not Dictator…Barrackah Obama.

Recall his advocacy of death in the Illinois legislature.

Now, tell me the Nazis were unique in history.

This is actually on tape. Few want to know about it .

think this is what you refer to
http://www.conservative-media.com/video/1120/Obama-argues-against-Born-Alive-legislation-in-IL-senate

The pro-aborts can’t come up with a way to control the language any more, so they have to be silent. They can no longer say it’s a choice because it is a child.

Can you say, “Abortion mill”? I knew you COULD…

The media can’t cover this. All available reporters in the area have been assigned to the Rutgers mean coach case.

1. “Let’s stoke public outrage over Gosnell’s atrocities so as to get all abortions banned.”

No no…the anti-abortion side would never ever descend to that. 😉

2. Gosnell’s alleged atrocities, of course, until a verdict is reached.

What Gosnell did or did not do, does not diminish the crime of elective abortions. If he is proven guilty, then his crime will only serve as a visual reminder that pro-abortion men and women have made the wrong choice. Elective abortion is premeditated murder of an innocent human life. It is never a legitimate choice. A human life evolves from conception to grave.

In America, despite equivocation and rationalization by the court, it is both a human and civil rights violation to deprive a person of their unalienable Right to Life — from “creation” — without cause and without due process. Violation of this basic Right, especially for capricious and selfish reasons, serves to devalue human life.

The assumption of innocence is UNIQUE to the criminal law.

It is NOT tortured to suspend reality. Gosnell did what he did, regardless of a criminal verdict.

Huh. It’s strange how much a “glob of cells” looks like a human baby.

Look at this murdered baby. We have to ban abortions from the moment of conception. Even during rape, the miracle of life can begin.

IMO Joan Q. Public, dissatisfied Democrat voter, hears stuff like this and thinks These people are nuts! Better to stick with the devil I know.

I don’t blame her.

then you are as complicit as she is.

2. The tragic thing is that it’s entirely feasible to formulate a position on abortion which is acceptable to most American voters.

But the opportunity to look righteously unelectable is too juicy for Real Conservatives™ to resist.

When professional extremists dominate a debate, the only thing they’d rather shoot at than each other is somebody who walks the middle ground. Compromise threatens their franchises.

If a”crazy Christian” shot Gosnell the coverage would be wall to wall.

Wait, didn’t MSNBC’s Melissa Harris-Perry say that these are our children???

Illinois State Senator Barack Obama supports the actions of this doctor and his employees.

If there is a gawd, a special place in hell must be reserved for human trash like Kermit Gosnell.

It just goes to show the almost total breakdown of moral standards that once made this a proud and strong nation.

We are now paying dearly…

Whilst I would have liked to visit the historical sites & the old architecture I never visited Philly because of the absolute fear of being murdered.

Sometimes I hate being right.

I am off to play my Stylistics LP.

Is the Gosnell trial pro-choice supporters’ Newtown? Media blacks out the death of hundreds. « truthandcommonsense.com | April 13, 2013 at 12:29 pm

[…] The butchery of infants born alive after abortions at the Philadelphia clinic run by Kermit Gosnell is gruesome beyond description, as described in my prior post, A Culture of Death is their choice. […]