Yesterday the Middle East changed forever, and you didn’t know it

Yesterday the Middle East changed forever, and you didn’t know it

Israel now is pumping natural gas from one of the enormous offshore fields which will transform Israel into an energy-independent nation and a global energy powerhouse:

On Saturday, hailed an “important day for the Israeli economy” by Prime Minister Benjamin Netanyahu, natural gas from the field was being pumped to a newly erected facility on the coast of Ashdod, connected to the gas field via pipelines laid out on the ocean floor, 150 kilometers long and 16 inches wide.

Commenting on the historic development, Netanyahu drew a link between the event and the holiday of Passover.

“On the festival of freedom, we are taking an important step toward energy independence. We have advanced the natural gas sector in Israel over the last decade, which will be good for the Israeli economy and for all Israelis,” Netanyahu said. 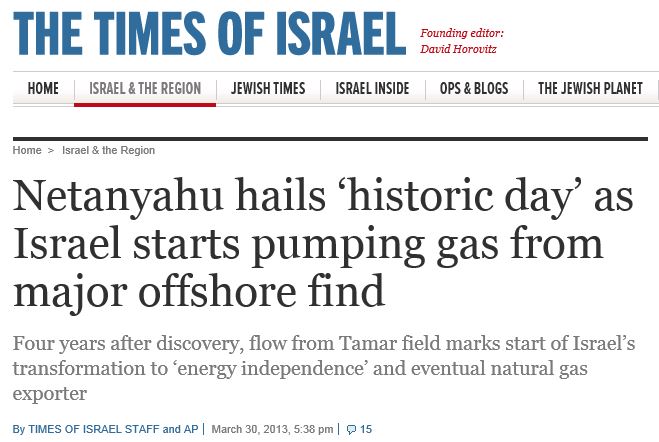 Israel’s new offshore fields are enormous, which is part of the reason Turkey has been so belligerent..

Combined with Israel’s under-appreciated status as a Demographic Superpower, Israel’s long-term status is fine.  It just has go get past Syrian WMD and Iranian nukes.

“It just has go get past Syrian WMD and Iranian nukes.”

Piqued oil…!!! I mock the Luddites and Druids of the Collective!

Hmmm, Syrian EMD. I wonder where those came from. Could those be Saddam’s?

Russia started talks with Israel soon after Israel got serious about drilling. China is partnering with the Jews on a cross country rail system and container depot in the Red Sea.

If the radical muslins think those two countries will NOT protect their interests/investments then expect a reduction of terrorist on a large basis.

Israel will also be faced by continuous security challenges as the gas infrastructure will be subject to terrorist attacks similar to those in the Sinai.

Still, it is an important step forward…

This may be a stupid question, but how is it decided who owns a resource that is situate outside of the country’s borders, in the Mediterranean?

That will give you a good start.

An energy independent Israel is the stuff of Islamist nightmares. Keeping the fields in their control may prove problematic, given the relative proximity of Cyprus (energy starved EU) and Islamist controlled Egypt.

Don’t forget Russia in this mix, or Turkey either. I believe that it was right after this discovery that the Russians started speaking with Damascus about a Russian port in the eastern Med. The Turks were very unhappy with Cyprus about their joining with Israel on this.

FURTHERMORE– You can almost see Ankara drooling over this discovery. What a gem it would be in their crown to have this energy source for the new Caliphate. The Saudi’s and Iran would have a 3rd player in their supremacy for the Muslim world, while the ChiComs infiltrate everyone’s software models and email. Nice to live in exciting times, eh? In the long term, Russia is screwed though – it can’t kill enough Muslims fast enough to stop themselves from becoming a Muslim state – soon; just like Europe. The walking dead.

Wonderful discovery and news of a new exciting future.

Think Barry had an inkling? Regardless, Netanyahu just voiced a raspberry..

Yes indeed things changed. Once Tamar pumps enough NG that Israel no longer needs to import Egyptian NG things really begin to change. When Tamar and the related fields pump enough NG that Israel can begin to export liquid NG to Europe (likely Italy and/or Greece), it will begin to shake Russia’s grip on European energy. That will have significant consequences.

If I were running Cyprus I’d be looking to develop the NG fields within its territorial waters toot-suite, to the point of giving some concessions on the banking biz, just to get the gas flowing. It’s for the same reasons: Cyprus would become energy independent very quickly and would begin to export to Europe. That makes both Russia and Turkey very unhappy even as it generates the revenues Cyprus needs.

Finally, some of these fields are in Egyptian territorial waters or economic exclusion zones. Let Egypt develop them and export the gas, and it could well serve as a moderating influence on Morsi and the Brüderbünd.

Egypt is already hurting for enough money to feed it’s people, loss of revenue from NG is going to put a LOT of pressure on the Muslim Brotherhood. Egypt needs food for it’s hoards of goatherds, which themselves are a useless commodity. What country needs another goatherd? Their Momma might love them, but nobody else. Cannon fodder, just like the mass of Chinese males that cannot find a wife due to the millions of baby girls slaughtered in the past 30 years.

Now if we could become energy independent. Dream big or don’t dream at all.

America has ALL the energy it needs for over 100 years. What we have to much of is homegrown terrorists called Liberals and Environmentalists.

Maybe they can start selling Natural Gas to the Canadians via the Keystone XL pipeline! /sarc

Four years from discovery to pumping?!
I love Israel.

So, was Bibi’s unwarranted apology to Turkey over the flotilla really a back-handed FU?

How do you think ? I thought of this but would need to know more about Turkeys energy supplies . They are very close to Azerbaijan which is a practical politically savvy supplier. They could receive buled s hipped LNG from Bahrain which is already setup.

Or they could be hoping to get the Cypriot fields .

I honestly can’t put it all together yet, but Bibi is a seasoned, crafty politician, so I can’t fathom that the ridiculous apology was rendered for naught.

Thanx for answering . I have heard that Israeli companies are pushing for more conciliatory gestures because they are trying to enter new propsperous markets chiefly SE Asia , South America & Australia .

I think America’s patience with Israel has finished. Whilst they will ensure Israel’s ultimate defence they won’t assist it with new entanglements. It seemed very emphatic .

Yes, Israel is employing free market capitalism to become energy independent, and I cheer them on. But, “America’s patience with Israel is finished?” Says who? Obama, liberals and progressives? So Gaza has potential gas fields, eh? So?

There have been gas politics in Europe for decades & LNG transport hubs . For example Britain has a port specifically built for large LNG ships from Bahrain .

To export Israel has to decide either via ship or pipeline. A pipeline to Turkey needs Syrian co operation. The Cyprian fields are a future resource that can bring down the price .
Also this is where the anti Israel boycotts can really hurt. It could be a buyers market.

All in all anything that lowers the international bullying of Saudis is good.

Energy updates: The Middle East has changed forever, and New Mexico shale may be America’s next oil boom | AEIdeas | March 31, 2013 at 7:51 pm

[…] According to William Jacobson at the Legal Insurrection blog, “Yesterday the Middle East changed forever, and you didn’t know […]

In May 2012 Netanyahu asked Australia for help in developing the Leviathon gas fields especially on the transport & export ftechnologies. Australia has a highly developed pipeline & bulk ship network plus the development of CNG – compressed natural gas

Woodside Australia was offered a 30% stake buying from existing stakeholders .

There also may be oil in the Golan.

I remember reading about the discovery. Seems like only a couple years ago.

I remember thinking–may or may not be true. Even if true, it’ll be a decade before it makes any difference.

Anybody else feel like they’re starting to feel conditioned to American media?

American media maybe ,but anyone with an interest in gas ( the term everyone else uses for LNG ) knew this field would be coming online 2014.

The Leviathon field is the newer bigger deal .

Even your guys hated people – the British – have info on Reuters Uk about Gazprom & Tamar fields .your less hated guys – Russians – have had articles & updates.

Most Americans still think the word gas = petroleum based . Hence the Beast got stumped at an Israeli pump station !

All I can say is, at the time, due to geo-politcal considerations, it did not seem feasible. If I recall, the initial news report mentioned the field was in “disputed waters”.

Aside: Americans hate Brits? Is that what your marxist masters teach you down under?

I quite enjoy the anti Brit rants on American conservative sites including LI. Most recently ‘There is no future for Jews in Britain. ‘ .

I am very much missing the anti French stuff .

I highly doubt you know anything about Marx Brownie but soldier on….