Two out of three ain’t bad

Two out of three ain’t bad

From Linda in Tennessee: 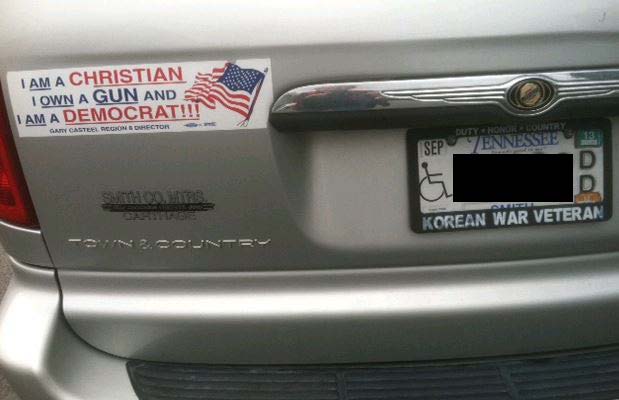 It figures that the America flag was displayed improperly with the blue field of stars on the right rather than the left.

The American flag is displayed properly, just like the flag patches on American military uniforms (only this one is waving in the breeze).

As for democrats who are Christians and own guns, they are a vanishing breed. Perhaps they will be listed on the endangered species list someday, and will have to fill out environmental impact reports wherever they go.

thanks for that link … interesting. This bumper sticker would have to be on the right side of the car to be proper, from what I read. But as a generic bumper sticker, the position of honor would be on the top left, with the blue field of stars on the left. I suppose a flag on a rear bumper is wrong in certain ways, but common.

Google says the name on the sticker is “Gary Casteel was elected to a third term as director of UAW Region 8 on June 16, 2010, by delegates at the 35th Constitutional Convention in Detroit”.

Hard to say if they deliberately displayed the flag backwards, but Democrats are certainly moving away from respect for American freedoms.

NO The stars are always on the left or forward. Your link refers to a shoulder patch. The reversal is so that the stars are forward. The flag is displayed incorrectly.

This person may be one of those rare Democrats (see: Zell Miller) who does not have their head stuck firmly in their nether regions.

Support for gun control among democrats has dropped significantly, according to a new CBS poll just out.

A major component of the NRA’s strength is that it has a single uniting purpose and thus has members from both parties and from every demographic.

In fact, every time liberals try to use the race card on the NRA it explodes in their liberal faces.

The Liberals created the KKK to suppress the black man.

The NRA armed the black man for self-defense against liberals.

The liberals thus hate the NRA.

It is iron clad history which can not be reputed by liberals.

Now the liberals are at it again, working to disarm the black man and the NRA is standing in their progressive way.

I think there might be a few Democrats that would disown this Democrat.

Rinardman, I agree with that view.

There in lies the dilemma for far left leadership controlling the Democrat party.

When a moderate Democrat finally realizes what has happened to what they thought was a reasonable party, they turn… and many, such as Andrew Breitbart and Ronald Reagan, can become their worst nightmare.

What I just said also applies to me… and to Professor Jacobson.

My mission in life is to wage legal insurrection on liberals… I am a former registered democrat who was a moderate. Now I am FULL BORE CONSERVATIVE…

To The Liberals I Say: Fill Your Hands You Sons-A-Bitches (figuratively speaking of course).

I note the license plate and frame (handicapped, Korean War vet) and surmise that the driver is most likely an older gentleman. He’s probably an old-time Democrat, which seem to be another breed altogether compared to the current crop of commifascists.

I worked for a guy who was a rabid Democrat. Funny thing was, though, we were equally conservative, both socially and economically. It was an extremely touchy subject with him. One day he made a comment that explained a lot. He told me, “I was a Democrat before I was a Christian.”

It’s missing a line:
“And I am none too bright!”

I would ask this alleged Christian how it is that he can support the party of abortion?

A testament to the human ability to simultaneously believe multiple contradictory ideas.

There is a tiny space beside the word democrat for someone to write down “why?”. This guy is a typical low information dim voter. You know, the ones who never questions their “betters”. These low information voting dims all get memos from the dims party every day teling them what the issue is and argument is for that day so they can follow through like the littel sheep that they are.

Being both a Christian and a Democrat would require one to have a gun.