Matthew Knee, former LI contributor and now at TargetPoint Consulting, sent this infographic showing what people are saying on “the internet” about Obama the past two weeks.

It’s mostly negative sentiment on several of the most talked about issues (spending cuts, guns, drones, defense, taxes) and slightly positive on jobs and the economy. The big surprises for me were the “women” and “education” topics, which both were very talked about and negative.

The graphic below illustrates the top issues discussed in relation to President Obama over the last two weeks (March 1st-13th), sized by volume and shaded according to average sentiment. This incorporates all mentions from the main (overall) media source, which includes news media, social media (excluding Twitter), and general websites (including the blogosphere).

Obama’s toughest issues were spending cuts, drones, guns, and assorted foreign policy concerns. The president’s most positive areas, on the other hand, centered around economic concerns and immigration. 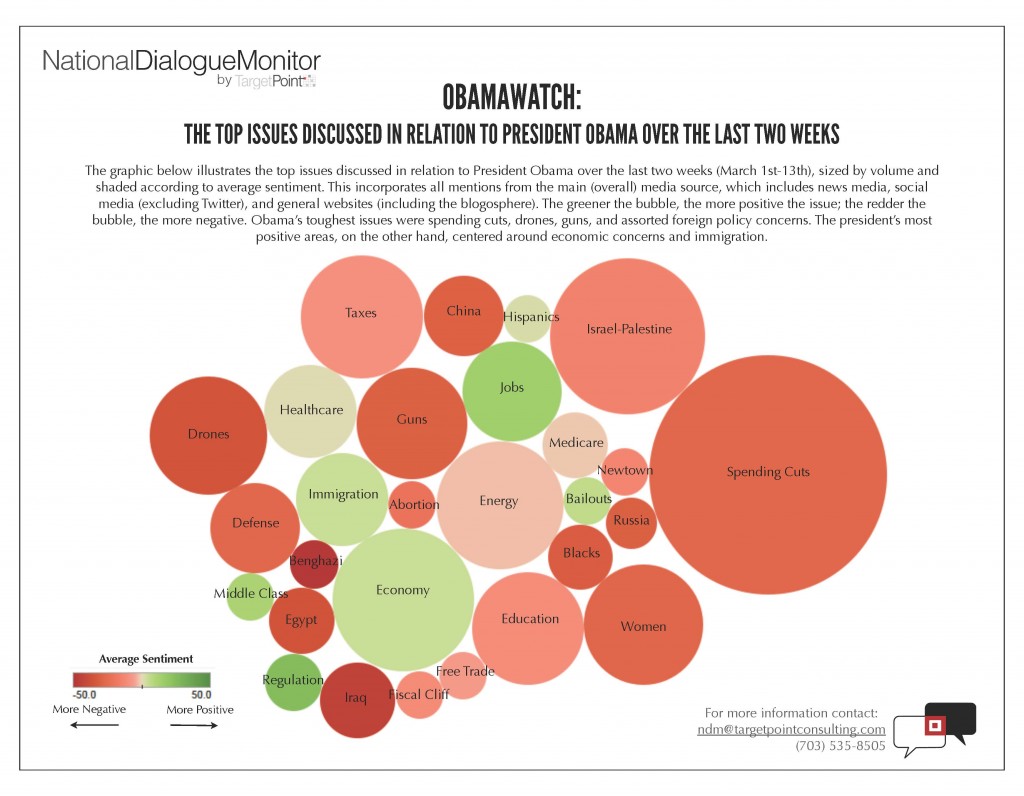 I’m shocked that the word, “regulation” would be listed as positive…

The minute I saw this graph I realized what the problem is with the so-called low information voters – they’re all colorblind.

There is a solution for this mess – move the Administration to the West Coast.

Didn’t see “hope” or “change” on it anywhere, however.

Would love to see this in an old fashioned pie chart.

All those green bubbles represent the media talking.

The greener the bubble, the more positive the issue

Keep in mind that this is a snapshot of the dialogue on the Internet. A lot of that (Solyent) Green color is driven by the Lefty Blogosphere and Twitter-istas, who think that Chicago Jesus is out there fighting for them. They are the deluded, the tech-savvy equivalent of the L.I.V.

Green bubbles on ‘jobs’ and the ‘economy’?

I’m tempted to laugh, then cry, then bang my forehead against the wall in frustration.

Oh Mitt, Mitt, you had such an opportunity.

If some conservative political consultant wants to redeem himself in 2014 and 2016, figure out why Obama can still get green bubbles on jobs and the economy, and then figure out how to do the same for Pubs.

Ironically, any truly conservative political consultant would not have to redeem himself, because they’ve been preaching good advice all along — it’s just that no one in the Romney camp or the GOP was savvy enough to listen.

Instead, they embarrassed themselves listening to Karl the Klown, and his ilk.

Does it get worse than being the body double for Satan as depicted by the History Channel in the hit series “The Bible”? Wow, just wow.

The best news for Obama this year:

Honestly, I think there’s truly something ‘wrong’ with this man. It’s common knowledge that he chronically drinks to excess, and I’m wondering if this – coupled with some kind of character disorder he suffers — compels Boehner to both make a public fool of himself, and compels him surrender his office to an abusive lunatic.

Boehner doubles down on stupid, and again assumes the lawn jockey position
http://thefinereport.com/2013/03/boehner-doubles-down-on-stupid-and-again-assumes-the-lawn-jockey-position/

I think Mr. Boehner has gone full-blown Captain Queeg on us! Or, maybe there’s something about Nancy Pelosi’s old gavel that makes the holder batsh!t crazy.

The way they hold the damn gavel (all of ’em) that I seen pics of, is creepy. A crazed Jared Loughner type look, all the while thinking: