The world that liberals believe in exists only on car bumpers

The world that liberals believe in exists only on car bumpers

Anodyne, nonsensical phrases seem to be the exclusive province of the left, which is no revelation given that leftist/statist philosophies are the triumph of wishful thinking over mathematical reality and physics.

Or so it seems to me.  But to verify to the degree possible whether this is indeed the case or merely my biased perception, I googled “right-wing bumper stickers” and scrolled through a good hundred or so, searching for similar idealistic idiocy.  True, there were several I’d consider unworthy of being associated with (like the birther stuff)—but none that struck me as childish as “Whenever there is a huge spill of solar energy, it’s just called a nice day,” which is the kind of thing found in abundance on left-wing sites.

Before shutting down my browser, though, I began wondering whether there were any liberal sites that evaluated conservative bumper stickers, and if so, whether their comments would be sufficiently insightful to merit a bit of rethinking.

Sure enough, I found a good site at Complex.com, where in November 2011 a Richard Boadu posted “The 25 Most Ridiculous Right Wing Bumper Stickers,” accompanied by photos of each followed, best of all, by his rejoinders that he no doubt intended as tart.

Working bottom to top, number 25 was, “If Obama is the Answer, it Must Be a Stupid Question,” which, pace Boadu, the evidence suggests is a completely defensible statement.  His comeback, however, is either deliberately senseless or unwittingly ridiculous.  What it’s not is useful:

And if Allen Iverson is “The Answer,” is the question also stupid?

Suffice to say, his retorts don’t get any sharper along the way, nor does his comprehension level.  Take number 13, for example:

Who Would Jesus Bomb?

Now, to most politically aware people of even average intelligence, this is a left-wing, not a right-wing, bumper sticker: an antiwar parody built on what left wingers think of right-wing religious thinking.  But since it comes with no owner’s manual, Boadu is left to comment:

Eventually we get to the gem that Boadu brings in at number four:

Thus does he demonstrate the same pathetic misreading as on Who Would Jesus Bomb?  Why he didn’t comprehend this is anyone’s guess, but if he had any doubts all he had to do was check the company named on the sticker, Northern Sun Merchandising—which distributes only liberal merchandise.

Anyway, what prompted this time-wasting foray into cyberspace was a tweet from (conservative) actor Adam Baldwin noting that someone named Laurie Saffian, identified as the director of something called Women Against Gun Violence, considers women to be “too stupid to have firearms.”

Baldwin links to an ABC News story about the growing number of women arming themselves and joining gun clubs, which the reporter counterpoints with input from Saffian:

“Let’s come together where we can around common sense solutions and laws that are really going to make a difference for women and are going to save their lives,” she said.

It’s tempting to compare Saffian’s intelligence to that of a rock, her maturity to a preschooler’s, and her grasp of history to Neville Chamberlain’s.  But that’s too easy.  Instead, what comes to mind is the incessant drumbeat about the dangers of rape and domestic violence in America that the feminist left has for years tried to turn into conventional wisdom.

Here’s Soraya Chemaly, “Feminist, Writer, Satirist… not always in that order”, in a Huffington Post post titled 50 Actual Facts About Rape (I love the “actual”):

That I believe these numbers are inflated is irrelevant.  What’s relevant is the danger level that feminists—including feminists like Women Against Gun Violence’s Laurie Saffian—believe America poses to women.

Which raises an obvious question: If rape is illegal but rapists commit it anyway, why on earth wouldn’t Saffian want every woman legally armed as a form of self-protection?

The answer, I’m sure, fits nicely on a bumper sticker.  Come to think of it: 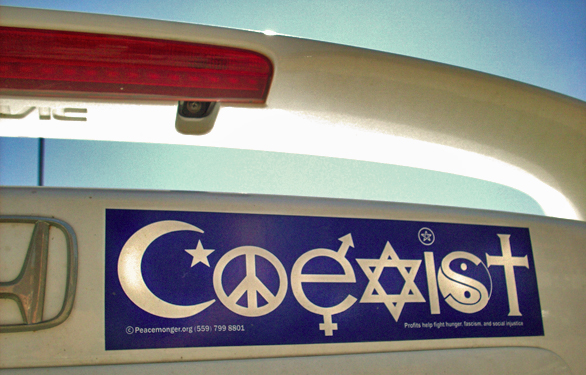 Headline of the Day! It doesn’t hurt that excellent writing follows it.

Agree 100%. I’ve really been enjoying Joel’s posts here – he was a excellent addition to the LI team.

The greatest aspiration for most liberals is to be a Disney character and live in Disneyworld.

Probably molesting the little children who come through the park.

No doubt while singing “It’s a Small World After All” …

I was at a meeting where an Episcopal priest asked “Who would Jesus Bomb?” as the ultimate crushing rejoinder, at least in her mind. I politely asked, “Sodom and Gomorrah?” Even the Libs present were laughing, though she was staring daggers at me.

To be completely honest, Sodom and Gomorrah were his Father’s schtick.

Who Would Jesus Bomb?
On Broadway, probably.
As a standup comic, yes.
As a magician, no.

I’d say the ‘Annoy a Liberal’ one is another leftie bumper sticker that this goon mistook for a conservative sticker. So that brings the count up to 3/25 of his ‘worst of’ list actually leftie stickers. Anyway, I really enjoyed reading through this post.

It’s tempting to compare Saffian’s intelligence to that of a rock, her maturity to a preschooler’s, and her grasp of history to Neville Chamberlain’s.

Don’t begrudge the woman a job. Their hard to find these days.

Lib-Lefty bumper stickers are always a strong ‘Tell’ on their absence of any grasp of human evil. Which, for this lifelong student of evil, is itself EVIL. Banal, vacuous, yet evil.

I’ve been stuck on the thought of “platitudes” since my mother died almost four years ago…..good Lord I heard enough platitudes during her time of ill health and subsequent death. I have discovered that people speak in platitudes when they have no clue just what to say…..and in the case of liberal logic they cling to their platitudes when their logic has failed. It is like a cat purring when you annoy them and the same as a “fraidy cat’ whistling past the graveyard. You know, self-comforting behavior. BTW, never heard the “solar energy spill” saying before……that is a perfect example of the rainbows and unicorn fantasy world of the left.

The ultimate lefty idiot was on Hannity’s show a couple of days ago. Quoting the Washington Examiner, “Zerlina Maxwell argued against women arming themselves, instead suggesting that prevention is key.
“I don’t think that we should be telling women anything,” Maxwell said. “I think we should be telling men not to rape women and start the conversation there.”

I almost fell off my chair laughing.

For those without a Science background, “a huge spill of solar energy” is not called “a nice day”, but a Carrington Event.

Most cars, trucks, and buses would just stop. Computers would die and the telephone system would not be happy. YMMV

If we had another solar spill like happened in 1859, people would not be happy.

Low cost recovery preps: Store old computers some place you cannot pick up a radio signal. Break it down to boards, etc, take all wires off. Wrap extra car electronics in something non-conductive and store in a cookie tin.

I cannot find the numbers on cause of injury or death for women compared to men. Any odds that women are a heck of lot less likely to be shot than beaten, compared to men?

So, the best thing to do is make sure women have no means of defense against a larger and stronger male?

Are the numbers inflated? Maybe, maybe not.
If the upper number of women raped is 1.3 million how is that every woman has a 1 in 5 chance of being raped?
It isn’t possible for both those numbers to be correct. The numbers are contrived; they are not facts.

Thank you, Mr. Engel, for pointing out an incongruity which has me baffled senseless.

To quote:
“…If rape is illegal but rapists commit it anyway, why on earth wouldn’t Saffian want every woman legally armed as a form of self-protection?…”

The feminists have been raising Cain about this issue for decades now (and rightly so). This past Monday, a woman, a victim of a violent rape, was testifying during a legislative hearing in the Colorado Senate on the subject of the proposed ban on concealed-carry on college campuses. After the obscene way in which this witness was patronized and belittled by both Democrat AND Republican Colorado state senators during her testimony, I would have thought that the rad/fems would be camped out on the steps of the Colorado statehouse DEMANDING political heads and wallpapering the city with posters featuring any of the number of images on the Intertubes featuring pics of a gun-aiming woman and the caption “This is MY rape whistle.”

DYSPEPSIA GENERATION » Blog Archive » The World That Liberals Believe in Exists Only on Car Bumpers | March 7, 2013 at 9:31 pm