Two of the Republican Senators most demonized by the liberal media, Ted Cruz and Rand Paul, are doing the job liberal politicians and media refuse to do out of loyalty to Obama.

On Tuesday, the Department of Justice sent shockwaves through the nation when Attorney General Eric Holder informed Sen. Rand Paul (R-KY) in writing that the White House would be within its legal authority to execute an American citizen via drone on U.S. soil if that person was determined to pose a threat to national security. On Wednesday, testifying before a Senate panel, Holder was prodded repeatedly about this assertion by Sen. Ted Cruz (R-TX). Holder eventually admitted that it would not be constitutional to execute an American citizen without due process.

Meanwhile, Rand Paul is leading a good old-fashioned speaking filibuster against John Brennan based on the Obama administration’s position on using drones to kill Americans on American soil without trial:

Paul, who strongly opposes the Brennan nomination and the Obama administration’s use of unmanned aerial drones, becomes the first senator to make use of the procedural tactic in more than two years and the first to do so since the Senate approved a bipartisan rules reform package in January.

“I will speak until I can no longer speak,” Paul said. “I will speak as long as it takes, until the alarm is sounded from coast to coast that our Constitution is important, that your rights to trial by jury are precious, that no American should be killed by a drone on American soil without first being charged with a crime, without first being found to be guilty by a court.” 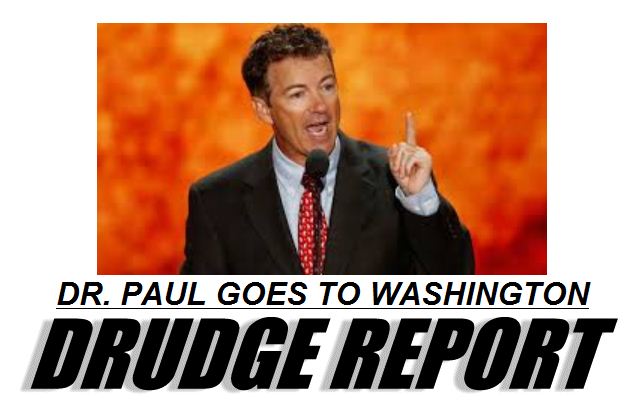 Sen. Rand Paul (R-Ky.) proposed a law that would nullify any executive gun control actions by Obama, accusing the president of having a “king complex.”

(added) SPLC even put Paul on a 2011 list of Electoral Extremism: 23 Candidates on the Radical Right.

Paul cannot and will not go on forever, but as of this writing, he’s still talking, joined as I write by Mike Lee and then Ted Cruz (live feed). Here’s some of his earlier recorded filibuster (via Gateway Pundit): 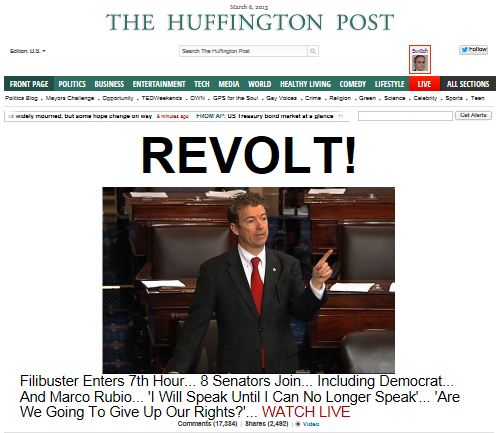 Anyone with the opportunity to listen to this should. It is inspirational and educational. Paul is talking about our rights and our Constitution as few do these days. And now Cruz is working with Paul, praising him and asking him questions. Good to see them working together and not apart.

It is virtually impossible to get anyone in this administration to utter a simple “yes” or “no” on anything of importance let alone the constitutionality of the topic.

That’s because when AG “My People” and the prez zap an American on American soil without due process, neither will have to watch this video played back To them in which he flatly states that it is unconstitutional to zap a citizen like he does foreigners on a regular basis.

Get ready. They plan to zap americns from the sky on American soil without due process.

I’m watching/listening to this filibuster as I type. Mike Lee, Ted Cruz and Rand Paul are asking each other to comment and respond to each other’s questions on the constitutionality of a drone strike policy that is ambiguous.

It reminds me of Hamilton, Jay and Madison writing each other letters as Publius, in order to argue in favor of the federal constitution. These comments should be published and distributed as a similar collection of documents. There is a constitutional lesson here that should be heard by all.

If the government can use drones domestically, why not hit squads? Why not bioweapons, etc?

Otoh, if the 9/11 plot had been figured out while the jetliners were airborne, should they have been shot down? If a nuclear weapon is determined to be hidden in an American city, should torture or similar methods be used to learn the details?

Maybe some contingencies are best left uncodified in advance.

This is not a slam-dunk problem.

VP Cheney ordered the downing of one of the airliners on 9/11, which was a really “gutsy call”.

One of the BIG issues here is the matter of time. Is there enough intelligence on a threat sufficiently PRIOR to allow a deliberative process?

Nobody would assert that we should NOT kill people who were in the process of committing a terrorist act, whoever they were. Not as a FIRST resort, for sure, but as a matter of necessity in many situations where nobody is going to submit to capture.

Yes, in some situations a president may have to do some very unpalatable, and perhaps illegal and unconstitutional, things to save the country.

But he’d darned well better be able to explain it.

If GWB had been given notice on the morning of 9/11 that a plane currently in the air had been commandeered by terrorists and was headed for the WTC, and that we just happened to have an Air Force fighter that could knock it down with under a minute to spare, then he would have had to make that call: and if he had authorized it, you can expect that the Democrats and the Media (but I repeat myself) would have required a clear explanation the following day. As it should be.

But with Obama, who’s going to compel an explanation if he (or Holder, or Big Sis) authorizes a drone-zap of an American citizen on American soil?

You see, that’s the problem. Our system not only supposes that our government is accountable, it supposes that there are people out there who can lead and require that accountability.

What if there isn’t? These days waiting for accountability about Obama is like listening for a tree to fall in a deep, deep forest. Paul, Cruz, Rubio, (occasionally) Cantor, a couple others — that’s about it on the Pub side. The rest are either cutting deals or don’t have the gravitas / skills to get the attention and make the point. And it’s not like the Media will do their job and get these voices out there.

We have not only a person problem, we have a systems problem.

IMO you nailed it.

Per Rags, one can visualize scenarios, 9/11-ish or worse, that are not slam dunks at all.

Unfortunately, as you note, when these wrenching situations arise, we the people can no longer assume that either the White House or most of the opposition are acting for the greater good as they see it.

It’s a horrible testament to our society that Senators have to filibuster on the Senate floor to protest an imperial president who unconstitutionally asserts that he has the authority to assassinate U.S. citizens on U.S. soil. Anybody who still believes that the individual citizen is the sovereign and the government works for US should be proud of these Senators, regardless of party affiliation. I could not be prouder that these Senators of my party are taking this stand.

Looking forward to Glenn Greenwald’s column on this. He’s wrong about 75% of the time, but he’s principled about civil liberties and will give credit where it is due.

Indeed, I just saw Ron Wyden (MY Senator from Oregon, who is a democrat) stand up in support of Rand Paul’s questions. My respect for Ron Wyden has increased, even though I still vehemently disagree with him on several issues. At least he understands the importance of our constitution and our inalienable rights. For that he has gained my respect.

The abomination is the Øbamanation. The Manchurian Candidate president is systematically dismantling the Constitution, and not in an incremental way.

How egregious does it have to get before somebody, some American patriot, calls for impeachment proceedings??

There have been such calls.

In the present reality, they are vain. There is no political will to push even the issue of voting out a bill of impeachment in the House.

It would be assured of a quick acquittal in the Senate, as well.

God bless Paul Rand for his courage and action in upholding his oath of office and defending our citizens. And the same for Mike Lee and Ted Cruz for joining Rand.

Finally, some Senators willing to stand up to this dictator want-to-be and defend our country and our constitution.

We should pay close attention to our elected representatives and their reactions to this, then vote accordingly.

If the U.S. knows of an eminent threat then it has received the intel from a knowledgeable source. This source should be corroborated with other intel. In other words, there will be some time before lethal action needs to be taken.

[…] Here’s video of the beginning, via Legal Insurrection. […]

[…] V: linked by American Glob see also Legal Insurrection for important notes on how the Southern Poverty Law Center tries to smear this […]

I want posters of the C-Span video above: “Ted Cruz Goads Eric Holder into Admitting…”

I want posters of both of these good guys. I want to put those posters right up I can see them all the time. They will help me get through the next three + years.

Be afraid. Be very afraid.

With he purchase of MRAPs, billions of bullets and now armed drones, that sound you hear in the background is the remnants of the Constituion being flushed down the toilet.

In a film that is starting to seem like reality was the movie Blue Thunder with Malcolm Mcdowell and Roy Scheider. City officials bought a modified helicopter to spy on citizens and provide maximum firepower to any threat city officials perceieved.

They were looking to create any threat, including assasination of those who got in the way so they could use their new toy. What kind of threat do you think the feds will create so they can use their new toys.

Did anyone else catch Paul’s mention of Hanoi Jane having her picture taken in North Korea during that war? And that under the current drone rules, Obama would have authorized a strike on her.

Now there is a hell of way to make the “drone strikes on American citizens on US soil” point!

As if making Barbarella was not sufficient cause.

Rubio joined in not out of principle but cuz he can’t bear not to share in the glory. Rand and Cruz are to be commended.

I heard that a drone armed with a cancer ray took out Chavez.

Who among us can say that we can have any belief that Buraq Hussein Obama would use the power to kill Americans at will to protect the country; when his every act since January 2009 has been to weaken the country, destroy the Constitution, and enslave Americans? A tyrant, seizing power in the name of protecting the people, is still and ever a tyrant.

And I, at least, take careful note that it was Rand Paul who stood up alone to defend the country and Constitution. He was joined by a pitiful few Senators; despised by the Left, and by the Institutional Republicans who stand by and do nothing to help those who fight.

Where are my Establishment RINO coward Senators – Alexander and Corker? They are probably apologizing to Senator Reid right about now.

Corker is having dinner with Obama tonight.

Tuned in to CSPAN 2. I am watching history.

I wonder how many civics classes will play this video tomorrow?

[…] William Jacobson pretty much predicted this would happen. […]