Shout out to Sen. Ron Wyden

Shout out to Sen. Ron Wyden

As a Palin Democrat, I would like to make an observation.

As I conduct much of my media outreach on Facebook, I noted many of my Libertarian and conservative friends are gleefully acknowledging the awesome awesomeness of Paul’s filibuster. 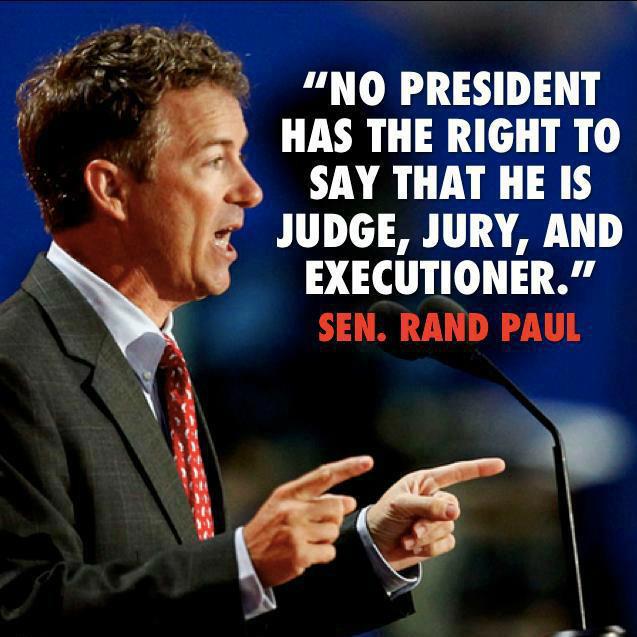 Now, I would like to shine the light on another, Oregon’s Senator Ron Wyden:

“It’s my view that the senator from Kentucky has made a number of important points today,” Wyden said.

“I want it understood that I have great respect for this effort to really ask these kinds of questions,” Wyden said. “And Sen. Paul has certainly been digging into these issues in great detail.”

I will concede that Wyden is no grand champion of conservative causes. However, this act merits at least as much respect, if not more, than Paul’s.

Because Democrats are known to stomp down hard on anyone who strays from the progressive orthodoxy (remember Joe Lieberman). So, by issuing statements such as the following, Wyden has firmly placed himself in the arena:

On Wednesday, Wyden said he would “pull out all the stops to get the actual legal analysis, because without it, in effect, the administration is, in effect, practicing secret law,” a comment that came as scrutiny mounted over the use of drones to target U.S. citizens abroad. Later Wednesday, President Barack Obama decided to provide classified Justice Department information to congressional intelligence committees on that issue. It’s a move that comes as John Brennan — who was intimately involved in drones-related decisions as Obama’s counterterrorism adviser — prepares to appear before a Senate panel for his confirmation hearings.

The eye-opening experience that this has been for the people of my party cannot be over-stated. Here ares some thoughts from one of Wyden’s constituents, Blue Oregon:

The fact that the Obama Administration is actually trying to make a legal argument that it’s okay to kill US citizens on US soil without due process, even if it’s meant only for extraordinary circumstances, is appalling. And yes, I voted for Obama. But this is just flat wrong and frankly, antithetical to what it means to be an American as far as I’m concerned.

So, I would like to encourage my conservative friends to take a little time out from the Paul-a-palooza and show a little love for the sassy Senator from Oregon, perhaps thanking him for having some backbone. His contact information:

Leslie, I’m one step ahead of you. I’ve been a lifelong reagan republican, and I wrote to Ron Wyden to tell him I appreciated the support of civil rights, even if I disagreed with him vehemently on many social issues.

I welcome any indications of sanity whatsoever.

Then, supposedly, on our side we have McCain and Graham making snide remarks about him.

Wyden opposes Internet censorship and he was great on SOPA/PIPA.

Sometimes I’d rather have a principled opponent than an ally whose motives I distrust.

gs: I caught that in Wyden’s record as well. As I have often said during my Tea Party activism: Better an honest enemy than a dishonest friend.

Speaking of shout-outs, Leslie, your fellow Democrat Walter Russell Mead gave one to the civic efforts you’ve been involved in in San Diego.

(OT: Mead strikes me as a conscience of the Democratic Party rather than a partisan. My main reservation is that he seems too optimistic that the country will solve its current problems. He may well be correct—obviously I hope so—, but IMO he underestimates the downside risk.)

Obama must have been awarded the Nobel Piece Prize

Done. And thanks, Leslie.

I don’t think either Obama or Holder have faintest idea of the concept of jurisdiction, and that our actions overseas have a different jurisdictional basis from those within our national boundaries.

I think The Emperor and My People absolutely do understand the jurisdictional problem.

They just don’t care about it. The obastard administration is a lawless organization.

Obama fed McCain and Graham last night and they went our performed their show for him today, just like trained seals.
What an utterly base and disgusting display of betrayal.

Yeah I heard that ObaMao served up RINO last night.

Say the word & OFA will organise for volunteers to turn up at a designated time & place to be droned. Some will hang out for a better iPhone but they will be waiting to be picked up by the bus.

Wyden will not get invited to a White House dinner anytime soon.

Neither will anyone on this site so he is in good company.

Ron is My Senator along withthe worthless Markely but on this I give him a thumbs up.

I thanked Senator Wyden via Twitter yesterday, but followed up with a voicemail to his DC office just now at your request.

I’m sure I don’t agree with most of his politics, but I’ve been aware he wasn’t a typical Democrat ever since he stood up for a Corvallis businessman who’d put up a mural insisting on independence for Tibet and Taiwan (the ChiComs had demanded the mural’s removal).

[…] torn on this one, there was one Dem who helped Rand Paul in his filibuster that has McCain’s Depends in a bunch and this guy says (Here’s the […]