Remember when this exchange was overheard by journalists about Israeli Prime Minister Benjamin Netanyahu?

Obama: “You’re tired of him — what about me? I have to deal with him every day.”

After four years of snubbing Israel’s Prime Minister, including grabbing dinner with his wife while Netanyahu waited, Obama has deigned to visit the longtime ally of the United States. The Los Angeles Times reports that this time, Obama’s on his own peacekeeping mission:

As President Obama prepared for his first official trip to Israel, he made a point of referring to Prime Minister Benjamin Netanyahu by his affectionate nickname, “Bibi,” in a TV interview….But after four years of public clashes, private entreaties and largely unsuccessful attempts to outmaneuver each other, no amount of backslapping is likely to alter perceptions that the personal rapport between Obama and Netanyahu has ranged from awkward to dysfunctional. The odd couple now will spend nearly three days trying to thaw their chilly relationship.

The official twitter account of the Israeli Prime Minister tweeted out this photo of Obama’s note in the guestbook at Netanyahu’s residence, which reads:

“It is a great honor to reaffirm the extraordinary bonds between our two countries. By every measure, from security to our economy, our cooperation has never been greater, and that in part is because of the strong commitments of Prime Minister Netanyahu. May our bridges continue to grow, on behalf of people and prosperity for all people.” 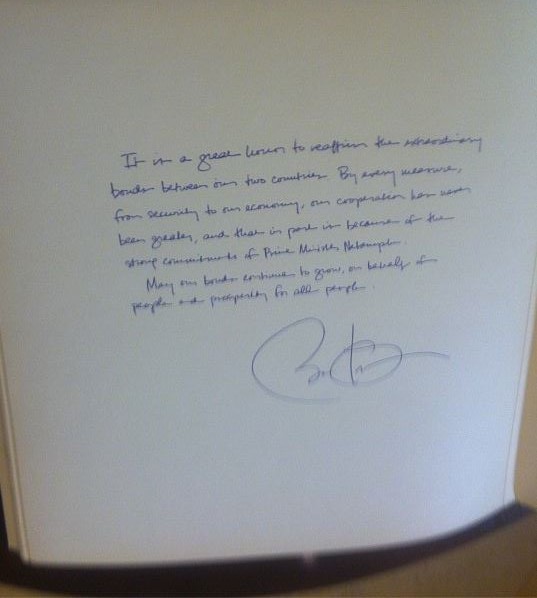 If only Obama had left out the “in part,” and the somewhat weak finish: “on behalf of people and prosperity for all people.”

An upcoming press conference between the two at 2:05pm ET will be broadcast live on the White House blog.

“…and keep your enemies closer.” I pray that Netanyahu is wise man and can see the community organizer for what he really is…!

why is the first family, including the damn dog, on this trip ? is this a sightseeing tour ? gee, I wonder how much more it costs to move the first family around vs just the POTUS ?

Obama should consider that if he needs to “deal with” Iran of possible nuclear weapons, having the Israelis do the job will mean that nobody will be looking to the US to do anything approaching “nation building” afterward.

Shucks, I was all cozy in my Obama-bashing, Real Conservative™ cocoon, and you went and distracted me about Iranian nukes.

Althouse has a piece up on how team unicorn couldn’t get the right fuel in the gov’ment motors armored chariot.

Another result of sequestration: obama’s limo driver had to make do without the presidential gas ‘filler-upper.’ You know, the guy who’s job is to make sure that no bad gas is given to the dictator’s, err, I mean president’s limousine…!

Carolineglick.com Read her column from yesterday, March 20; “Obama’s mysterious visit.” It’s all you need to know.

Benjamin Netanyahu deserves a Nobel for being able to maintain his composure while being in the same room with the man.

Obama’s visit has little to do with Israel per se. It’s about quieting the constant questions of why he hasn’t yet visited Israel.

Here’s an idea, champ: Park one aircraft carrier in the Mediterranean, and another in the Persian Gulf. Let the sailors and Marines get some fishing in while the Iranians wonder….