Watching Sarah Palin’s canny performance at CPAC the other day—and particularly the moment she held up that Big Gulp in a Statue of Liberty pose after a provocative double entendre about her “rack”—two words came to mind:

In a lot of ways, the philosophical parallels are striking.

Like Palin, Bruce enjoyed sticking his finger in the eye of what we called the Establishment, then waiting for the yowls from the stuck. These days, the people who once claimed to be anti-Establishment are its gatekeepers, so the vitriol directed at Palin for being a 1950s ignoramus comes from reactionaries who trip over their own hypocrisy—which is an irony that wouldn’t have been lost on Bruce.

Lenny Bruce loved liberty, abhorred arbitrarily imposed rules and regulations, and wanted just to be left alone to make anyone laugh who chose freely to hear him.  He wasn’t to everyone’s taste, true—no doubt he isn’t to Sarah Palin’s—but that was the whole point.

Seriously, which of the following Bruce quotes wouldn’t roll trippingly (adjusting for certain modesty constraints) off of Sarah Palin’s tongue?

• In the Halls of Justice the only justice is in the halls.

• The liberals can understand everything but people who don’t understand them.

• Liberals will buy anything a bigot writes. In fact, they really support hate mongers. George Lincoln Rockwell, the leader of the American Nazi Party, is probably a very knowledgeable businessman with no political convictions whatsoever. He gets three bucks a head and works the mass rallies consisting of nothing but angry Jews, shaking their fists and wondering why there are so many Jews there.

There is, though, one huge difference between Sarah Palin and Lenny Bruce: Unlike Bruce, the former governor isn’t going to self destruct.  She’ll survive and prosper, if only to keep driving her critics insane. 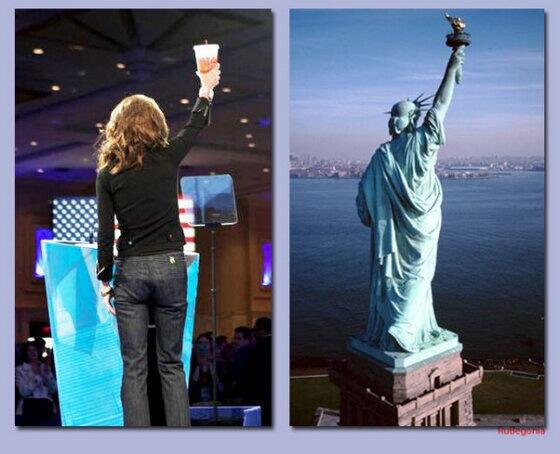 Something else I wanted to point out about Bruce and modern comics.

Lenny would never, ever, have written jokes for Kennedy or Johnson. Let’s be clear: Bruce was a man of the Left, but he was also very libertarian when it came to free speech and free enterprise. He hated the fact that the U.S. of his day was very corporatist and conformist (the late fifties, early sixties).

Fast forward to our time: Establishment Comics like Bill Maher, John Stewart, and Colbert cover for and cooperate with the Administration. Stewart’s writers even wrote jokes for the Obama’s appearances as the Radio Television Correspondent’s Dinner.

Lenny Bruce never would have done this.

I LOVE HER!!! No one gets under their skin more than Sarah Palin. She doesn’t need to run for office, as she can do more not running. She knows how to pick good, constitutional candidates (Ted Cruz) and she can bring together a crowd!! God Bless her and her family. The idiots that don’t like her CAN’T bring her down, because she’ll get right back up and start swinging.

I just love Sarah! I can imagine her saying any of the Lenny Bruce statements, totally unvarnished.

That double entendre “he’s got the shotgun; I’ve got the rack” was totally hilarious. Sarah can get away with saying this kind of stuff cuz she comes over as a totally real woman who appreciates all the goodness and badness God has given her.

“The liberties of the American people were dependent upon the ballot-box, the jury-box, and the cartridge-box,” Frederick Douglass once wrote. “Without these no class of people could live and flourish in this country.”

I love Sarah Palin. I can only hope to piss off as many liberty & freedom hating Obama-zombies as she has.

If the left doesn’t hate you, you are one of them.

Many Statists and some “conservative” pundits are saying that since Sarah Palin is only an entertainer, her views on political matters are no longer of concern.

Recently a funny thing happened on the way to the ballot box in Italy.

A new political party, whose champion was a former comedian, and who espoused a populist anti-establishment message with a vision for the future, ended up winning roughly a third of the seats in the Italian House and Senate.

The result? The establishment parties now have to kiss his ring every time they want to get anything done.

Now who is having the last laugh?

Yes, Sarah Palin has a wonderful sense of humor. At the same time, mixed in with that humor was some very poignant statements in her CPAC 2013 speech about the state of our affairs which not only resonated with the audience, but also far beyond.

I have no idea whether she plans on seeking electoral office in the future, or not.

However, there is clearly a growing sense of anger, frustration, upset and resentment among the “country class” towards the “permanent political class.”

She is the ultimate outsider. Her anti-establishment message clearly resonates and she can back it up with her life experience.

One can foresee the day, as the overreach continues, while the economy stagnates, that someone by the name of Sarah Palin figuratively decides to “throw a brick through the window” and lead we the people of the “country class” charging to the ballot box to take power back from the “permanent political class.”

One question: Will the present course of the RNC and House leadership split the Republican party asunder such that a new party arises and ultimately rides the resulting wave to power?

Only time will tell.

That “former comedian” in Italy isn’t so funny. Among other things, he’s a vile anti-Semite who wants to round up Jews—and not just in Italy.

The unbeauty of a parliamentary system is that it allows such scum to rise to positions of power. See, for example, Mussolini.

You support those who walk the talk, fight the good fight, and have the battle scars to prove it, with cash & accolades!

Sarah Palin’s SarahPAC has collected nearly $5 million in ‘each’ of the last election cycles and achieved the greatest political return on investment than ANY other person or group in the United States.

You betcha this woman could run this country like an American and not like these snot nosed in your face liars and failures from the Ivy League of moss covered edifices that have replaced European values our founders and ancestors died to escape from!

Whatever Governor Palin decides to do, I support her. She is a true Patriot who loves the Republic. I trust her to make the right decision, in making the most impact as we strive to bring restoration to our badly damaged country. Gov Palin is first and foremost a woman of God and I know she is seeking His guidance in which path she is to take.

BTW, Gov Palin is simply brilliant in the political ring. Her CPAC speech was an example of her expertise in taking the GOPe and other progressives apart. She is a national treasure.

Lenny Bruce was a drug addict and anti-establishment comedian, for which Sarah Palin is nothing of the sort. Her speech at CPAC may have been full of one liners, which was meant to be that way.. but she also meant to enlighten and inform, not just entertain.. She never tried to make herself into something she’s not, something other than what she is, an unapologetic American Patriot of Constitutional Conservative with common sense, who refuses to put with liberal non-sense from either political party aparatus machinery.

Lenny Bruce was a drug addict and anti-establishment comedian, for which Sarah Palin is nothing of the sort. Her speech at CPAC may have been full of one liners, which was meant to be that way.. but she also meant to enlighten and inform, not just entertain.. She never tried to make herself into something she’s not, something other than what she is, an unapologetic American Patriot of Constitutional Conservatism with common sense, who refuses to put up with liberal non-sense from either political party aparatus machinery.