From James in Seabrook, TX:

This Car is Driven by The ECONOMY

Thanks for your efforts and great blog! 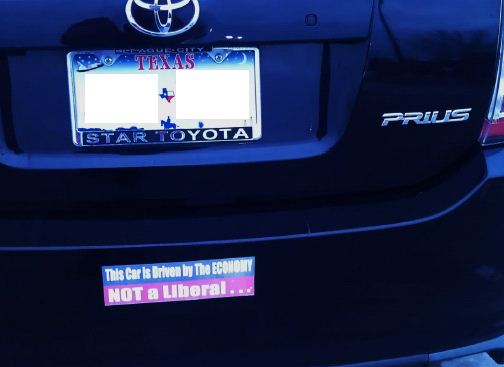 You’d never see such a sign on a Prius in austin… Not ever!

at %5/gal or thereabouts, it would actually make sense to drive a Prius in California.

Too bad it’s bad for the environment: I mean, how do you dispoose of those waste batteries once they’re spent?

Oh, you mean 50 mpg is ok with liberals, even if they’ll eventually poison the environmnet? Say it ain’t so, Joe! SAY IT AIN’T SO!

At least this one admits it’s about the economic value a Prius bestows (even minus the tax incentive to buy one, if that still exists in some states.

A Prius owner I know brags that should his ownership outlast the life of the battery pack, Toyota will pay him to sell them back. I assume that means he will only see the ‘rebate’ if he buys the new pack to replace it. And I can only imagine how much tax money is involved in the company’s ability to pay him (rebates, credits, etc., to Toyota).

NOTE: The buy back implies recycling (I wasn’t clear on that). So Prius owners, or any hybrid owner, can claim ‘sustainability’, as the active materials are recycled….well, at least they are able to be recycled…..

at %5/gal or thereabouts, it would actually make sense to drive a Prius in California

You forget that a lot of that $40,000 is written off as energy rebate on a lot of tax forms. Yes, we as taxpayers are subsidizing it, but the individual is getting a “Deal”.

Sad, but true. Suckers, aren’t we?

Gasbuddy reports that regular gas in Seabrook, Tx. is $3.47/gal this a.m. So the savings compared to a 10mpg clunker is even less. Not that you can even buy a decent clunker now for a reasonable amount of money. Cash For Clunkers made used cars very, very expensive. And it really only hurt those low income people who do not have the credit to purchase a new car and cannot really afford one.

But then, we have a POTUS that doesn’t understand that for every action, there is an opposite reaction.

So, at $3k savings per year, you like the 20/3 payback do you? For the record, I own a hybrid, but I didn’t buy it expecting a return on the increased costs. I bought because it brings out my inner nerd and I enjoy the entertainment I can get when I want it, trying to maximize use of batteries. The ability to forego metal on metal heating (braking) to charge a battery is nerd nirvana for me, too.

I’ve never seen a financial analysis where a hybrid pays for itself vs. a similar non-hybrid over the life of the car without a subsidy or without assuming gas costs $5+.