They can sit in the dark for Earth Hour, we’ll spend the hour celebrating the modern world, starting 8:30 p.m. local time everywhere

I will admit straight-up, I am a handmaid of Big Pharma.

Therefore, I am inviting all my free-market-loving friends to join me at 8:30 pm local time to celebrate Human Achievement Hour.

This counters the self-righteous “Earth Hour” occurring at the same time, during which people are forced to revert to Stone Age lighting conditions to supposedly save the planet in some way. 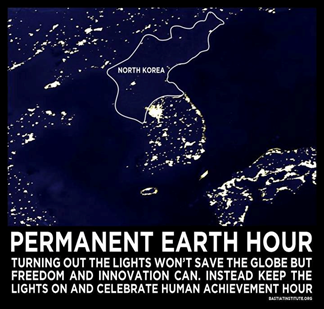 Instead, you can join CEI and the thousands of people around the world who will be celebrating Human Achievement Hour (HAH). Leave your lights on to express your appreciation for the inventions and innovations that make today the best time to be alive and the recognition that future solutions require individual freedom not government coercion.

Today, I would like to feature my pick for Best Human Achievement: Antibiotics.

At College Insurrection, we are featuring a story on our 30th President, “Silent Cal” Coolidge. This remarkable man, known as the “Great Restrainer”, used the pocket veto a historic number of times to avoid passing bad legislation.

What is not known widely is the reason for some of his silence: his son died of a massive infection that originated from a blister.

In June 1924, Calvin Coolidge was overwhelmingly nominated for president by the Republican Party, the greatest political triumph of his life. Within days, however, his world would crumble. On June 30, Coolidge’s two sons, eighteen-year-old John and sixteen-year-old Calvin Jr., played tennis on the south grounds of the White House. Young Calvin had worn sneakers but no socks. A blister developed on one of his toes but he ignored it. When he fell ill on July 2, White House physician Joel Boone discovered red streaks running up the boy’s leg. Laboratory tests soon showed that Calvin Jr. was suffering from pathogenic blood poisoning. In less than a week, the boy was dead.

His sorrow was profound, and some attribute his noted restraint for deep grief.

Four years later, Alexander Fleming was sorting through a number of glass plates that been coated with staphyloccus bacteria, discovering that a mold on one of the samples had killed the bacteria. Penicillin was discovered.

In the 1930’s, sulfa drugs were added to the arsenal against bacterial infections. Click HERE for an excellent video detailing their discovery.

As a biochemist and biological safety expert, I am troubled by the progressive derision of pharmaceutical research and development. Between the equipment, experiments, highly trained personnel, and regulatory hoops, it costs $1.3 billion to bring a new drug to market.

And new drugs are desperately needed. The number of cases of untreatable, antibiotic-resistant infections from a rare but life-threatening “superbug” are on the rise in U.S. hospitals.

The bacteria, Carbapenem-Resistant Enterobacteriaceae (CRE), kills almost 50 percent of patients who become infected. These pathogens are then spread among patients on the hands of health care workers.

The risk of contracting drug-resistant tuberculosis (TB) is increasing along the US/Mexico border. As a San Diego resident, I noted with alarm that in San Diego, the overall TB rate is around twice our national average and that Los Angeles has its worst TB outbreak in a decade.

So, please join me in celebrating great human achievements tonight.

There is a Facebook page for the event, too. And,  please leave a comment  on your choice for #1 Human Achievement!

My wife and I are going to take my 20yr old Dodge out for a spin about that time. Al and Peggy would be proud, except that the wife’s car is a gas saving minivan. But with the kids being home tonight, all the lights are already on and the microwave never seems to stop.

Something about releasing energy & fire.. and maybe my grandparents’ mineral rights in west Texas

Earth Hour: A Dissent
Ross McKitrick: “Abundant, cheap electricity has been the greatest source of human liberation in the 20th century.”
http://wattsupwiththat.com/2011/03/17/earth-hour-a-dissent/

I vote for the printing press. It gave rise to the Reformation, the Industrial Revolution, and the American Revolution.

I vote for beer (only kidding). But I will certainly light up my dwelling when the hour of the jerks draws nigh.

You are not wrong. The accidental discovery of fermentation & it’s ‘ inebriative effects led to the development of European agriculture circa 9,OOO bc.

Right up to modern water sanitation beer was the thing to drink. If you drank water I cities you died.

Wow. There sure are a lot of #1 human achievements. All of which build upon each other! (Go figure 🙂 )

Obamacare is an achievement destined for the dung heap of social planning theories.

As y’all can see, we’re half way through the Hour of Self-Imposed Feelgood Darkness here in the Central Time Zone, and I’m running the computer.

My Leftist college professor sibling apparently isn’t buying into this bullsh*t, as she’s at some folk music fest for aging hippies, enviro-nuts and other members of the elite classes. Or, maybe tonight’s Left-Fest is all acoustic, and they’re sitting in the dark drinking warm beer and smelling each others’ body odor in an unairconditioned venue. If so, more power… no, make that less power to ’em. 😆

All lights will go on at 8:30 here in our California home, which is without a smart meter.

My lights will be on, as well. ‘Course, my kid is at the ROTC ball….

Activism through symbolism. It’s the only way an activist in the 21st century can feel good and preserve their decadent lifestyle.

My front door lights are on every night from dusk to dawn, often for at least an hour after dawn. Those two lights illuminate our National Colors and my neighbors POW-MIA Flag. Also, tonight I’m turning out my patio light to illuminate all the snow banks so the little Bunnies can see their way towards the bird feeder droppings.

OBTW: In less than one month, the Greenies will be celebrating V. I. Lenin’s birthday and demanding that we honor his rotten memory. Instead, we should then honor all those poor souls killed by Lenin and his followers over the many years since.

“And the light shineth in darkness; and the darkness comprehended it not.”

Yeah, I went there. Even Ayn Rand got that much of it right.

We spent human achievement hour at a restaurant owned by Jay Lovell, son of Gemini and Appolo astronaut Jim Lovell. We dined in well-lit rooms tastefully decorated with memorabilia of the US space program. While there, we saw a friend for whose ancestor the Chisholm trail was named. Human achievement indeed.

I’ll go with fire, written language, the printing press, electricity, the physical sciences… etc. But I’m not so keen on other things, such as corporations with personhood or plastics that are leaching toxins unnecessarily into the environment and everyone’s bodies. Or the overuse of psychopharmaceuticals and antibiotics that have created deadly superbugs. (This ain’t your father’s penicillin.)

You’re falling for the progs malarkey when you fixiate on “personages for corporations”. The only reason that was done a century or so ago is common law insisted contractual agreements could only be entered into by “persons”. If the teeny-tiny minds that spread that silly complaint had had their way years ago we never would have had a railroad span the continent. But maybe that would be good?

“centuries” not ‘a century’

Nonsense. General partnerships can enter into contracts and they are not persons under the law.

It revealed to us, beyond any doubt, that the Earth is not the “center of the Universe”. It opened our curiosity for all things related to the Universe – far and wide. The telescope brought to us more discoveries in Astronomy, Mathematics, Physics, etc. It also revealed to us what some people are willing to do for the truth never to be revealed or considered, let alone accepted.

(I’m just watching “The Men Who Built America”, on the part when Thomas Edison showed the incandescent light bulb to JP Morgan. Morgan’s father thought it was but something worth of “carnivals and fairs”. Boy, how wrong that old man was!)

If you’d had an infection that wouldn’t shake off on your own but with a dose of penicillin or Zithromax, or if you’ve been exposed to serious infections but treated successfully with them, I don’t have to explain it to you.

Would you prefer to spend a king’s fortune on a Latin Bible written by monks in some faraway monastery, or just a few bucks on one that is distributed worldwide, in just about every language known to man? Gutenberg made that possible – and the Reformation, and the American Revolution, and…

“God made Men. Sam Colt made them equal.” No interpretation necessary.

Still, today’s gun control debate shows some people don’t “get it”. But thieves given a quick, one-way ticket to meet their Maker by someone stopping them cold and dead or jailed tyrants definitely do.

Lots of diseases and infections that were common decades ago are now a nasty memory thanks to Dr. Edward Jenner’s invention of the smallpox vaccine. Thank the cows, too: the vaccine itself and the word itself comes from the Latin word for cows – vacca. Moo!

Long before the iPhone, the iPad, the Android phones and the Samsung Galaxy, Alexander Graham Bell invented something amazing. Heck, even those losers who clutch to their Obamaphones have to thank a DWM (dead white male) for this one. Even your chatting teenage daughter can thank Bell for this one!

#9 Human achievement: the motion picture and the television.

And face it: you still watch the tube, even though most of the stuff shown is total trash

You owe that iPad, that laptop, and that desktop computer to the people who brought the main tool of modern life… well, to life. And to Steve Jobs for making it a “personal” thing.

Well, there are more. You can add more to the list.

The comeback of the whales.

In 2012 it was announced that Britain’s waterways & rivers were the cleanest they had ever been since before the Industrial Revolution.

Without electricity you could not print food stamps or lottery tickets or the Red Tape Tower. And, somebody should tell the environmentalists that they will have to go to the river to wash their cloth diapers.

Now it seems to me that if the planet is saved for future humans the humans will not be able enjoy the “green” earth because of the massive indebtedness and the ever-increasing oppressive regulations – the “look but don’t touch” museum treatment of the earth. To make ends meet humans will be forced to work through the night by candlelight.

Leslie Eastman squawked, “I will admit straight-up, I am a handmaid of Big Pharma.”

Well, I for one will not deny the medical advanced made in the past fifty years but… I think that “big pharma” should join the cigarette industry in being banned from TV and while we’re at it, add to this ban lawyers and doctors.

We as a society are sorely addicted to legal drugs because of the current policy of an unlimited free-for-all.

As far as advances in life in general, my choice is pre-sliced bread…

These libtards won’t be happy until we’re all back to chunkin’ spears, wearing loincloths and living as serfs on their lands. [sigh]