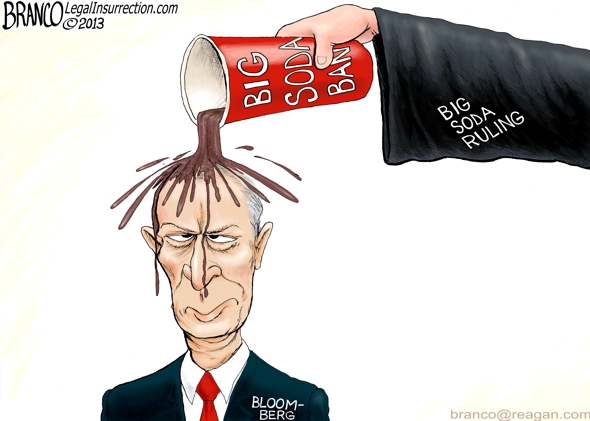 These cartoon are a good lift for bad times.

I see a bright future for Mr. Branco unless he really upsets the gods…

Ordered a “Bloomberg” today at my local fast food restaurant.

Alinsky #5: “Ridicule is man’s most potent weapon. It is almost impossible to counteract ridicule. Also it infuriates the opposition, which then reacts to your advantage.”

But the “elites” like him:
New York Mayor Michael Bloomberg to Address Graduates
New York City Mayor Michael Bloomberg will be Stanford’s 122nd Commencement speaker. Mayor since 2002, Bloomberg previously founded Bloomberg LP, the information technology company, and has directed billions of dollars of his own money to philanthropy. “Businessman, entrepreneur, mayor, philanthropist–few people have demonstrated his vision and the breadth of his accomplishments,” University President John Hennessy said.

They forgot to mention ‘Soda Jerk.’

Love the expression on Bloomberg, Branco! Much better than the Portrait done in the Supermarket 😉

Bloomie is gonna do what Obama does: ignore the law and continue full steam ahead.

I’m sure Big Soda in the Big Apple will have a sin tax added to it in the future.

These type of laws reveal prejudice against certain groups of people, in this case large people. These “legalized prejudice” laws are not unlike the affirmative action laws, the minimum wage laws and the gun control laws – laws limiting liberty by the whims of here-today-gone-tomorrow politicians.