And you say Ashley Judd doesn’t have a chance

And you say Ashley Judd doesn’t have a chance

From Linda in Tennessee on her road trip to Cincinnati:

I snapped these with a long lens while riding shotgun March 11.

I-71 North between Louisville and Cincinnati. 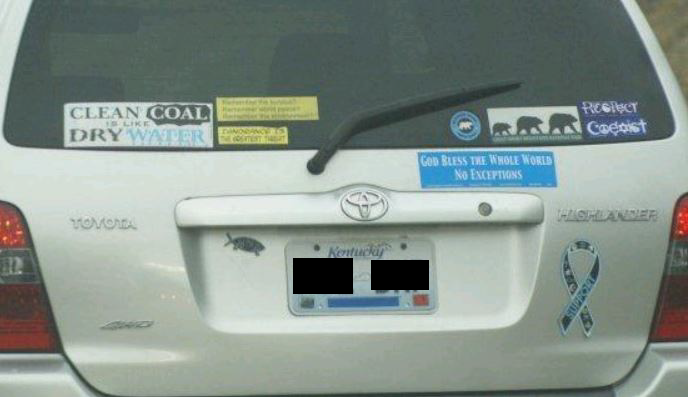 I want these folks to live someplace where they are not forced to enjoy the benefits of coal. Wherever they go, I want it to be winter for 14 of the 12 months of the year. Antarctica is too warm. I wish them no natural hot springs, no coal, no oil, no nuclear power. And I hope they enjoy their winters playing with the Samsung Galaxies.

I sure wish the thumbs up/down were still available because your comment deserves about 20 thumbs up. Thanks.

Take away all the trees too. Don’t want him chopping them down to build a home or cook/heat by fire. If he’s going to be Green, he should walk the walk.

Make them live up to their creeds, indeed!

If Ashley Judd runs she will be treated as a serious top-tier candidate by the media which will include lots of favorable free coverage. She will also use her celebrity status to raise money.

Never forget – half of the voters are below average in intelligence.

I expect the Dems would leverage her gender and squeeze all they can get out it, starting with the War On Women thing. And I would expect every ad against her and any bit of aggression, say in a debate, to be somehow woven into that same theme, attacking her genteel daintiness….or something like that….

Already I’ve seen progressive journalists….I mean modern journalists writing about all the angles of the questioning of Hillary Clinton on Benghazi had sexist undertones, overtones, and multi-tones (joke). Just take a conservative, a liberal female candidate or bureaucrat and insert sexism, reference extremism and racism randomly, and you have the Democrat strategy in every new election it seems.

Not enough to elect Judd, however.

The larger cities of KY are heavily Democrat, and also home to the large universities (BIRM.) The decline of heavy manufacturing along the Ohio river means that coal is not nearly as valued anyplace other than the region where they actually mine it (ie. southeastern KY.)

And even in the region King Coal ain’t what he used to be. Between the uber cheap natural gas from fraking, and declining demand due to emissions plant restrictions/shut downs the coal driven economy is in rapid decline and entering a long term down cycle. About the only thing keeping the lights on is some demand for the high quality metallic coal still found in the region.

Even her in Appalachia ragging on coal is becoming an easy, any generally painless way to self identify and demonstrate your purported moral superiority. At least until the combination of the shrinking tax base and plummeting school rolls cost the little watermelons their cush public sector jobs…