Greetings from Fort Worth, Texas.

I was at the local Walmart tonight and thought I’d check out their ammo section to see what kind of selection they carry. I was so shocked at how picked over it was. There were 2 signs on the glass (just barely visible in the picture) that said, in essence, customers are limited to 3 ammo boxes per day.

The fact that the country is stockpiling ammo isn’t new, but seeing it first-hand was still amazing.

I know when you ask for pictures you have spectacular results. Consider asking people to submit pictures of their Walmart ammo section.

No need for readers to send more Walmart ammo photos, but if you saw other stores, that might work. 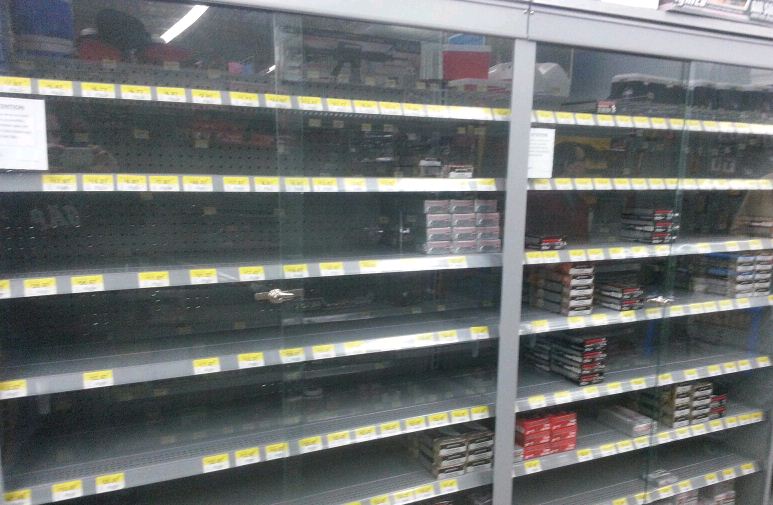 Same image, in this part of East Tennessee Wally World.

And trust me, there is A significant difference in the Three Stars of the TN. State Flag, representing East, Middle and West (one could insert *LEFT for West TN.)

*for the most part the other two would be tickled if Left TN..DID!

That picture could have been taken at Bass Pro Shops in South Florida. Empty shelves there too.

The professors may be teaching their students that we are “post-Constitution” but a sizeable number of the American people still believe that sovereignty resides in them.

Wait until they discover that the mental health first-aid being launched on preschoolers and elementary kids in the name of Newtown is the same social and emotional change the mindsets to collective values and beliefs that has been around since the Berlin Wall came down. We won the Cold War so we must be the ones to change our fundamental beliefs.

That picture says not so fast.

The Walmart I & Mrs. CiLH visited yesterday was low on Peanut Butter! !! The store was messy and the associates were running around like chickens sans heads.

Maybe the “problem” is with Walmart?

“Maybe the “problem” is with Walmart?”

Very VERY possible. Their reports indicate THEY are down business wise.

In fact it was termed:
The stock of Wal-Mart Stores (WMT) dropped like a rock Friday after Bloomberg quoted an internal memo that called February sales at the world’s biggest retailer “a total disaster.”
http://www.usatoday.com/story/money/business/2013/02/15/wal-mart-stock-drop-2-15/1923543/

That report could mean..’Gee gosh, why re-stock? It won’t sell’.

Peanut butter is a staple of preppers. So is ammo.

The problem isn’t in Walmart, it’s in the White House.

I was at the Cabela’s in Pennsylvania last week. Their ammo shelves were even emptier than your picture.

At one time an employee came through with a cart of ammunition. He never stocked the shelves; it was gone before he got their.

The only guns I covet (for self-home defense only) are the
Magpul FMG9 (with flashlight)
Targus Judge which uses big shells and bullets with superior stopping power.

In this case, both/and would be better than either/or.

Either would be much more helpful as deterrents than mace, wasp spray or stun guns or calling 911 in case of home invaders or auto hijackers.

There have been plenty of stories about various federal agencies buying ammo in enormous quantities. The Feds are driving the shortage. Were I conspiracy-minded I would fear the government, but I trust them completely. DHS will keep me safe; so will the TSA. Yeah, that’s the ticket….

The nice thing about Capitolism is that sources will be replaced.

1) Mexico will be shipping truckloads

2) Govt will be too saterated & free up ammo to purchase

3) Manufactors will be forced to stop sales to govorment

Yes, DHS will keep you safe… Just as long as you don’t mind an extended stay at Camp FEMA! LOL!

It’s the same at my Wally World, too. And ammo on Long Island is not as big a thing as it is in “Free States”.

I get mine from Cabela’s via UPS. They usually have plenty.

Our Walmart is always out of the more popular ammo now. That started the day after the NY SAFE Act was signed. It used to be that the shelves were always full – I know this because I would always find my husband there.

I went to a shooting range in south Fort Worth to purchase bullets because Academy and Walmart didn’t have any. OnTarget’s inventory was so low that they only allowed me to buy two boxes. Later someone suggested I order online from AmmunitionToGo.com. It took about three weeks, but I finally received substantially more rounds. However, I still don’t have the gun to go with the ammo because the order I placed over six weeks ago still has not been filled due to a waiting list. They can’t make the guns fast enough.

With respect to the ammo, it’s natural to wonder if the supply is low because DHS has bought nearly 2 billion rounds. I’m glad to learn that some manufacturers are starting to turn down those orders, but not nearly enough yet.

Eventually the ammo horders will max out their inventory capacity. Those buying on speculation are gambling short term.

Calm folks know where and how to buy the ammo they seek.

As with the gas crisis of the 1970s, it payed to have friends who own gas stations.

I agree. I think the boom/bust cycle for certain high-capacity mags on GunBroker is another example of speculation gone awry.

Down here in the Triangle area, it is pretty much the same. Only the most exotic calibers or match loads at the most outrageous prices are left on the shelves. It’s hit or miss at the smaller firearms stores. If they get stock, they sell it immediately. Thursday morning right at 9:00am, there is a line in front of Gander Mountain in Cary. By 9:05am all the .22LR is gone if any shows up. By 10am, all the .223/.308 is gone. Heck – a few weeks ago .223 tracer ammunition showed up and 820rds of that stuff at ~$500 per canister sold in less than a week. (Most ranges won’t let you shoot it due to the risk of brush fires)

As for Dicks Sporting Goods, I won’t do business with them any more after their shabby treatment of Troy Defense and their general cravenness in the face of second amendment threats post-Newtown. The artificial distinction between hunting uses for firearms vs self-defense was used against firearms owners to devastating effect in Canada. It has to be fought tooth and nail here, the moment it is tried. So I can’t speak for ammo availability there. Background here: (http://militarytimes.com/blogs/gearscout/2012/12/27/troy-issues-statement-on-dicks-sporting-goods/ )

My experience has been that the supply (while spotty) is still available at “normal” prices if you are patient. I have however, set a new policy that I maintain at least a 1000rd minimum quantity on hand for the calibers I shoot. I got caught flat footed by the current buying panic. That won’t happen again.

The ammo shortage is real, but not as bad as the First Obama Ammo Depression.

You’re correct regarding tracer rounds. Not a good idea to use those at indoor ranges either…

…and where ammo is available, the price has skyrocketed!

Reload your own for practice, keep the factory made for defense. It’s less expensive in the long run.

In 8 years, I’ve never seen lower ammunition stock at our local Wal Mart. Their gun case is pretty full, including an AR-15 but not much on the shelves other than shotgun shells.

Professor, how often do you buy ammunition? With minor exceptions, and the rare reloading session [components are as rare as ammo] I have to go out of town to find ammunition in the calibers most people shoot. Since November, it has been that way. That Walmart picture is better stocked than my Walmart has been for months. And I know the guy who runs the Sporting goods section.

As far as all Walmart shelves being empty, they are holding up restocking shipments until they can be sure the trucks are packed completely full to save fuel [you know, that thing that does not count towards government inflation figures] and we are dealing with inventory season, which draws down shelf stocks.

Firearms stocks, especially those referenced in US -v-Miller, are down too, but I expect that to change soon:

I tend to agree with this quote from a couple of months ago:

Every weapon of military utility designed within the past 100+ years was gone. This isn’t a society stocking up on certain guns because they fear they may be banned. This is a society preparing for war.

I read many comments on blogs when people get mega annoyed by sumthin..

“this is a Society preparing for war ” etc etc

You have to be careful threatening / promising such stuff.

So far it is not happening . The nation collapses over a mere 26 dead before lunch .if this does eventuate you will need to kill millions if not a hundred million to be really certain of victory.

You have a choice to be realistic or look stupid.

I was in Dick’s the day after Newtown looking at the AR15’s because I knew it was now or never. The next day Dick took them off the shelf. I imagine Dick will lose a lot of gun and ammo business. Sorry employees, you work for a limp-wrist, better start looking for other avenues.

Meanwhile, up here in Ketchikan, Alaska, we have plenty of ammo. Not everything is in stock, but we are not hurting, either. Plenty of rifles and hand guns. Some models are out, but that’s it.

Then again, this place is just packed with guns and ammo to start with.

I can verify that is what the shelves looked like at Bass Pro in when I was in San Antonio 3 weeks ago – I wasn’t there shopping for ammo but I did make a walk through. Ditto on reloading supplies.

Nagels had a slightly better stock, but they were selling it as fast as they could open the boxes.

Trainer Hale did a great job on hooking me up with reloading supplies, especially powder – but it was going fast.

Where I live locally, you buy what you can find and get on every waiting list in town.

And don’t shop at Dick’s – they don’t deserve the business.

I just finished a 7 week road trip down the eastern seaboard and across the gulf coast then back up thru the midwest.

Saw empty shelves in walmarts, gun stores, hardware stores and any other place we stopped in that sold guns or ammo.

Would be scary if not for being stocked up already, just out of habit.