As Obama signed 23 executive orders to “control gun violence” that impact citizen rights under the Second Amendment, supporters of gun ownership held hundreds of rallies across the country this Saturday (Feb. 23) to protest these rules.

The theme for many was “Day of Resistance“; however, in San Diego, it was entitled “Shall Not Be Infringed” and was spearheaded by citizen activist Roger Cotton. SoCal Tax Revolt Coalition contributor Charles Fettinger indicates that over 400 people attended the area’s event and has this report, which differs in an important aspect to the local media  coverage:

Hundreds of patriotic Americans stood together to say “NO” to anti-civil rights forces in government and on the progressive left. A local news outlet, UTSanDiego.com reported the rally incorrectly:

This statement is incorrect because there were many young, able-bodied military and ex-military at the rally. As I traveled the crowd, handing out invitations to visit The San Diego Local Order of Bloggers, I spoke with maybe a hundred people. Around 40% of the crowd consisted of young able bodied patriots. One of which informed me that he “had our back” and many more who echoed the sentiment of the rally.

Meanwhile, the mainstream media has not focused on the outpouring of support for American values and its Constitution. Nor is it covering the fact that the Obama Administration arranged to bus people in to a counter-demonstration in New York.

Nevertheless, news of the nationwide success of demonstration is being spread by social media. Twitchy has a compilation of reports and images that show hundreds of people per rally at events across the country, and many people braved inclement conditions to be there.

Almost 200 people showed up to hear the speakers, and to enjoy the breezy weather and the gorgeous view of the Chugach Mountains in the background of Wasilla Lake. It was about 23̊F with a 20 mph east wind off the lake.

I wanted to share my favorite image of the day, which appealed to my scientific bent: 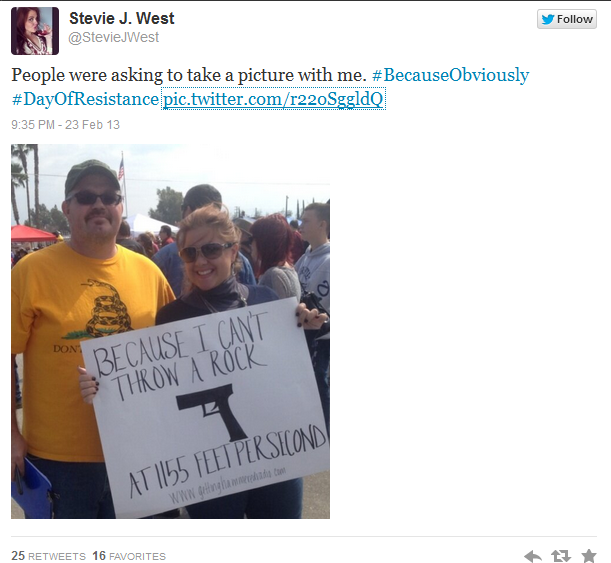 In regards to the way elite media will continue to portray conservative citizen events such as these Second Amendment support demonstrations, Fettinger described an encounter with a local reporter:

Local reporter Bridget Naso of KUSI searched the crowd for television interviews. Her trained eye, focused upon scheduled speakers and older, radically dressed attendees. Since I have had the pleasure of talking with this reporter in the past, I reintroduced myself. The last time we met was on a long trolley ride to Comic-Con. She mentioned with surprise that, “this is a very different setting” to see me. I am a tall, young looking, well spoken, “normal” American. It was clear that I was not who she had been trained to find.

Additionally, elite media and political types will continue with the “Tea Party is Dead” meme — citing the lack of coverage of these events. When this happens, I hope all independent/conservative gun ownership advocates keep Adam Baldwin’s tweet of a picture taken at a gun control counter-demonstration in mind: 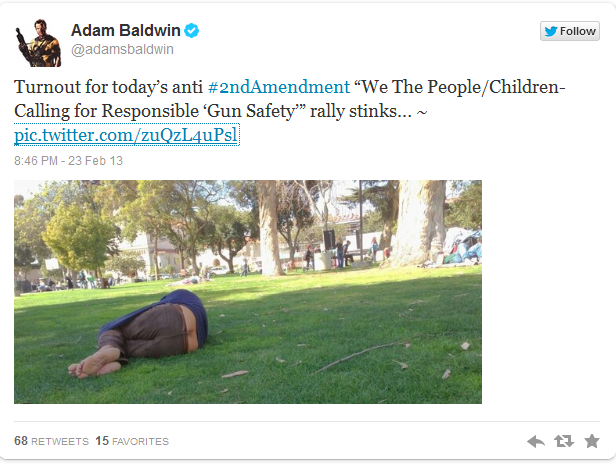 I wish there was a “rally” site for conservative issues, a site where, per state, there was date and time info on any number of rallies opposing the onslaught of stupidty called Progressivism.

Could it be the beginnings of a (second) “American Spring”??

The counter-demonstration by the SEIU et al in New York has been cancelled – this was shaping up to be really REALLY ugly.

And no, I hadn’t heard of any of this til reading here 😉

@gwest, I read that also. However, it seems that one of the links to book a “free” bus ride may still be active. A person over at FR is checking into that.

I will be attending the NY2A pro second amendment rally in Albany this Thursday. It looks to be shaping up to be huge turnout, and I encourage anyone who can possibly get there to attend.

In addition to the rally, which will begin at 11:30ish, those attending are encouraged to lobby their Representative in the hours before the rally begins. There will be tables set up in the LOB (same location-Capitol Building)and volunteers to help get you oriented.

I did an informational post on the rally, which includes images and links with parking information for downtown Albany. Parking will be tight, so if you are going you may want to take the time to check out the maps so that you can make a plan.
http://myveryownpointofview.wordpress.com/2013/02/24/ny-gun-law-results-in-sporting-license-boycott-plus-updates-on-ny2a-day-protect-second-amendment-rally/

I hope to see tens of thousands of you there! 🙂