On the left coast this little cultural tit for tat has been developing for a couple years. First there was So Cal. Meaning Southern California. As in, that’s So Cal.

Then Nor Cal for Northern.

And now we have No Cal with the the state of Arizona. Wily bit of Az pride. 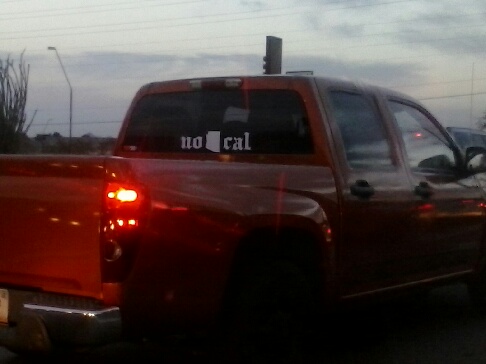 Here in NC we have what is known as a “Halfback”. That’s a New Yorker who moves to Florida and then moves half way back.

Jeffrey H. Anderson writes on The Weekly Standard’s website about a private citizen in California who has struggled to erect a privately funded memorial to honor military veterans. You would think Steve LeBard wanted to open an anthrax laboratory. Politically correct bureaucrats at the California Department of Transportation have impeded his every step.

The latest outrage? CalTrans now demands that LeBard black out E Pluribus Unum from any military seals that would appear on the monument. Also to be redacted: The words “United States.”
———————————–

If you are still in Kuhlifornia…why…???

When liberals leave the failed bankrupt utopias their policies created, they often bring their liberal ideology with them. Nevada used to be reliably conservative, now it’s purple at best. Arizona is far less conservative than it once was. New Hampshire used to be a bastion of sanity in New England, now it’s infested with exiled Bostonians who brought their liberal ideology with them.

There’s a guy who writes about demographics at Forbes named Joel Kotkin. He wrote a fascinating article a few weeks ago showing that the states experiening positive net domestic migration are mostly southern states: Georgia, Texas, Tennessee, Florida, and both Carolinas. The states experiencing the most net reductions in population are, not surprisigly, deep blue California, New Jersey, New York and Illinois.

There is a very real risk that the people migrating to conservative states don’t understand, or worse, don’t care that it is liberal policies that ruined their former states and so they bring their liberal ideology with them and ruin their new home.

Governor Rick Perry better be careful what he wishes for when he urges people to move from CA to TX.

I didn’t have a camera with me yesterday but saw a VW Beetle that had an Obama 2012 sticker on it. There was also a “Listen to the Earth” sticker.

I wanted to stop and put a note on the window reading, “The Earth wanted you to get rid of the idiot! Why didn’t you listen?”