Psychology of an Internet Troll

Psychology of an Internet Troll

Another reader submitted infographic, called Psychology of an Internet Troll.

It’s too large to post in its entirety, but here are a couple of screen shots which explain a lot: 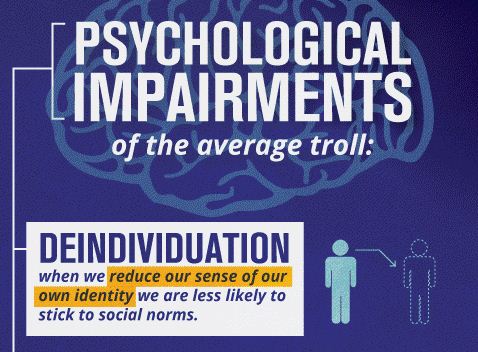 They say not to feed the trolls.  But we knew that.

Thank you for this article! I needed that advice since there are so many ‘trolls’ at a certain site (not blogger) I frequent. Funny thing, it’s almost always women that are so cruel.

Being Breitbart means taking it to them. Use them as foils.

I’ve been “Breitbarting” before Breitbarting was cool, and have been chastised for it.

Rags…How is that accomplished without making their day?? The needy little f***s just sigh and become(I’d wager, IF they have such a thingy)whatcha’call tumescent.

Well, how did Breitbart do it? Did he let them say what they will…ever…without a response? I can’t think of a time.

And, in my experience, IF they get tumescent, they are primed for a cutting.

One practice I recommend is to print their hate-driven stuff off, and use it to educate your friends, family, etc. Also very Breitbarty, seems to me.

‘Fraid you’re responding, commenting, replying to Black Holes of NEED. In other words: Feeding the Trolls. They LIVE for it.

…for which, admittedly, I don’t have a saintly, detached, high minded history. I’m not wired for high tolerance of leftist drivel. B’yotch slappin’ the impudent trolls is sometimes purely irresistible. Or, as a late-longtime close friend used to say:”Neo..You’ve got an oversensitive Gag Reflex for Bullshit. Guilty.

Again, you miss my purpose. And my purpose seems to work.

I use them as foils. I’ve seen blogs where they essentially go unopposed, partly because they can be so aggressive and nasty.

Many people read threads they will never comment on, so letting a trollish line of BS sit without resistance can give them credibility.

When I can get them to cite to a source, very often you can show anyone reading the thread how vacant the talking points used by the moonbattery really are.

It is an education…not infrequently for me, too! Research is good!

Again, this seems pretty Breitbartish to me.

Plus, I think it is FUN… But I am also so warped I practice trial law, so…

I saw this on an “info-thread” on, of all places, 4Chan.org.

It’s amazing that even aberrant behavior has gone hi-tech!

Hugh Hewitt had a terrific blog at Townhall a few years back. And, in those bygone days of yore(’06-’09), Townhall furnished a sharp Administrator, Chris Regal, who dispatched bothersome trolls nicely. Ultimately, with TH’s newer-all tolerant-looser standards, trolls became an infestation as were the pinheaded suckers who HAD TO RESPOND compulsively and Hugh shut down comments and then moved his site. He then, in addition, made a pay site, Hughniverse, which has never seemed to catch-on for commenting. Sad, as he’s one of the Very Best.

Now and then, when morbid curiosity gets to me, I check out Townhall/Tipsheet to see if things have improved. Nope, Nada, Nein, Nyet. The interns still have charge of the posts and the Trolls/Troll Responders have massive, infested control.

I’m still reeling from November 6th and mostly taking a sabbatical from political stuff—piles of Weekly Standards & National Reviews(even Commentary)are yet unread—but, Thank You Professor J. for this fine refuge!!

There needs to be a strong disciplinarian in such endeavors. Strict but fair discussion moderators are a must-have. A basic set of published “house rules” comes in handy too.

1. Except for the most extreme cases, about the only thing that facially can be ruled out as trolling is passive acquiescence with the prevailing opinion.

Online as in everyday life, there is no substitute for prolonged exposure to an individual.

3. Some sites allow registered users to specify other users for screening out. For example, I joined a weather board in order to get a heads-up about potential damage to my property. The regulars like extreme weather and they often exaggerate the prospects for it. I’ve screened out a couple of folks who screamed wolf at every opportunity; one went on to get banned but the second remains a regular.

It’s funny that the definition of “trolling” is highly dependent on the site, the dialogue and the particular “culture” of the regular posters.

I have been banned from the DU and Daily Kos for posting – mainly responses – which are tolerated on most Conservative blogs and sites. The Left is a strident echo-chamber, where nothing is tolerated, except the official party line. On the other hand, at conservative sites, or those that are kind of middle-of-the-road, there seems to be less ad hominem responses to opposite views and more of a desire to convince, using facts, figures and logic.

The reason for this difference, which has been discussed before, is that the Left is more attuned to emotional argument, ideological alignment and dependence on party-line memes (e.g. ‘Bush tax cuts for the wealthy’, ‘Bush destroyed the economy’, ‘gun control lowers crime’, etc.). On the other hand, Conservative dialogue tends to be more fact and logic-based, which we all know is anathema to most on the Left.

Anyway, my real IP has been banned by Kos, DU and some others, so I post regularly using proxy servers. They don’t want divergent opinions, and the mods are all terribly thin-skinned, especially the little fruitcake Marcos. I was most recently banned from DU last Wednesday, and I’m laying low on Kos, having angered the natives in the last 48-hours. I make it a point to be polite, but I will resort to sarcasm when pushed hard, yet I’ll never indulge in ad hominem attacks on anyone but politicians. Yeah, they consider me a troll, but in the classical sense, I’m not by a long shot.

Human behavior is chaotic. It is bounded with intermediate behavior following a probabilistic distribution. This enables us to predict average behavior by the principles adhered to by each individual. There will, of course, be temporal and spatial oriented deviations, but the principles, among other guides (both passive and active), act as a sink to motivate a convergence.

Must disagree; what is called trolling depends heavily on the site.

Places that cannot tell the difference between marrying outside of the group they assign you to and genocide— much less those that engage in “those guys are hateful and violent, let’s call for their murder”– should probably not be taken too seriously when they call disagreement while offering uncontested but disliked facts “trolling.”

I retain my sanity through frequent dissociation from the virtual world.

Many, if not most, people cannot handle the alternate universe, especially over an extended duration.

I am immune to trolls & being called a troll.

I have a genuine troll cap made in the Faroe Islands which wards against all things troll. It is also very warm with lengths of woollen strands on the top that spin around in the wind . These help to prevent one from being blown over a cliff .if you can see them in your vision the wind behind is very strong.

I would post a pic but I do not want to give away my secrets .

‘Fraid, Rags, we’ll agree to disagree on the Troll Feeding Ish-Shoe. I believe that ANY response, challenge, proof demand, etc, etc. maketh their day. IF your eyes are diverted to their loathsome, cluttering, NEEDY way…They sigh and pump the fetid air of their Grammy’s Basements with their smooth little fistums.

But, hey, like trial lawyers I dwell in the murky depths: Television Steaming Piles of Art. (-: