No water, no money, no reason to stay.

I sleep a little better knowing that not everyone in California is a loony leftie. I took the attached photos on Rt. 152 between Fresno and Los Banos in December. This is part of the Central Valley where producing food for our nation is priority #1.

Unfortunately I could not safely drive and snap photos of the sign stating “Obama’s wealth redistribution plan” perched atop a manure spreader or the sign stating ”And we thought Carter was bad”.

Keep up the good fight. 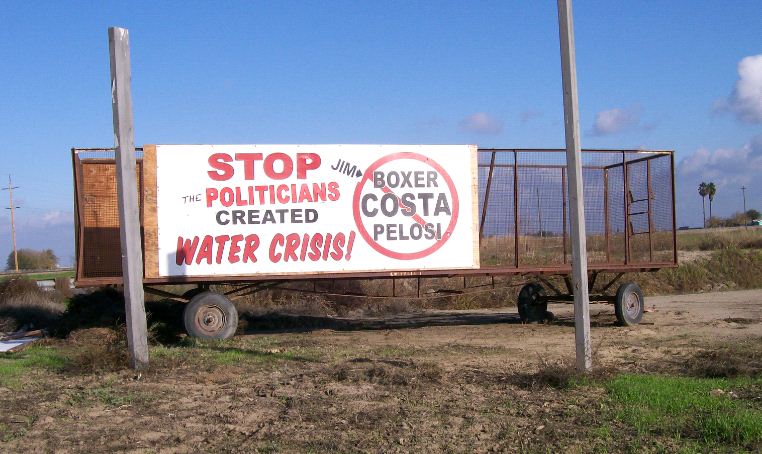 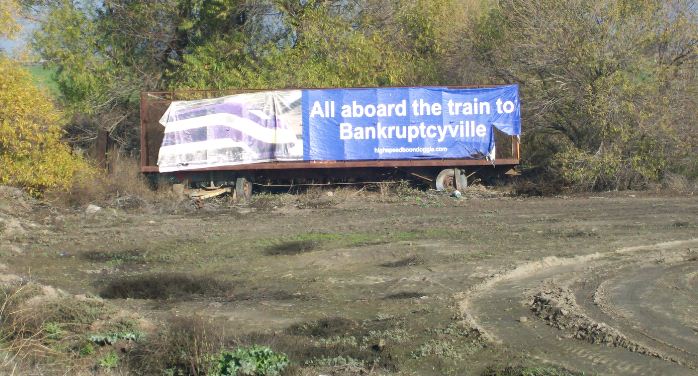 I’m so happy to see someone’s taken photos of these banners – they are ALL OVER the central valley. Among my faves: “Pelosi, Boxer, Reid Manufactured Water Crisis”.

As a native to Cali, I am saddened to see what has become of our once great state. The inmates truly are running the asylum.

Just regarding Ag, we’ve been nearly decimated by the misguided policies from the enviros who will stop at nothing to prevent progress in our state. No irrigating, ranching being regulated out of existence, no drilling, no fracking…

I come from a long line of farmers. California should be abundantly feeding the planet, and could be. Has before.

But like everything else in our country, up is down and right is wrong.

Thanks for your tireless efforts, professor.

Twenty years ago I used to commute through the southern San Joaquin valley around Arvin. It always gave me a secure feeling driving through mile after mile of vineyards, orchards, and row crops. I imagine it’s just a dust bowl down there now.

Close, but not quite. At least in a Dust Bowl you get to see thriving dust.
The Central Valley is acre after acre of dead almond trees, fallow row fields, and farm after farm of weeds.
Next to be hit is the Imperial Valley. They know it’s coming. LA and SD are thirsty!

Yes, we are thirsty down here in SD. However, in 2007 a Federal District Court decision limited the amount of water that can be pumped from the Sacramento Delta to the San Joaquin Valley and farther south. Seems a 5cm bait fish is more important than producing food and keeping people employed.

And speaking of ‘secure feelings’, I’ve always thought of our nation’s food supply as an issue of national security. Hyperbole? Well, I don’t think so.
The devastation (human caused) to this state’s food production would be, in my opinion, sedition or treason.
Yes, we still produce a lot of edible stuff, but our state isn’t the great producer it is capable of being.
Btw… unemployment in the Central Valley is, I believe, among the highest in the nation: ~25%? (probably without even counting the illegal alien migrant farm workers – making it exponentially worse).

The more visibility this gets the better. Thanks for posting it Professor.

One is left to assume that the “California” “loony leftie”, does in fact EAT on occasion.

Certainly looked as though they did by looking at pictures of the recently departed Chris Dorner.

Of course we eat.
But we’re not like you… remember we’re on the coast so we have an unlimited supply of plankton.

I don’t understand this. Joe Conason regularly holds up the brilliant California success as proof that Republicans are stupid for not respecting the climate and investing in the future.

The thing about CA is that half the population lives in three metros, and because they out mass the rest of the state, they basically do what they please.

True. And they’re fond of saying: “Why do you need to kill animals for food? Just get your meat at the Supermarket where it’s made for you.”

I never checked but did the water issue kill the sugar beet productivity?

If I may pipe in one more time…
Sugar beet production does not seem to be down in Imperial. It’s a good one to follow alfalfa, soil nutrition-wise, so it has a utilitarian value (alfalfa is grown ABUNDANTLY in the valley). I don’t know about Central Valley’s sugar beet production.
Also in Imperial, sugar cane production is doing just fine. Thirsty crop!

If the “Beverly Hillbillies” were still running, Jed, Granny, Jethro and the gang would be moving from California back to Texas.

Side note: If CA really wanted to positively impact the environment they would figure out a way to stop that horrid smell from making it’s way to the 5 as it passes by the slaughterhouses?

And yes, those signs sadly pepper the highways all along the central valley. Between SF and LA, it’s our little Fly-Over State.

I see those signs every time I drive up to the Central Valley to visit home. I find them heartening but I imagine 95% of my fellow travelers are shocked and appalled by the racist, toothless, inbred, country bumpkins and their signs.

Just sayin’, I know for a fact that that stretch is full of Constitutional Patriots. And they hold the coastal Lefties in absolute contempt, and worse.

At some point the marijuana crop will be affected and things will change.

I first encountered such signs in 2009 on a trip through the Central Valley. To see the ripped up orchards and unused (and disused) land was truly disheartening. As a matter of fact, things were so bad there that even the Democrats of Visalia were disenchanted with the people they had sent to office.

I spent an afternoon having lunch in and visiting the town of Coalinga. Coalinga was doing its best to put on a brave face, but it was hard. I wound up sitting next to a Harris Ranch feedlot cowboy at the Mexican restaurant where I had lunch. He had been a construction worker up north in Redding, but the recession had taken the wind out of those sails, and he was doing what he could to make ends meet and support his child. (Yes, folks, it is the smell from the Harris Ranch feedlots that knocks your car off I-5.) Believe me, being a feedlot wrangler is just about the least glamorous jobs on the planet.

Subotai Bahadur is right when he says that stretch is full of Constitutional Patriots. One of the sources of their contempt for the coastal lefties is that the folks at the south end of the valley get blamed for their awful winter air quality, despite that the prevailing winds are from the north, sending the Bay Area lefties’ pollution down south, where it collects on the north side of the San Gabriel Mountains.

If you want to make yourself really gloomy, cut across the valley from Hwy 99 to I-5.

Victor Davis Hanson, of Selma, has written eloquently on the troubles there. Check out his essays.