In Ithaca but not of Ithaca

In Ithaca but not of Ithaca

Spotted at the Wal-Mart on Route 13.

Probably lives outside the 10 square miles, in the reality part. 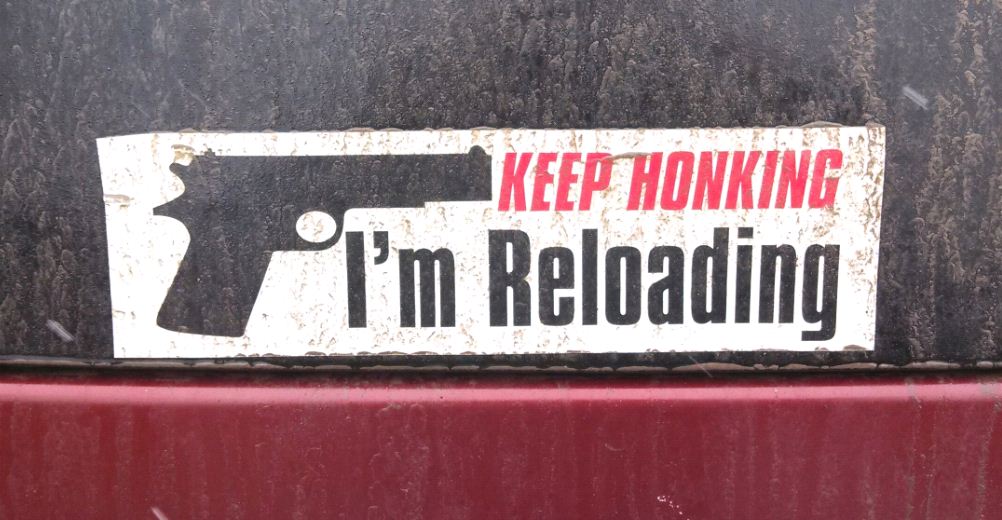 John Boehner:
Mr President, you got Your Tax Increase:

Ah ha, that “bumper sticker” is in violation of the 29th Amendment to the Constitution. Arrest warrants and deportation to South Texas must be in process by now! “Hate Speech” is now against the law in these 49 1/2 states.

The lefties forgot to register their domain name.

That is so funny! Stupid libtards. 🙂

Ithaca is still a name associated with very affordable shotguns, and a Browning 1911 pattern .45, too.

But they are made in Ohio. Which could be a trend for gun makers associated with New York and Connecticut…

It wasn’t very long ago when many munitions were made in and around New England, not to mention more simple guns. There is a long history dating back centuries. The two most well known gun manufacturers, Colt (Hartford, CT) and Smith & Wesson (Springfield, MA) are alive and well and highly profitable. Although I haven’t been following the national debate so much, I have been watching closely the local state legislatures. Many of the Dems love to find a controversial topic (e.g. immigration) and create ‘statement-making’ law. If they do so with firearms – more so than they have to date – it will be interesting to see how S&W and Colt respond. Like Magpul in CO??

Right, and an interesting little vignette in American history. Yankee machinists and mechanics were a force in the Civil War, and later in mass production of firearms generally.

“A Connecticut Yankee…” by Twain was simply a recognition of a culture of ingenuity and craftsmanship in that region, employing a character everyone understood, and you can still see shops and mill built 100+ years ago in operation in towns and villages around from New Jersey up.

The Kentucky long rifle, by comparison, was often made by a single gunsmith, with a few assistants, in very low-tech (for the time) crude shops.

Beretta is warning Maryland that it is portable, too, btw.

Brings back memories of me biking past Ithaca Gun on Gunshop Hill back in the 70’s … can’t believe I could pedal up that hill all the way from the gorge.

Good thing it was a Wal-Mart parking lot; were it a school parking lot the driver would have been suspended for having a picture of a gun.

If he has to reload, he needs better “GUN CONTROL”.

OT: My husband and I were in a gun shop yesterday (visited the range too) and a gentleman was talking about veterans receiving letters telling them that due to their PTSD they are no longer capable of taking care of their own financial affairs and can no longer own firearms. Not to worry, because the government is not coming after your guns. Camel’s nose and edge of tent comes to mind.

You can read about it here: http://redflagnews.com/headlines/disarming-americas-heros-veterans-receiving-official-letters-prohibiting-them-from-purchasing-possessing-receiving-or-transporting-a-firearm-or-ammunition

An honest question is , if a Vet is receiving disability payments from us due to a PTSD diagnosis do we want that person to have a gun?
A person who has been trained somewhat in weaponry and as most likely was in combat where he was shot and was shot at and NOW that damaged him to the degree he has been diagnosed as having a mental issue PTSD
do we really think he should have a gun?

My Husband is a combat Vet. He feels you can’t have it both ways. If you have a problem resulting in a PTSD diagnosis then you do not need to be going around with a gun.

I feel a little sorry for that driver should he/she drive that vehicle onto campus. If the Arts profs or students don’t get ’em, the bizarro Cornell coppers probably would.

Which Walmart on NY-13? The one that was approved under the noses of the Ithaca city government or the one where residents of Ithaca traveled north 20 miles to tell people in a different county that they shouldn’t have a Walmart because Ithaca residents didn’t want them to have one?

BTW, we the residents of Cortland county wish to thank those residents of Tompkins county for your sales tax revenue at the Walmart on NY-13. 😀

If this person is ever forced to actually use his weapon defensively, the plaintiff’s lawyer will have a field day with stuff like this. THAT is why I avoid such stickers even though I chuckle every time I see one. I refuse to give the slimeball’s ambulance chaser ANYTHING to point to in order to claim I intentionally went looking to shoot somebody. Even if I did….=b