I liked it so much

I liked it so much

I decided to make Patricia’s manipulation — contrary to Executive Order — of the Obama skeet shooting shot our header at Facebook.

(In case the feds ask, I’m not ratting out who “Patricia” is, and there’s nothing they can do to make me talk, except maybe offering me an Obamacare waiver.)

Which reminds me, if you are on Facebook and not “liking” our page, why not? 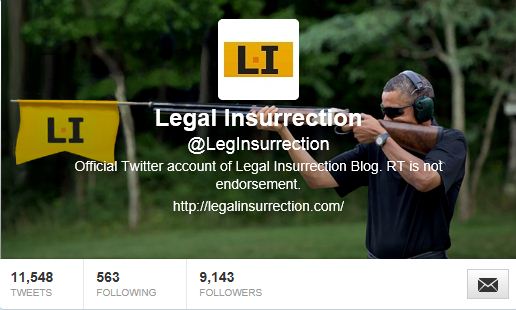 Professor, I don’t use Facebook as it is neither secure nor very private.

I DO, however, read Legal Insurrection every day using my Linux server and desktop.

Yeah, I have an account I formed to keep an eye on the grandkids, and about 35 friends, nearly all of whom are friends of the same other friend, none of whom I’ve ever met in person.

I stopped “liking” stuff when I realized the ONLY way Facebook can ever make a dime is by selling all private information to the highest bidders. All those billions of market capitalization are completely worthless unless they sell our private info.

Think long and hard before you post anything or “like” anything on FB, because anybody who wants to know about you can buy those records, and FB will make it easy for them to analyze your activity.

Facebook is evil. If I want to become a marketing tool for someone else, I will take up bicycling and wear those silly outfits with advertising all over them.

If Facebook was a bicyclist, I would run over it.

Anchovy, the only reason I am on Facebook is for cycling and those not so silly outfits. Become a cyclist, and learn why the clothing makes total sense for that activity, as any other sport specific attire.

I think Obama is shooting at the stationary skeet throwing machine (or it’s operator) and not the skeet itself. I never shot at that altitude on a skeet shooting range. It can’t be a photoshop though. Democrats would never stoop to that, would they?

What, you never heard of the Speckled Low-Flying Skeets of Camp David?

I am impressed that the firearms illiterate liberals actually figured out which end of the shotgun goes next to the shoulder.

They probably got advice from one of the SS agents. They are good about that. Well, that and which whore houses are the best in Colombia.

The only way he ends up shooting that low is that he’s missed the target, and he’s let it go W-A-Y out, almost to the ground.

This is such a sorry piece of BS, it’s an insult to people’s intelligence.

If I recall, a lady Senator or Congresswoman from TN offered to challenge the President to a match. THAT I’d like to see.

This really has been fun — if not cathartic.

Take a look at the Barry Fudd collection from across the web — it’s grown:
http://thefinereport.com/2013/02/this-is-how-stupid-obama-thinks-you-are/

The four trillion dollar photo op. Inflation has its consequences.

I think “Barry Fudd” is going to stick.

Caption: This is the only time Obama is a straight shooter.

This guy is such a tool, he just has to keep up with Putin.

Call me a conspiracy theorist, but I can’t believe that they were so foolish as to say “don’t photoshop” knowing that it would only encourage photoshop.

I think if they were hoping to spread his image far and wide, they think it is a flattering, manly picture of Obama manning a gun. And they want it spread far and wide to reinforce that image.

(And lord knows there are plenty of pictures of him in Mom jeans, etc. that might give one pause).

Therefore, the only rational answer is to photoshop it the way Soopermexican did.

Just my two cents. And its possible I might be over thinking it a wee bit :-).

I still love LI, but Sooper’s is the only image I’ll be forwarding around for now.

“Only the paranoid survive.” – Andy Grove

Don’t underestimate their hubris: they believe their own press.

But we know that press is fantasy.

That picture is so phony. In skeet shooting, the rifle is up and to the right because the skeet is in the air. Look at where odumbo is holding it, too high on the shoulder. Recoil from where he is holding it causes INJURY. And why isn’t he looking through the scope to see the flying skeet?
Aren’t pictures released from the White House to the public considered to be public domain? To do with what LI wills!
Odumbo is faux through and through and apparently thinks
the Americans are too stupid to notice. There is an admendment that should be invoked when the pre’sent is so reality challenged that he foists this phony pic to the public. Outrage!

Anyone looking at this photo who has only watched skeet shooting knows it’s all wrong.

Heck, the stance, the hands, everything about it is all wrong – even for target shooting.

This photo is a metaphor for the Obama administration and its policies are just plain bizarre and surrealistic.

Since 2008, I feel as though I’ve been living in a Salvador Dali painting and Lady Gaga is their version of normal.

Thank goodness that our president cares so much for our mutual welfare that he attempts, by himself, to rid our country of that menace of low flying skeet, upon which much has been waged and so little understood. Without him, we would be lost sheep gazing peacefully in the meadow of life!

Ah, the doctor cometh to prepare my daily dosage. Peace unto him that wages this fight against those horrendous low flying skeets everywhere!

Is help coming or not?

Photographic proof that one should never mix chooming and skeet shooting.

[The photo looks like he’s shooting at a static, non-moving target. Since the target isn’t in frame, they thought they could pass it off as a skeet shoot]

[Or… he’s participating not in a skeet shoot, but a scat shoot, where Secret Services agents roll cow pies across the lawn for him to shoot at. Later they’re going to blow bubbles!]