And probably will sell for a lot, because it’s history.

Bidding is under way for the bloody sock worn by former Red Sox pitcher Curt Schilling in the 2004 World Series, which he put up for sale after the collapse of his Providence-based video game company.

The sports director at Heritage Auctions says the highest bid so far is $32,500. Live bidding is taking place in New York City.

The sock had been on loan to the National Baseball Hall of Fame. It’s expected to fetch at least $100,000.

Schilling’s 38 Studios was lured to Rhode Island from Massachusetts with a $75 million loan guarantee. It later filed for bankruptcy.

Schilling also guaranteed loans for the business. The state also is now likely responsible for some $100 million related to the deal. 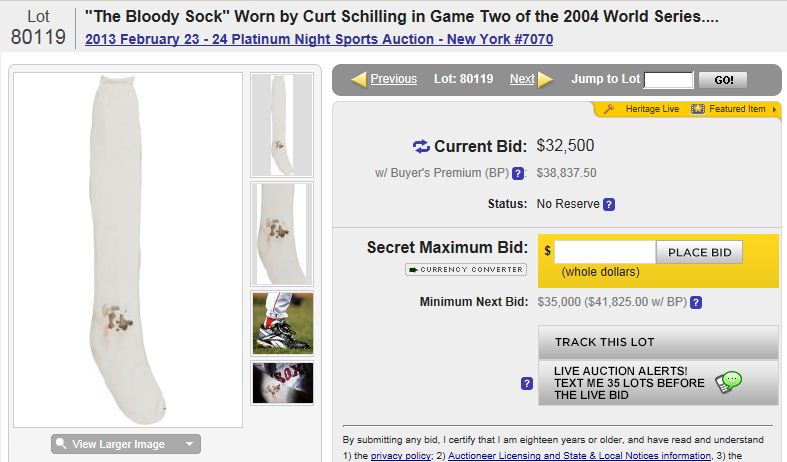 The MLB stike of 1994-95 just about ended my lifelong following of baseball. The bad press, failure to resolve the illegal doping and the fake homerun stats that followed made me lose interest altogether. I reluctantly attended a Detroit Tigers game at the fine Comerica Park facilities amidst the rubble of downtown Detroit city and I concluded that the game is now like watching grass grow.

So you will have to forgive me for not knowing or caring about Curt Shilling’s sock. But the memories of my baseball heroes who played in the ’50s and ’60s somehow will not go away.

That strike did end my interest in MLB. I’m a Detroit native, but haven’t watched an MLB game since. I can name just one current Tiger – Justin Verlander – and I’m not sure how I know that much. I do keep up with the Lions, though it can only be due to the inherent masochism of the lifelong Lions fan.

It’s market reality, not state tax subsidies dummy. It’s what Kurt gets for listening to a trendy lefty financial advisor. He should have gone to Texas, Georgia or another state where he’d get competent advice.

The collapse of Schilling’s 38 studios was more than a failure of managemnent… Governor Linc Chafee who Chaired Economic Development Commission on his 18 month watch never oversaw the largest investment made by the state to a single business… More info “Sorry Governor, When you own the Ranch, you Own the Outhouse Too” … Sorry for the Shameless plug,
http://www.redneckrepublic.org/sorry-governor-you-own-the-ranch-you-own-the-outhouse-too/

Can’t the LI community band together and buy it communaly as an investment to be resold at a hefty profit in the near future?

LukeHandCool (who loved playing sports as a kid, but who won’t spend two minutes watching professional sports … the only joy from being a spectator is watching hid kids play)

Luke, the term ‘investment’ no longer means what you/we think it means.