Actually, the opposite is true.  While some decreases in the growth of government are mandated, and government has less flexibility than usual particularly as to the defense budget, government still controls the pain meter.

The key word in the sequester political debate is “could.”

The data released by the Obama administration, as reprinted in WaPo, detail what “could” happen (emphasis mine):

The state-by-state impacts of sequestration

To pressure congressional Republicans to compromise on a way to prevent the looming $85 billion in automatic spending cuts, the White House on Sunday detailed how the so-called sequester — scheduled to take effect March 1 — could affect programs in every state.

The list of “could” happens is extensive, here’s are just a couple of excerpts from the numerous charts in the WaPo article: 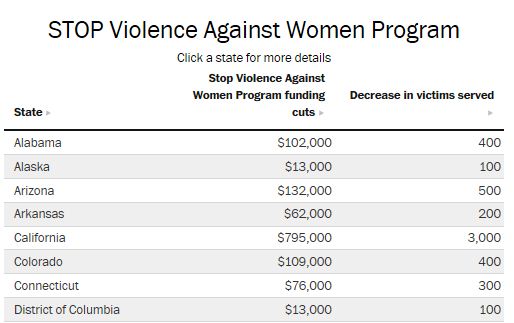 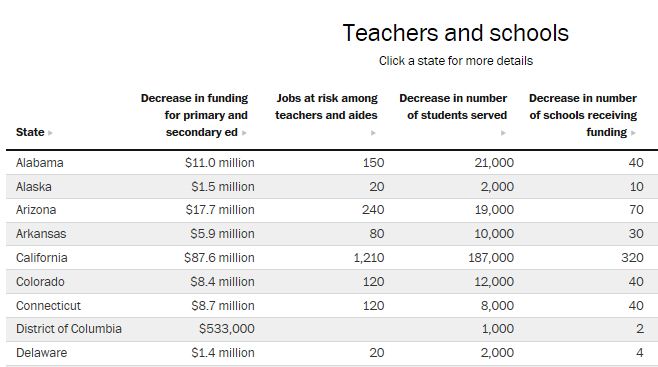 Of course, none of this decrease in services “must” happen.  Are we to believe that the budgets of these various federal, state and local providers are so lean that even a cut of a percent or two from the current budget (which almost certainly is much higher than just a year or two ago) would result in diminished services?

The government, by and large, will decide how much pain you suffer.

And Democrats and supporters of big government are politically invested in you suffering as much as possible from the sequester (h/t Instapundit):

In the long partisan conflict over government spending, the sequester is where the rubber meets the road. Obama is betting Americans will be outraged by the abrupt and substantial cuts to a wide range of government services, from law enforcement to food safety to public schools. And he is hoping they will rise up to demand what he calls a “balanced approach” to deficit reduction that replaces some cuts with higher taxes.

But if voters react with a shrug, congressional Republicans will have won a major victory in their campaign to shrink the size of government. Instead of cancelling the sequester, the GOP will likely push for more.

How much pain will you feel? Wait for it.

No entity is talented on the issue of “Fear” like the progressive/liberal/democrats.

The so called Sequestration, (a direct product of the anointed one), is simply a reduction of the rate of increases to the budget.

With this said, why not pass a “frozen” budget based on last year? Such would preserve all programs while at the same time having a great symbolic gesture that the administration means business regarding the deficit.

But nooooooo, ain’t ever gonna happen! No good publicity comes out of any application of common sense…

Since I trust nothing that comes out of this White House, I would like to know how those reports came to the $$ totals they show.

Cut Head Start? Oh, the horrors. Who’se gonna watch the kids when Oprahs on? Nevermind that even the federal government says Head Start is a miserable failure.

Where are the cuts to Air Farce Won and the Obamas’ endless travel and vacation budgets? Maybe if Prez-O-Bama stayed in town two weekends in a row, (a.) something might actually get done, and (b.) he’d single-handedly wipe out half the deficit.

The most revealing part of this list is the extent of the involvement of the federal government in state and local affairs.

More startling for me is the sheer number of lobbyists for any given program and the dollars involved in their efforts. For every program that could see a reduction in growth, there are a tremendous number of lobbyists who spend money and time promoting the ‘damage’ the reduction will inflict. It’s not really a surprise, but it is still startling every time I become aware.

They’re also punishing the military, announcing defense cuts where it will hurt individuals the most, blaming sequestration.

This is called by some the “Washington Monument Ploy”, after Parks Dept. threats to cut tours of DC monuments.

I first recall it during the Howard Jarvis Kulhifornia tax-cut drives when corrupt thugs in government FIRST cut back on essential services, to show those proles who was in charge and who was to fall into ranks.

It’s been only two weeks since Rep. Charlie Rangel (D-NY) introduced H.R.747 “To amend the Military Selective Service Act to require the registration of women with the Selective Service System” and now, they want to get rid of the draft completely …

WASHINGTON—Two lawmakers are waging a little-noticed campaign to abolish the Selective Service System, the independent federal agency that manages draft registration.
They say the millions of dollars the agency spends each year preparing for the possibility of a military draft is a waste of money.

Reps. Peter DeFazio, D-Ore., and Rep. Mike Coffman, R-Colo., say the Pentagon has no interest in returning to conscription due to the success of the all-volunteer force.

… and it will save money.

Yeah, it’s a “Washington Monument” play, full on. A 2.2% cut in the rate of growth will DEVASTATE, um…something. Maybe.

All you California residents who remember Prop 13, know this game … cut only the stuff that will inconvenience the public the most .. like cleaning the beaches.

OMG! A CRISIS GONE TO WASTE!!!!!! QUICK SOMEBODY FREAKOUT!

Seriously, A cut in the rate of growth, and the folks are on the doom and gloom apocalypse watch. *snore*

I also agree with an earlier poster (Sailor77) who said the relevant issue is the involvement of the Feds in State and Local government purse-strings. The addiciton has to stop, it’s time for a public intervention. Let the Sequester not only go on, but a few more may be in order.

The real fear of the Democrats and the Obama Administration is that the “sequestration” won’t be painful enough.
If there is no pain, then the public just might be willing to cut even more.

Is it me, or is there a note of desperation in the way the administration is handling the sequestration as it comes down to the wire? The fact that some of the willing sycophants – including Drudge’s aptly named Guppy, Ezra Klein – are panicked and trying to change the story line and the history got my attention to begin with.

Oh, and in another theme of the post, A much cheaper “Stop violence against Women” program is a nice .38 or .45 caliber pistol.

I’d like to STOP the stupid against women program: “COULD.”

It will be just as painful as they can possibly make it, with the greatest pain to be inflicted on those who will make the most noise. (But I repeat myself.)

Throughout the federal government, ambitious bureaucrats are spotting a new opportunity for rapid advancement: screw up your department/agency as much as possible and vocally blame it on the sequester.

Extra credit for each “leader” of a designated victim group you get to denounce the sequester. Special bonus for complaints from illegal aliens.

They don’t look like they could carry a coffin even if Chavs wastes away . They could clap & look f*cking stupid.

There could be a world circuit. They would look good next to some Arab prince opening a luxury car expo or ‘M16 swap meet in the desert.

maybe if the fed wasn’t taking so much and spending it the states would have it there when needed.
seems to me CA has an issue with domestic violence…

What next? Are they going to reduce the library hours and close the public swimming pool. Sheesh.

Maybe some of the money that ends up in Big Bird’s pockets could be used to stop violence against women? Or would that be a war on birds?

Good… now maybe the S.O.B.s who live off the Public Largesse will know the “pain” of those poor slobs like us why keep the dollars flowing.

Pain? Wanna see pain, you filthy slugs? Try working for a living or working for someone besides the government or an NGO.

There are very few as painful as watching a corrupt, rogue lunatic in the highest office in our land working feverishly to destroy it.

Just as painful is hearing the highest elected official in the GOP respond to the threat with the likes of the statement below.

As painful as both, is watching the people who hold sway with the GOP do little, if anything, to oust the GOP fools too incompetent, cowardly or corrupt to stand in the way of e that corrupt, rogue lunatic.

Ted Cruz has set the GOP gold standard. Anything less cannot be tolerated. Especially not this kind of tepid insanity, aimed at people unknown:

“This is not time for a road-show president,” House Republican Whip Kevin McCarthy, R-Calif., said.
“If the president was serious, he’d sit down with (Senate Democratic Leader) Harry Reid and begin to address our problems,” Boehner said.
http://www.foxnews.com/politics/2013/02/25/republicans-urge-obama-to-top-campaigning-over-budget-cuts/#ixzz2Lxd8WN8f

Here is my thought: If a Department Head can’t figure out how to absorb the “cut” and not affect those that they serve, then they need to be fired.

Pure and simply stated: If you can’t cut the budget a modest amount then we need to cut you.

How many of us had a “budget cut” when the Social Security deduction returned to normal and found ways to mitigate its affect?

But this isn’t about ‘budget cutting’ at all. It’s just continuing manipulation, toward a very sinister end.

Hot Damn- it’s like Christmas in March! Second only to abortion funding, that money gets siphoned to the biggest bunch of evil crooks on the face of the planet.

In my home county, they spent the VAWA money on a conference where the “safe place” people gave the county judges and prosecutors a bunch of artwork describing every man as a wife beater. They then proceed to hang it up all about the halls of family courts. When the local angry divorced dads groups call BS on it- the lead judge goes on the freaking evening news and states that the art depicts how it really is.

Yeah- so I’m going to weep a big river [NOT] when this money starts drying up.

Fun Fact: Ever want to get out of Jury duty for a DV case? Just ask the judge how much money the local courts, police, and prosecutors get to drum up DV statistics.

Well, our choice is clear. We can raise taxes or we can murder helpless orphans. Thank you, objective media, for bullhorning this to the nation.