Sarah Palin has taken to twitter to further confuse and confound what she has termed the “idiot media,” no doubt including Washington Post journalist Suzi Parker who erroneously reported that the former Governor would be joining Al Jazeera.

The Washington Post’s Suzi Parker had failed to realize that a piece published on the Daily Current, which describes itself as “The global satirical newspaper of record,” was satire.

Parker had been attempting to paint Palin as fame-crazed, using the (false) news of her gig at Al Jazeera as proof.  Twitchy preserved Parker’s now-redacted text:

The Sarah Palin Story is a cautionary tale about what can happen when politics and celebrity meet.

“As you all know, I’m not a big fan of newspapers, journalists, news anchors and the liberal media in general,” Palin told the Web site The Daily Currant. “But I met with the folks at Al-Jazeera and they told me they reach millions of devoutly religious people who don’t watch CBS or CNN. That tells me they don’t have a liberal bias.”

The original article from Parker now includes this disclaimer at the top:

CORRECTION:  An earlier version of this post and the post’s URL incorrectly reported that Sarah Palin had signed on as a contributor to the Al Jazeera America news network. The blogger cited a report on the Daily Currant Web site as the basis for that information without realizing that the piece was satirical.

To which Michelle Malkin responded: 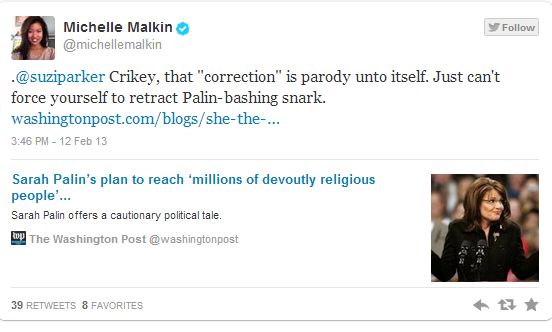 Sarah lives rent-free inside their heads.

yep its cramped, windy and smells funny ….. but it is free

How can the public trust people so humorless?

And the New York Times will editorialize that Sarah Palin should stop misleading the classically trained professional (and legitimate) journalists by allowing parody articles about her activities.

If you read the NY Times, the Washington Post or other famous fish wraps, circa 1940-1950, you will realize that they have become sad parodies of themselves. They have become Norma Desmond in real life. To paraphrase, “I am big. It’s the news that got small.”

Couldn’t happen to a nicer reporter… Bless her heart.

After LI and CI and whatever else is coming soon, I hope we see a PI: Parody Insurrection.

I have to agree with Rush. We’re watching journalism die right before our eyes.

Honestly. You just can’t make this stuff up!

I stand behind Suzi Parker…..so I can push her off the ledge of credibility.

C4P write up is pretty good….

The site is The Daily Currant! Not the Daily Current! Seriously who doesn’t catch that right away?

What a beauty to behold! 🙂

he Al Jezeera thing is not the weakness as much as …

The ‘trying to stay relevant ‘ because she attended Chris Kyle’s funeral & wrote a kind message on her Facebook?

Can people not go to friends funerals these days?

Can people not thank well wishers for their birthday greetings?

Or Is it only Sarah that is not allowed these graces?

Sheesh. This is not just a too quick , too wrong article – it is completely sociopathic.

A while back, the Chinese People’s Daily quoted the Onion, when they declared Kim Jong Un as the sexiest man alive, and treated it as straight news. In the same vein, the American MSM are so ideologically aligned with the Left, that their worldview aligns perfectly with what normal people call ‘satire’

My dog, Aqua Velva, is also unable to tell the difference between a legitimate monster and a vacuum cleaner. Likewise, he treats them both as legitimate threats.

Hah… that’s it, I’m naming my next dogs Old Spice and High Karate.

Well, it is pretty obvious that Suzi can’t see satire from her backyard.

Sometimes when people desperately want something to be true, their perception will turn that want into reality.

I really want it to be spring and 85 degrees but I am not going to put on a bathing suit and jump in the pool.

I wonder what Suzi looks like in a bathing suit.

Sarah Palin is so dumb…. what’s with that “idiotmedia” hashtag? Doesn’t she realize how redundant it is? Not to mention repetitive.

Yes Mal . I agree – the media is redundant & repetitive.

Sarah Palin is not as great as her supporters claim nor as bad as her detractors allege. If the haters really were thinking clearly they would ignore her in hopes that her cache would disappear and she would fade.

However they can’t. And that’s because she is not assessed as a human being. Instead she has achieved the status of a symbol, both for those who love her and those who hate her. She either reflects what the loony left believes is the worst of America, or what her fans see as the best of America.

I know this may sound ridiculous, but I hope she realizes that, despite the venom from the vile, it really isn’t about who she is personally, but what she stands for.

Nobody gets an 80% approval rating like she had in Alaska prior to being picked as McCain’s VP running mate by being stupid, crazy, etc, etc. Those accusations came about because she ridiculed Obama during his elevation to godhood. And the left-wing Jihad was born.