Now they tell them!

But the next 12 months are likely to reveal the opposite. Imminent elements of Obama’s grandest policy move, the health care overhaul known as ObamaCare, are calculated to screw his most passionate supporters and to transfer wealth to his worst enemies.

The passionate supporters are the youth, who voted for him by a margin of 60% to 36%, according to exit poll samples of people 29 and under. His enemies are the elderly: Mitt Romney won 56% of the votes from people 65 and over. And while one of ObamaCare’s earliest provisions was a boon to the young, allowing them to stay on their parents’ insurance through the age of 26, what follows may come as an unpleasant surprise to many of the president’s supporters. The provisions required to make any sort of health insurance plan work — not just ObamaCare, but really any plan of its sort — require healthy young people to pay more in health insurance than they consume in services, while the elderly (saved by Sarah “Death Panels” Palin from any serious attempt to ration expensive and often futile end-of-life care) consume far more than they pay in. There is always a push and pull, however, and this year will be spent laying plans to shift the burden further toward the young. 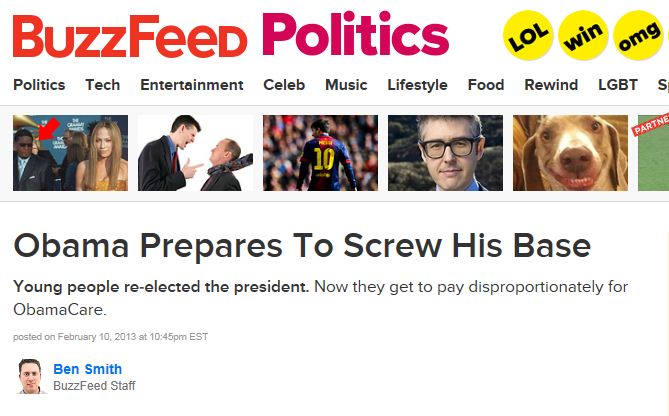 We’ve been pointing that out forever.  Smith tries to turn it around as a good thing — that Obama doesn’t only stick it to his enemies — but try explaining that to the kids who thought they were getting Obamacare with their Obamaphones.

Time to bring back this photo from 2008? To paraphrase Dylan, “Everybody must get screwed…”

It’s just that a very few, select cronies will get to be co-screwers. This is always how the Collective works.

Meet the new boss same as the old boss.

Have to disagree that young people re-elected Obama.

It was the African Americans voting multiple times and illegals voting fraudulently who foisted the leftist regime on us again.

There is every chance that the ‘screwing’ will cause a desired reaction – a type of revolt, but a very modest one, because, after all, he is The One. And this reaction helps lay the next steps to a Universal Payer plan.

So not only does he admit that “Ignoramus” Palin was correct, but that by making her statements about Death Panels, she managed to cripple the concept. Pretty powerful politics for a lady who is supposedly too dumb to be VP.

When you misappropriate individual market choices, as ObamaCare does, the only way to allocate resources is via rationing.

I’m awaiting the publication of apologies to Palin. But not while holding my breath…

And the cries will ring out from basements around the country, “But, MOM, this is going to be like paying rent to live here!!”

And soon the minimum wage will be increased so that baristas can have some money left over after they pay for the Obamacare mandate.

In other words, the consumer will pay a minimum wage “tax” increase to fund Obamacare. And then, most likely, many more people will become jobless and dependent because of the higher costs of goods and services driving consumers away.

No way the Democrats will alienate the youth vote for very long. They want the “20 somethings” voting for them for another 60 to 80 years. And the only way Democrats build coalitions is by dividing people into different identities – then use government coercion to take from those who have earned what they’ve got and give it to a Democrat Party client. Always disguised as compassion, empathy, fairness, and equality.

My guess is student loan forgiveness is coming, perhaps even in the SOTU tomorrow. Nothing Obama says surprises me anymore, so I would not be surprised at all if Obama used the occasion to stroke the egos of the youth by portraying them as compassionate angels for subsidizing the healthcare insurance of the elderly. Then noting that such compassion deserves its own reward, so why not forgive the student loans of the youthful angels?

During and after debates over Obamacare, many proponents pointed to the consumer-driven healthcare system in Switzerland. Switzerland requires everyone to purchase healthcare and subsidies those who can’t afford it–much like Romneycare and now Obamacare. They currently subsidize nearly 1 in 3, though the people are quite wealthy on average compared to those in most other countries.

Well, now Switzerland is fearful about the future of its supposedly great healthcare system. From the Swiss Review, the government published newsletter for Swiss citizens abroad:
http://www.revue.ch/schwerpunkt-en

If people have to be 21 to drink and 25 to buy their own health insurance, perhaps we can discuss raising the voting age.

This could have been easily summarized as “Ben Smith swallows”.

From a military retiree who just saw his monthly health care cost go from $18 to $22 (along with a $30 COLA) to the youth of our nation – if yer gonna be stupid, ya better be strong.

O’bammy is part of Illinois machine politics that are the most corrupt in the nation and EVERYTHING is about them, money, power and policy.

Couple this with the liberal/progressive/democrat sponsored dumbing down of America and we find ourselves where we stand, ad crumbling nation with little hope of improvement anytime soon.

Now his base faces inevitable cuts simply because none of what he has proposed or inflicted is sustainable. Worse, the government is never efficient when it come to running anything.

None of that money will be going to people over 65. Obamacare does NOTHING for seniors, who are and will continue to be covered by Medicare.

The effects of Community Rating he describes are correct: young people will pay more and subsidize older people, but ‘older’ being defined as under 65. Also, men will pay more to subsidize women. Women consume more healthcare than men, so their insurance costs more, but under Obamacare’s Community Rating that will be illegal. So, half the country (men) will be subsidizing the health insurance of the other half (women).

In other words: it only applies to insurance plans bought on the individual market. It will have no effect on Medicare, which covers the vast majority of the elderly.

So, there goes most of Ben Smith’s premise for his article.

First, it is funded primarily by gutting Medicare. $714 billion in the first 10 years. The money is collected under the tax that funds Medicare but is then redirected to fund Obamacare. Therefore, expect pay cuts from Medicare to doctors/hospitals and rationing from Medicare (a great many treatments / procedures covered now will no longer be covered).

Obamacare also destroys Medicare Advantage. This was the price AARP exacted on the White House in exchange for their support ($100 million in commercials, for starters) of Obamacare. AARP is a >$1 billion health insurer that poses as a non-profit senior’s advocacy group (technically, their for-profit and non-profit functions are split). They sell so-called ‘medigap’ insurance – to cover what Medicare does not. This competes directly against Medicare Advantage, which is taxpayer subsidized, so AARP wanted MA destroyed.

Obamacare also creates some 52 new agencies/boards/bureaus/directorates. One of which has a singe purpose: find more ways to cut Medicare. They only have two tools to do this: cut payment rates to doctors/hospitals and reduce what Medicare covers.

If anyone can find out who, exactly, Obamacare does NOT screw (other than illegal aliens), let me know. From what I’ve seen, its a comprehensive disaster for everyone.

From a non-healthcare perspective, of course, its a huge boon to Democrats: it simultaneously massively increases the power of the federal government while permanently shifting the ideology of the country far to the left, thereby assuring them of a permanent majority.

“Hey, kids! This is what it feels like to be a productive member of society!”

John Goodman’s famous rant, as he bashed in the sports car, in The Big Lebowski comes to mind. “Hey kid! See what happens when you…” Y’all remember. 😆

My dad used to say, “make sure the screwing you get is worth the screwing you take.” He also said, “don’t let your alligator mouth overload your hummingbird ass.” Somehow both are appropriate when discussing politicians in general and Obama in particular.

That was supposed to be a response to Rags above with the Dylan quote.

How could he do this to them? Doesn’t he understand who they are? They’re the next generation. They’re our kids. The promise of our future.