Okay, I see you are.

A misplace Californian, spotted at a Taco Bell drive-thru in Longmont CO. 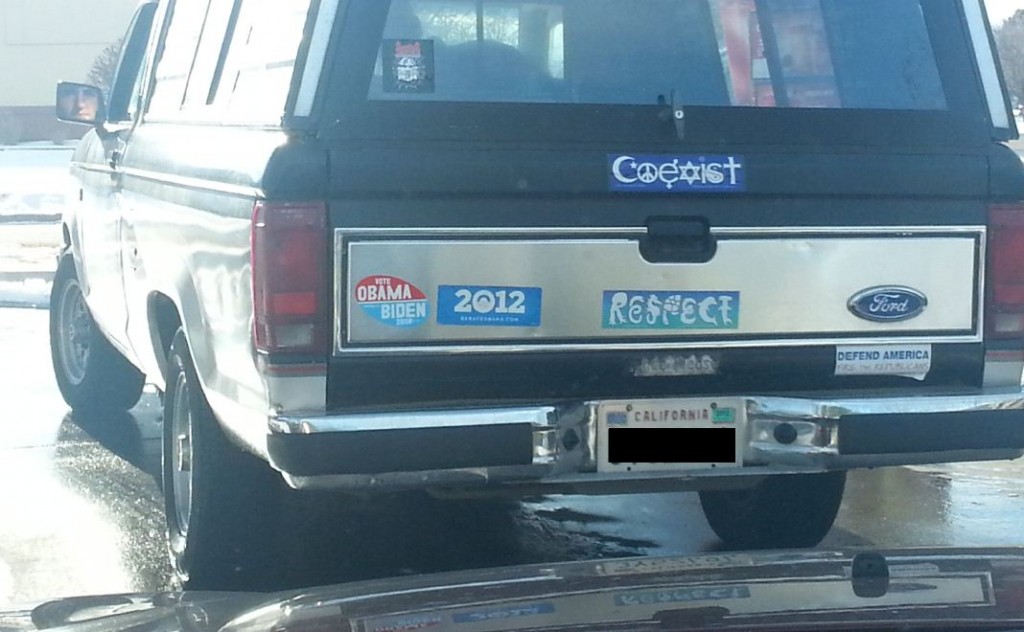 RESPECT ( Meaning it is what “I AM DUE.” Exceptions include but not limited to: Tea Party, Conservatives, Pro-Lifers )

I had to look carefully at the “respect” sticker–dolphin, seahorse…. Seems to be an equal-rights for animals thing, or a save the oceans thing. The “e” must be an eel, otherwise it’s too darn close to a coiled snake, which might bite them given the chance to seek liberty or death.

Shouldn’t these bumper stickers be on a vehicle which leaves a smaller “carbon footprint”?

Stole my thunder. Shouldn’t that vehicle have been turned in under the Cash for Clunkers program for a Prius or Volt?

These miss-placed Californians are the reason colorado is purple.

Don’t kid yourself. CO has turned blue. Establishment Republucan establishment has ensured that.

That “Defend America” says something about Republicans.

It should say, inhale my exhaust.

Come on, Folks, give this person some room! This person might become an endangered person given a few more years of his, or her, enlightened ruler “O!”

OTOH: ifnn the creek don’t rise and the sun don’t burn out, CO might become a Red State!

We Conservative Californians have a secret plan to drive all the Liberals out of the state and into other states. We have an inside connection at EPA, and so were able to get ‘Liberalism’ not defined as a toxic waste, so we were able to ship it across state lines.

We’d hoped we could ship them to Mexico or Canada, but they weren’t having any of it. Putin and China won’t let them in either.

I’m dating a woman right now that has 3 of these on the back of her minivan.

Of course, my last girlfriend was a member of the Communist Party. But she had good reason: she grew up in Beijing. To her, being in the Party just meant you were allowed to have a car, could live in a better apartment, and had much better job prospects. Actually, she was the most cut-throat capitalist I’ve ever met. It wasn’t just her either: all her friends from China were the same way.

The US born school teacher I’m currently dating is FAR to the Left of the communist I previously dated.