Updates: John Boehner was relected, but just barely. It looked for a short while like he may not make it, but once it became clear he would get a majority of those voting, some “conservatives” who had not voted when first called decided to vote for Boehner. 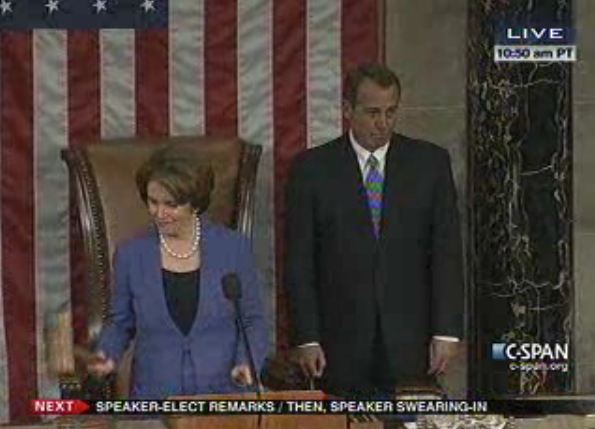 Here are some tweets explaining how it went:

Boehner: if you have come here 2 see your name in lights or to pass off political victory as accomplishment, you have come 2 the wrong place

Class act: Boehner goes straight to Broun and Labrador, who are sitting in the aisles. Looks ’em in eye, shakes hands. Boehner smiles.

So: In short, we were over 17 for a minute, looking at 2nd ballot, when the conservatives come to floor, save Boehner from 2nd ballot

To be clear, there were never 17 clear defections. That # included the no votes.

At least 12 against Boehner: Stockman, Mulvaney, and Labrador voted present/declined to vote, plus the Big 9

So Garrett/Bachmann did not put Boehner over the top RT @chadpergram: 426 total voting. Means 214 is magic number to elect Speaker.

Schweikert votes for Boehner despite being stripped of committee assignments.

——————————–
Going on as I post this. No other Republican names were put in nomination other than Boehner.

Everybody raise a glass for the Speaker of the House!

The Grim Weeper needs 218 votes, if not then another name will be summitted.
Considering this trecherous bastards revenge this is a prudent move.

This will end up just like the presidential nomination.We get the sellout the elite wants us to have and like it

All talk for show!

I wrote my Rep. weeks ago that I’d prefer the office remain unfilled provided the spending was not reduced at least to the measure of the sequester.

Perhaps I should have dispensed with caveats.

The United States is holding on – just barely.

Enjoy your next two years, John. Vote in more perks and retirement benefits like a good establishment satrap. You and your party are done.

The GOP can kiss my ass.

[…] Insurrection gathered up tweets live, explaining how the re-election of Boehner as Speaker went […]

I don’t have words. The nation is lost.

And there hasn’t been a Loggins & Messina video in months…..

And WE think Obama voters are stupid for doubling-down on failure??

Time for a financial war on the GOP — not money. Not a dime.

It just tells you how weak the conservatives are within the party. The strongest survive. Boehner is one tough cookie.