Saw this the other day and managed to snap a picture.

I can’t tell whether the “free government phone” banner is with the cheap smokes place or the cell phone place, but I find it hard to imagine the cell phone store helping out their direct competitor – unless various cell phone carriers are in cahoots with the program to get some boodle somewhere along the way….

Thanks for all your hard work & effort! 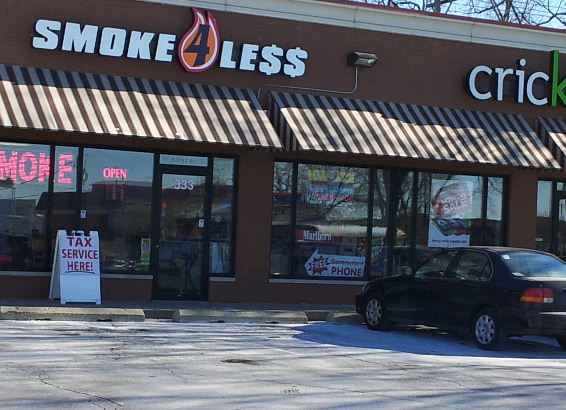 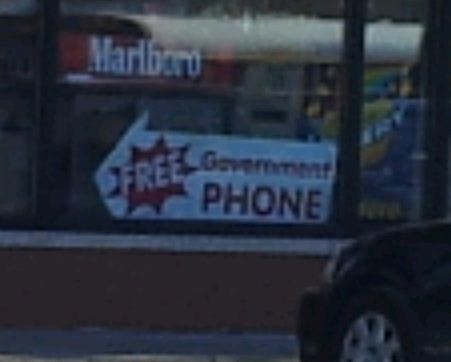 Most likely the free fone will be found at the joint that sells lottery tickets, takes foodstamps, sells cigarettes and maybe even has a tat parlor in the back…

It’s the “Tax Service Here” sign that has me amused. In the low-income areas of town, everyone wants to help the “poor” do their taxes online. They find all sorts of income credits for the illiterate worker in order for him to be able to pay for that next car, television, or . . . carton of cancer sticks.

More likely reason for the abundance of tax services is their granting “Instant”tax refunds-at a high interest rate. We know that “Instant” is always good and necessary.

The photo did point out one of my particular bugaboos. A friend started a Pet Food Pantry so that families in financial distress would be able to feed their pets rather than turn them into a shelter which might euthanize them. We donated food to families once a month, requiring them to come and pick up the food. We noticed a high percentage of those arriving had a cigarette hanging from their lips. And do to the proximity of the donation site to a Mickey D’s, many seemed to have a Happy Meal-Supersized of course- with a big gulp soft drink. Together the cost of cigarettes and their fast food fix was more than the price of the pet food. We declared the donation site to be a smokefree zone and promptly lost several families, apparently their nicotine addictions outweighed their need for free pet food. Just sayin’…..

re: “The photo did point out one of my particular bugaboos. [snip] We declared the donation site to be a smokefree zone and promptly lost several families, apparently their nicotine addictions outweighed their need for free pet food. Just sayin’…..”

Yup, this really points out one of my particular bugaboos. As someone who has lived in street missions in the past, I always held a special place in my heart (the black part of my heart) for the do-gooders who sat around gossiping about the ‘poor helpless reprobates’ who knocked on the missions front door. Liberal do-gooders who get all self-righteous because the world doesn’t operate according to the self-imagined nirvana they’re attempting to impose upon others. I can see everyone gathered around talking about that “evil” smoker and McD’s gluttons not being able to feed poor little ‘Fluffy’.

Personally I can see two solutions: ONE, for the liberal do-gooder to gain a tad bit of integrity and ditch the disdain for the humanness they will see every day of their sojourn on this dirtball. TWO, for the gluttonous tobacco smoker to send the do-gooders a big platter of deep fried ‘Fluffy’. Fried cat and fried squirrel taste almost identical – dog is a little greasy though. Might as well eat them since priorities dictate they can’t afford to feed them, eh? As Monty Python would say, I flick my ashes at you! http://www.youtube.com/watch?v=9V7zbWNznbs /rant

So the fact that altho we helped many families with their pet’s food, vet bills and spay and neuters, we were wrong because we questioned some choices of the people who sought out us for financial help?

Your comment seems to fit with today’s creed that all choices are equal and that there is no wrong choice. That is why some parts of our society have over 50 % illiteracy, over 50 % single parent households, and a high % of incarceration.

All choices are not right and equal. Society has lost its moral compass, and its shame.

I’m in a hurry because I have to go buy some smokes, but I’ll try to pump out some ‘fluff’ for you to consider.
1] If you want to help people, then ‘help’ them – stop judging them.
2] Everyone has a back pocket of words, attitudes and opinions – who cares about yours? Answer: You do.
3] You cannot make another persons decisions for them – why? Because THEY have to live that decision, and THEY have to suffer the consequences – either good or bad. Smokers? Is that any worse then sexual promisquity – people who have more than one sexual partner in a lifetime? Go speak to the women who have cervical cancer or the ‘gay’ person with HIV and get back to me.
4] You don’t have to worry about society and it’s loss of moral attributes – you have to worry about your own. You can’t fix yourself, how do you plan on fixing anyone else. Try being a BRIGHT LIGHT in a world full of darkness instead.
5] Eating pets: Take a look at the world and history. Only affluent societies have pets. It’s not unheard of for women to eat their own children when famine comes, while the gadfly’s cluck their tongues self-righteously, Fiddo and Fluffy having been eaten the week before! The French eat everything with a sauce. You would be surprised what a tangy sauce can cover up!
6] Gotta go, Cigs are on sale this week!

Wow. You can get your tax rebate early and then buy some smokes and then get some lottery tickets and then get a few beers and then get a free Obama cell phone and then you can call the Planned Parenthood phone number on the wall. Convenient. You can get all of this done in short order and then head back to your big screen TV and watch The Real Housewives of Orange County. Now that’s Progress!

The liquor store is across the street. Interesting to note that both of these also appear to be new businesses created by the Obama economy. The storefronts are pretty recent.

We can look forward to four more years of payday loans, casinos, and the like.

Where was the sign that says “We accept EBT”…?

It’s probably just understood that they will. The “Free” on the window is the magnet.

I’m sure they sell ‘food’ at smoke4le$$. Most of their patrons probably buy a pepperoni stick with their purchase!

Notice they are right next to the cricket store… so when someone goes to cricket looking to buy a phone, they see the sign and say: “hey, I can get a free phone instead!”

Just a thought. Would it not be ironic if the “free” government phones included a program that enabled the government to listen in on the conversations of these freeloaders? Maybe they would learn where the drug deals are going down, where you can buy an illegal firearm and how to scam the system some more.