Despite the fact that the NRA has condemned the group for being anti-gun, MAIG is attempting to define the terms of the debate in ways to positive their aims more positively. In fact, they attempt to describe themselves as similar to the NRA despite being condemned by them. Mayor Bloomberg, co-chairman of the group, has said that the NRA “offered a paranoid, dystopian vision of a more dangerous and violent America.”

Nevertheless, in MAIG’s infographic, they say:

Support for common sense gun laws is even higher among those who don’t own guns. When we’re standing on common ground – alongside NRA members – why has nothing been done?

Take a look at how the anti-gun group implemented these tactics in this recent infographic, which they entitled “We Agree” (click to see entire infographic): 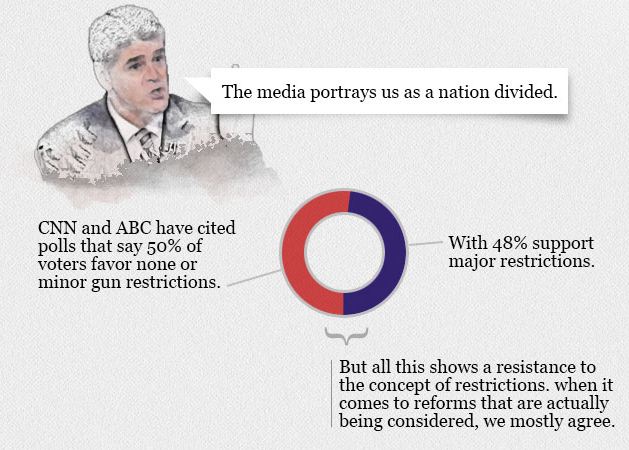 This, along with several almost comical conclusions illustrates the tactics MAIG is using to conceal their aims — to restrict the Second Amendment — and empower government against law-abiding citizens. In particular, this infographic employs these tricks:

MAIG, which far-left Congresswoman Jan Schakowsky just took to the airwaves to promote, attempts to describe their position as “majority.” Huff Por reports that in the wake of Sandy Hook, their membership has skyrocketed.

Not everyone is buying MAIG’s gun-restriction message. A website has sprung up, “Gun Owners against Illegal Mayors,” which details the illegal activities of many of the members of MAIG. NRA-IL wrote the following post on the front group, including:

Despite its very misleading name, this national group of anti-gun mayors has lobbied Congress against national reciprocity of state Right-to-Carry permits, against much-needed reform of the federal Bureau of Alcohol, Tobacco, Firearms and Explosives (BATFE), for regulating gun shows out of existence, and for repealing the Tiahrt Amendment that protects the privacy rights of law-abiding gun owners and limits disclosure of sensitive firearm trace data to protect law enforcement personnel and protect lawful gun manufacturers from bogus lawsuits.

Bloomberg created “Mayors Against Illegal Guns” as a front group to lobby Congress to oppose important pro-gun reforms and support new federal gun control restrictions. And some mayors have joined or been duped into joining this anti-gun Bloomberg crusade. If your mayor has joined MAIG, it is critical that he or she resign from this anti-gun group. You can do your part by contacting your mayor’s office today and urging your mayor to withdraw his or her MAIG membership. A number of mayors have already quit the anti-gun Bloomberg coalition and yours should be the next one to do so.

Read more about MAIG and their principles here, And, I invite you to include whichever statement you find most comical/misleading from the infographic above.

Their who argument revolves around selling what is essentially a policy incrementalism. Like so many policies, it might look good on paper, but when the bureaucracy gets hold of it and starts working the policy, soon no one knows what it means. Then, we’ve created more fodder for activist judges.

If the right was as rabid about guns and gun rights as the left is about abortion and their precious SCOTUS-created abortion rights, we’d have the right to carry a full-auto weapon on our person at all times, and the government would be required to provide us with free ammo. Every candidate for higher office and appointee would have to pass a gun rights litmust test, and if he or she had ever case a disparaging word about firearms or the Second Amendment, he or she would be promptly ‘Borked’.

Colorado’s Governor, Governor Hikenlooper was once the Mayor of Denver, and a member of MAIG. As Mayor, one of his employees, who was using two Social Security numbers, neither of them his to use. Garcia-Gomez murdered a Denver Police Officer, worked a full shift at one of the Mayor’s restaurants, and then fled to Mexico. While the employee was illegal, I’m not sure the gun was illegal. Unless it is illegal for an illegal person to use a gun to kill an American cop. But that doesn’t make the gun illegal. Now Hickenlooper is Governor and no longer listed as a Mayor Member. How did he get elected Governor of Colorado?

He got to be governor because of all the idiots who came here from New York & California. Not satisfied with fucking up their own states they had to come here and start fucking up mine. To top it off the sac-licking fuck-ups bitch about how unfriendly we natives are. Obviously we’re not unfriendly enough.

I am taking a coursera course online on how to reason and argue. It is essentially a logic course but quite a bit of fun too. Needless to say the subject of gun control is dominating discussions in the forum. I have taken to arguing against the majority who is clearly of the ban-it-first-ask-questions later variety. I am pleased to discover I have used most of the tactics Anne points out were used in the infographic above. 😀

Thus far, my favorite argument for gun control came in a link from a blog making the case self defense is a weird argument for owning a gun. No I am not kidding.

Citing a hypothetical from the Atlantic suggesting most people would prefer to have a gun on them if they are approached by a psychopath wielding an AR-15 the blog writer professes pro gun groups don’t understand the argument being made:

I know NRA types think that when you say ‘I would rather have a gun’ in this scenario, they’ve won the argument. But I don’t think they actually know what argument they’re making.

It’s a bit like someone asking you ’If you were to stumble upon a black cobra, would you rather have a mongoose with you, or not?’

I would like to have a mongoose with me in that situation (and many others, obviously). But what is that an argument for? That I should own a mongoose? That everyone should?

Personally, I would rather live in a society that minimizes black cobra attacks than one where I am required to take care of a vicious rodent to survive. Just seems more efficient that way.

I can’t think of other political arguments where an extreme, once-per-lifetime scenario is used to justify everyday behavior. ‘If an air conditioning unit fell out of a sixth-floor window and was hurtling toward you, would you rather have a steel parasol, or not?’

Here is the BEST thing I’ve ever read against the typical anti-gun argument. Note in the article the listing psychotropic drugs all these shooters have used. The article is pure factual and logical gold.

Oh my gosh, just in time. You should see the craziness someone just argued in response to my last post. I have that post bookmarked and ready to go.

The person known as tnc in the link is an idiot. I’m more than a little tired of hearing journolisters and academics comment on how training to kill affects one’s soul. These f-ers can’t butter their own bread.

As for the idiotic hypothetical. If a crazy person is coming through my door I plan on shooting the bastard until it stops. I do not give a flying f— what he/she/it has in their hands. I’m not the one who does not have a proper grasp of the argument here.

Look up the history of the NAACP and the NRA. It might surprise some.

In Texas, the single largest demographic group seeking CCP for the last five years has been black women.

Nanny Bloomers and his co-liars are unique in America in seeking to strip minorities and women of the ability to defend themselves.

And, while that is unique, it is consistent with his recent drive to dictate to patients and doctors how much pain people will endure.

He is the very model of the modern liberal fascist.

Agree with your post, but one idea: ‘liberal fascist’ ought to be written as ‘fascist faux liberal.’

I don’t generally do this, but will make an exception.

Also, you can verify the claim by researching the TDPS website.

There are some great articles in that search. Thanks for the info.

I was engaging some of my Left of Lenin sister’s yesterday about gun control. They keep bringing up Sandy Hook, so I countered with Chicago, which has the toughest gun laws in the known universe. “So?” was the typical lefty response.

I pointed out that all totaled, every week or two, Chicago kills the equivalent to a Sandy Hook or an Aurora, despite no one but the criminals being armed. “That means, you are against qualified minorities being armed in the murderous Chicago ghettos for self defense, just so we won’t have any more kids killed in white suburbia? Where is your outrage?”

Details. Lefties never have any details. Yes, no one wants “guns in the hands of children or criminals”, so how does that actually work, because it currently is wholly ineffective.

Then, I correlated the criminalization of innocuous objects, like flash-hiders and high-capacity magazines to drug laws, which criminalize things like pipes, syringes and steel wool.

A better name of MAIG would be NAG “Nuts Against Gunownership”.

It’s all about control.

bloomie should be on stage. It leaves at midnight.

The media is negative biased in its nature. The media corporations want us to feel shock and outrage. What is good and lawful and pure doesn’t sell. Shock and awe and the outrage sells. The ‘bad” “breaking news alerts,” stream constantly.

I just turned on the TV. I come across Scarface on TV- 5:00 pm CST. Sunday afternoon: I see a man chain sawing another man apart. Blood is spattered everywhere for our children to take in. I see men shooting and killing each other as if it were nothing. Hello Mayor Bloomie and Tiny Dancer Rahm! Shouldn’t you denounce crap like this before your denounce big soft drinks?

They can’t win honestly and the end justifies the means for them. A large segment of the anti gun bloc is truly phobic and totally beyond the reach of reason.

Former Mayor of Knoxville, Bill Haslam, was a member of Bloomberg’s MAIG – until just before he decided to run for Governor of Tennessee, when he resigned from the group.

Oh, and he won election and is now Governor of Tennessee.