in a blue county in Ohio.  Could this be to 2014 what Obamacare was to 2010, an issue which cuts across party lines outside of the big cities?

Thought you might be interested in a couple photos from the very blue Lucas County, Ohio, gun show. The first is a pic from the line which wrapped around the corner at 8:15 a.m. just to get in. One guy said in 60 years he had never seen such a packed gun show. Another who happened to be a local police chief was buying 5 guns for family members; he said he would never enforce gun confiscation.

MOST odd was this vehicle I passed while entering the building. The guy must have arrived early since he got a close parking spot; we had to park way out. What the heck would a guy like this be doing at a gun show? Everybody else was talkin’ trash about Obama and the “Dont Tread on Me” flags sold out in an hour. 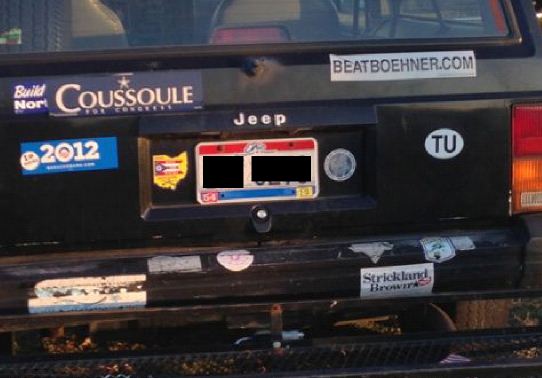 In Toledo, if you want to be employed by someone other than yourself you very often must demonstrate your bona fides. I specifically know a person who is a registered democrat who does not vote that way. He told me that the unions comb the voter rolls to see how the members vote, registration, primaries, etc. The amazing thing isn’t necessarily that this car was at a gun show, but that there was so much visible support for Romney in the fall. Most Toledoans go into the booth and do what they are told…it’s a union-driven low-information paradise.

I can fully attest to your description. I had a guy work for me in the Navy who had grown up in Toledo and went back after his hitch was up. He could spout the union lies better than John L Lewis.

He contacted me via Facebook a couple of years ago and I could only take his postings for a month or so. He’d gone to work at a Chrysler plant and then got laid off. Nothing was ever the fault of the union to him.

Get this. I knew someone who rose to become a supervisor in the corrupt Toledo Post Office. He chose to work nights to avoid the politics, and chewed his nails every time 11:00 p.m. drew near. His boss told him he was the ONLY Republican to ever go that high in Toledo on merit.

That, however, was a long time ago.

Many people are ignorant of important, basic issues. On election day 2012, two co-workers individually expressed to me that they didn’t know who they should vote for. The first, being a “gun nut”, I told him only 1 candidate is for gun control. The second, a union laborer, I asked him if he knew anything about the Keystone Pipeline that 1 candidate nixed, killing the possibility of union jobs. I don’t know who they voted for, it really doesn’t matter because by the numbers, the President’s home town of Little Afghanistan in the north east part of the state will always come out ahead, much like the democratic elections held in China.

Maybe from Rent a Wreck?

Let’s tweak that a bit:
Wreck an Economy
Wreck the Job Situation
Wreck the Building Industry

You get the idea.

DEMOLIBS are two-faced anyway.
Wealth for me, but not for you.

If there’s a substantial number of Palin fans who sat out the election and let Obummer win because Sarah didn’t have a role at the convention, that doesn’t speak well of Palin fans, does it?

Palin is valued by an important part of the GOP coalition. It’s the leadership’s job to ensure that all constituencies in the coalition are invested in the election.

(Btw, not inviting former GOP Chairman Michael Steele to the convention was a similar piece of idiotic arrogance. Whether or not Steele did a good job is immaterial. When the election approaches, you present a united front to the voters.)

The GOP’s attitude toward its voters has been: Before the election, shut up. On Election Day, vote for us. Then, shut up. That dog won’t hunt anymore.

I’m neutral on Boehner, but I’m very open to a Fire Priebus movement.

In other words: “I’ll sit in a corner and keep helping the leftists win until you pay attention to me!” Yeah, that’s smart.

I’ve gotta hand it to leftists: At least they understand that the first order of business is to stop the other side. Many leftists complained that Obama was too conservative in their book, but they voted for him so the Republicans wouldn’t win.

Meanwhile, many peevish conservatives whined,”We keep voting for the lesser of two evils, and what does it get us?”

Answer: Voting for the lesser of two evils gets you less evil than you would otherwise get. Why is that so hard to understand?

The people who thought they would “teach the Republicans a lesson” by sitting home have failed to notice the lesson that’s being taken away from the last election: Voters preferred Democrats. Voters leaned to the left.

How exactly does that prod Republicans into being more conservative?

Nope. I won’t vote for a GOP candidate until the GOP coughs up a candidate I want to vote for. It really grinds you that you can’t win just by running whichever crap sandwich has the next turn in line, doesn’t it?

Keep pushing that party line, and keep right on losing. Your choice.

I think we have to clean up the Republican Party. It was astounding that Ross Perot managed to reach almost 20% but it certainly split the party. The problem now is that we haven’t got any clear leaders; everyone’s running scared which is all part of the psy ops.

It’s fine to STAND ON PRINCIPLE to get what you want but you’re gonna lose again. Leftists have a tremendous machine, even if you didn’t count the natural inclinations of the media and entertainment industries.

It’s going to take some heartbreak to get people back to the fold but it’s going to happen. We have an unbelievably great bench out there; they just need to speak up, which will happen when Joe “Plugs” Biden (yes!) tries to run for POTUS.

In other words: “I’ll sit in a corner and keep helping the leftists win until you pay attention to me!”
—Radegunda

In other words, it’s: “I won’t be your second-assistant stooge and hand you the tools while you drill holes in the bottom of the boat.”

We went to Raleigh for the Dixie Gun and Knife Show this past weekend. The line was around the building, all the way to the road and then into the overflow parking lot. I heard someone behind me say “Where were all these people on Election Day?” Good question. (And ammunition – what you could find of it – was CRAZY expensive, and O hasn’t even officially done anything yet. Sometimes I think we’re our own worst enemies…)

RE: “What the heck would a guy like this be doing at a gun show?”

Recon: it is good to know the ways of your enemy.

Hopefully, he got an education.

I would also suspect that that car parked in close was a Leftist monitor or maybe media, I would have been worried that he was a provacateur, or theoretically he could have been an employee of a vender.

He told me that the unions comb the voter rolls to see how the members vote, registration, primaries, etc.

To be honest, Patriot business owners should be doing the same thing, turnabout being fair play. [and no, do not ever expect fair play from the Left] When you take someone’s job application, it should be part of the process that before interviews the list of names and addresses get taken to the county clerk’s, vote registrar’s, or equivalent office and checked against the public voter rolls. Democrats don’t get called back for interviews. With the economy being so “Democrat-influenced”, there should be enough qualified unemployed people who are not the Enemy that you can hire good staff who are Patriots and not support the Left.

It has been talked about, but not done, however it does make sense to do the same thing for all current employees. Kind of as an extension of the idea that Obama stickers in the employee parking lot should be noted for later reference. That way, if you are an employer and have to lay off or reduce the hours even more than you are going to already have to under Obamacare; ALL OTHER THINGS BEING EQUAL for your specific business, you can simultaneously reduce your level of support for those who are trying to destroy you.

And all Conservatives, not only those who support Palin, are not wanted. They have changed the nomination rules to allow the party machinery to openly oppose Conservatives, and veto them if they get the nomination anyway. Conservatives have been purged from all important House committees, and the last couple of mock “confrontations” with the Left have resulted in victory for the Leftists because Boehner and 40 of his Institutional Republicans voted WITH the Democrats and against the other 170 or so Republicans; giving the Democrats a functional control of the House without responsibility.

While I do believe that the election was lost primarily due to vote fraud [407,000 votes total in 4 states would have turned it. And all 4 states, including my own, were the objects of massive fraud. The Institutional Republicans signed a Federal court consent decree years ago agreeing not to fight vote fraud nationwide.] and not Conservatives sitting it out; if the Institutionals do not want us, don’t be surprised if Conservatives leave. The real question will be is if we have time to create a real SECOND party, or if the country is lost to electoral politics.

Guns yes. But American’s 2014 experience with a likely catastrophic first year of full implementation of Obamacare will also inform voters at the ballot box.

I think it’s pretty clear at this point that Obama supporters are living in LaLa Land. The only way they are going to face the truth is when Obama policies hit their pocketbooks….negatively. So far they’ve benefited. Love the panic when they got their paychecks this year.

Will the LoFo voter connect the increase in autos/gasoline with Climate Change regulations? Republicans need to quit RUNNING SCARED.

The most disgusting to me inauguration day was hearing an ABC reporter gushing about “elderly African American citizens” weeping on the streets that an “African American” could be elected president.

When do we stop with the whole race thing? When do we realize that diversity in THOUGHT is necessary?

Go weep, y’all. You’ve had plenty of years of successful black entertainers and politicians who have succeeded in devastating the average black citizen’s income and lifestyle; you should have moved on by now.

How about we start using our brains now instead of emotions?

http://wibx950.com/texas-attorney-general-greg-abbott-is-launching-google-ad-campaign-to-encourage-new-yorkers-to-move-to-texas-where-citizens-have-the-right-to-bear-arms/
“You’ll fit right in here in Texas!
Here in Texas, you will have the liberty and the opportunity to achieve your dreams. On top of that, we have no income tax, yet still manage to have a multi-billion dollar budget surplus.
You’ll also get to keep more of what you earn and use some of that extra money to buy more ammo…”
Oh, how I love Texans! Check out the picture on his Facebook page-orange dots showing Texas gun owners.
https://apps.facebook.com/336273509819725/