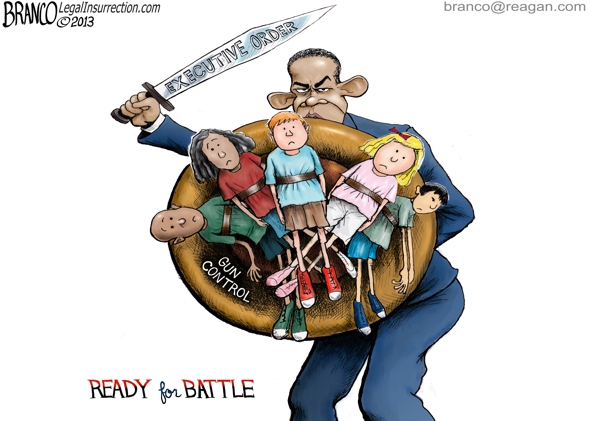 We all know now that The Great Denigrator of our liberties will use who ever he has to to have his way with the Constitution. And that’s because Obama wants to remake America into his own image.

Nobody…but NObody…can make any case that Pres. Fast&Furious made or will make any difference in preventing mass killings with his (mostly EMPTY) shopping list of EOs.

It is so obvious, nobody is really trying.

What is ALSO obvious is that the debt and commitments we face pose an actual existential threat to our children, grandchildren, and the world.

Disarming the law abiding is the left’s unpopular wet dream. But destruction of our free markets through trillion a year deficits proceeds on course.

Free enterprise has created so much wealth and higher standards of living, that only the left’s systematic abuse of the credit card, and redistribution of wealth success, can destroy it.

If the radicals win the “war on free markets”, millions more will suffer and die, and the remaining will be enslaved to Big Brother.

This has been a feature of Obamic attack on America. The attack is multifaceted, and unrelenting.

If you look back, it is actually hard to recall every really bad thing Obama has done since his regime came to power.

I think the attack on the Second Amendment is a distraction from the budget issues, but one cannot dismiss it. We are left to fight a highly organized and savagely cynical organization of enemies, all pushing toward the same general goal…fundamentally changing America. In very, very bad ways.

What this Administration does not want to mention is that these “inexplicable” school shootings of the last 20 years or so consistently track back to school districts that have been on the cutting edge in pushing psychosocial learning theories into the classroom. For the express purpose of altering the way we think and substituting emotion for rational thought.

http://www.invisibleserfscollar.com/what-happens-when-repeated-and-intentional-threats-to-student-beliefs-becomes-mandated/ is a post explaining what is under deliberate assault and why. I am familiar with what is going on in Connecticut and has been for years but I do not talk about that in this post. I believe those families still need time to heal. But it is all consistent with what I explain there.

This matters because those policies and practices are now being nationalized as President Obama’s education initiatives. Going by the name the Common Core the actual documented implementation is light years from the PR campaign. And President Obama himself has repeatedly said the real common core is based on the work he did with Bill Ayers as part of the Chicago Annenberg Challenge. Created in Chicago with initial funding from the ardently anto-2nd amendment Joyce Foundation this reconceptualization of education goes by the name Standards for Teaching and Learning. It pushes a sociocultural interaction theory instead of the transmission of knowledge.

And the first time I encountered these Best Practices was following up on what transformative practices James Holmes (Aurora) high school in San Diego had been piloting.

Since education is such an important component of that fundamental Transformation of our society and our economy, we are still getting all these pernicious education practices. Whatever tragedies they leave in their wake. The 2nd Amendment push is both a diversion and another attack on the negative liberty theory of the Bill of Rights.

That cartoon could not be more apt. Unfortunately.

One teacher with a weapon would likely have saved those children, yet Obama and the media push the opposite way … they will endanger more children, yet claim confiscation is “for the children”. It’s a sick joke.

Mexico has such onerous impositions on gun ownership, it is mostly the corrupt government and drug cartels that own guns. And their homicide rate is 2.5 times that of the United States. Yet Obama’s krewe chose to sell 2000 untracked weapons to the drug cartels, and then to lie to Congress about it.

Then when a U.S. military man gets stuck in a drug cartel run Mexican prison (wtf), trying to legally bring in a gun, they try to extort money from his family, and Obama remains silent.

It’s almost like Obama wants the Chicago gangs and his “federales” to have all the weapons, and he doesn’t really believe in our second amendment. He prefers the Chavez and Castro models, but tells us “sweet little lies” for now.

Obama and Hamas. Both hide behind children.

Heh, this is so wrong! What abot Piers? Shudn’t he be there right behind el Glorious Leder, pbuh, huh?

Let’s see now, who else uses children as human shields?