You mean there is such a thing as a “Vice-Griever”?

This is from the “you can’t make this stuff up” category.

Fox2 Detroit (via Riehl World News) identifies the person who famously shouted various expletives during the attack on the Americans For Prosperity tent (but did not himself engage in any violence):

The demonstration was so far from dull. There was quite a commotion, complete with cursing and all sorts of carrying on.

“Get the (expletive) out of my face,” one man repeatedly says to Crowder during the skirmish.

Who is he? “I am the vice-griever for Local 1299, United Steelworkers,” says Wheeler Marsee.

He’s also a City Council member in Melvindale, a downriver suburb of Detroit. He tells FOX 2 he and a few friends came to participate in a peaceful protest against right to work. And things were all good, until they weren’t. “There was people up there that were rebel-rousing the crowd,” says Marsee. “The next thing I knew, I had the gentleman in question right up in my face. The video didn’t give it justice because he was the aggressor.”

Marsee is talking about the Crowder, who claims he was trying to protect the people and the integrity of that tent. Marsee says he did not touch any person or any property.

“You’ve already destroyed one tent, leave the tent alone,” Crowder can be heard saying in the video.

“Get the (expletive) out of my face,” replies Marsee.

“You hurt a lady in there,” say Crowder.

“Stop rushing me, man. I didn’t hurt nobody,” says Marsee.

Marsee says he didn’t know, or care, who Crowder was. “He literally got six inches from my face.”

Actually, the video does not show Crowder six inches from Marsee’s face, not even close.

Here Marsee is seen officiating at the reinstatement of the Police Chief in his town, handing over the official Police Chief gun: 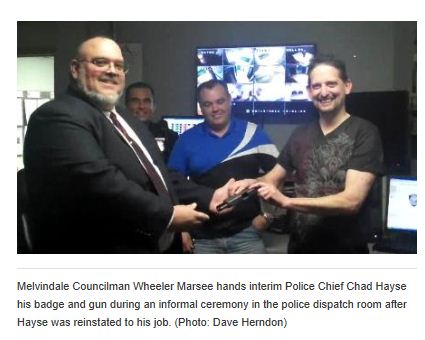 I’m not sure which is the worst.  That he shouted expletives, that he’s a City Councilman, or that there is such a position as “Vice-Griever.”

Is it any wonder why unions so often stifle business growth and thereby hurt employment when people have positions for the purpose of making grievances?

Is there any doubt that Marsee would not hesitate to be inflexible in his job as Vice-Griever even if it hurt the company needlessly?  Here’s one part of his platform:

I will do my best to see that not one right or benefit is overlooked.

My guess is he’s a man of his word.

“The video didn’t give it justice because he was the aggressor.”

I keep seeing or hearing these claims of “other video” out there that shows the “truth”.

Funny, though. Haven’t see a one. I guess this is like the video of Breitbart throwing eggs at a bus-load of thugs…which, with his awesome magical powers, he caused to disappear.

These people are personifications of Obama’s dark side. Republicans need to make the connection and make the ugliness stick. Of course, that’s why we won’t. The effete elites want no part of ugliness.

Darkside, another of those racial code words.

Running his name through Google, it’s easy to find the e-mail address for “Big Wheel,” on his Masonic lodge page here:
http://masonicmasters.com/MMA1.htm

I ran that e-mail through Google, and also did a quick public records search, and didn’t find anything negative about him — no criminal charges, lawsuits, liens, etc., and no weird hobbies or discussions on chat boards (at least not under that e-mail address).

Seems like a solid, law-abiding citizen. Sure, he got a bit emotional at Crowder, but absent any evidence he did anything unlawful, I don’t see that his actions merit much attention — at least in comparison to the actions of those who clearly went over the line.

Oh, and one other thing. I’m not particularly familiar with how unions operate, but it strikes me that Marsee, through his work on the grievance committee, is hardly part of the problem targeted by the right-to-work law in Michigan.

A key reason the law passed is that apparently unions are spending the bulk of their dues money on overhead and political activism, and very little of it on work to improve the day-to-day lives of their members — e.g., on negotiating for better pay and work conditions, and on representing their members regarding workplace grievances. Possibly the grievance committee has some overhead bloat, but isn’t it pretty clear that on a day-to-day basis Marsee is one of the relatively few people at the union actually doing something to help individual members?

“The video didn’t give it justice because he was the aggressor.”
In the language of unions (and the Left), “aggressor” means anyone who does not submit meekly to their thuggery.
If you support unions you support scum.

Vice-Griever?? This is so Orwellian that I am almost speechless!

I’m offering $100,000 to anyone who can disprove the fact that Crowder, besides spitting on Marsee and getting within six inches of his face, also called Marsee the N-word, repeatedly. I’d say, at least 15 times.

LukeHandCool (who has witnessed serial grievance filers … and who marvels at the coincidence that they are always, always the worst workers … usually totally incompetent or totally without work ethic, or, unfortunately, usually both)

It’s my impression, too, that many grievances — especially in the public employee sector — are dubious, and mostly function to gum up the works and deter employers from trying to get rid of problem employees.

But still, Marsee is involved in one of the few union functions that actually involves delivering services to individual union members, and presumably he has to do a decent job of that to keep getting elected. Now that union membership is no longer compulsory, workers will be able to vote with their feet if they don’t believe the cost of union dues is worth the services they receive from Marsee and other union officials.

I’m a union employee working in the public sector.

I would guess I’ve seen maybe a couple dozen instances of grievances being filed, and I was interviewed as a witness for one of them. In my opinion, not a single one I’ve seen so far had merit.

Unionized public employees have, by and large, such an inflated sense of entitlement.

If I were to write a parody of what I’ve actually seen, I’d have to tone it down to make the characters believable.

Employees threaten “I’ll file a grievance!” often after receiving the slightest reprimand for something so egregious that they’d have been out the door on their ass had they tried it in the private sector.

Supervisors hoping to promote in the future, fearful of having a history of grievances filed against them, turn a blind eye to incompetence and unbelievable laziness.

In my perfect world, public employees would have to negotiate their salaries and benefits with the taxpayers and have their work reviewed by the taxpayers, also.

Heh. Looking at the photo of Councilman Marsi and Police Chief Hayse, I notice that Chief Hayse is violating the the most important rule of firearms safety, “Never point a gun at anything you don’t want to destroy.” (and yeah, I see that the slide is locked back.) Freudian slip or fundamental ignorance? Either way, he certainly seems pleased with the prospect. I don’t know the inside story but could this sort of behavior have been the reason for the Chief’s original dismissal?

I also noted that the chief looks like someone selling meth on the street in Houston.

But this IS the Detroit area…

Councilman Marsi looks like he took too much to heart the saying, “It is a wise man who builds a shed over his tools”.

In his 1982 film “The Dark Crystal,” Jim Hensen had a set of characters called the Skeksis who were bluff, oversized vulture-like tyrants who used the power of the “Dark Crystal” to continually replenish themselves. The hook was, however, once the Skeksis were stripped of the power of the Crystal and their fine raiments shed, they were shown to be merely degenerate, wasting-away beings with absolutely no power to carry out their nefarious plans. Anyone who seen that film will certainly remember it.

Long story short, that’s exactly what the bellicose Mr. Marsee puts me in mind of, a Skeksis … and once he loses his union power he’ll become just another ugly face in a very long, long line of statist degenerates.

The ‘Right To Work’ meme and movement is pure genius and most progressive elites know that far better than most conservative elites at this juncture.

Liberals/Progressives are on the run.

This wasn’t just an attack on conservatives. There are multitudes of union rank & file democrats and non-affiliates being held captive; unwillingly forced into slavish union membership.

This is a case of conservatives spearheading a defense of society in general against a grave progressive social injustice.

This was a very public and indefensible progressive fascist and racist attack on society itself.

The wink-and-nod Liberal Media has also taken a significant PR huge hit as well for their apologist coverup of the liberal/progressive criminal intent and behavior, thus revealing the Liberal Media’s false pretense as a putative moral authority.

Society in general is learning valuable lessons about liberals/progressives and their Liberal Media from The Right To Work Movement aka The RTW.

To paraphrase the grievance-monger-in-chief, “At some point you’ve eaten enough.”

Vice-Griever Would that be someone who complains about the lack of hookers?