As noted before, some left wing blogs and a law professor commenter here have asserted that the union guy who punched Steven Crowder several times in the face must have been acting in some manner of self defense because a video shows the attacker getting up from the ground before he threw punches.

The video does not show how the union guy ended up on the ground, but it does show that Crowder was several feet away and not physically threatening the union guy before the attack.

Via Jim Treacher back on December 14, another video I had not seen before shows the union guy taunting and trying to confront Crowder prior to the attack:

The following video was shot before the attack on Steven Crowder in Lansing last Tuesday. If you want to “selectively edit” it yourself, you can skip to the 1:10 mark. That’s where Tony the Union Goon, the attacker whose last name is still unknown, first appears:

Now, whether you think it’s worthwhile to try debating with these guys — I tend to think not — that’s all Crowder was doing. He was expressing his opinion about Right to Work, and trying to get somebody to actually engage the argument instead of deflecting and threatening and namecalling. He wasn’t inciting anyone, unless you’re so thinskinned and unsure of your own beliefs that simple disagreement is a threat.

But Tony the Union Goon didn’t see it that way, as witnessed at the 3:00 mark. Crowder was posing for a picture with somebody, Tony waved his sign in front of the camera, and Crowder told him to stop. So of course, Tony the Union Goon calmly and logically retorted: “Don’t f*** with me. You’re a f***in’ idiot! You’re a rat son of a bitch!”

Jump to the 1:10 mark and 3:00 marks (screenshots below) to see how aggressive the union guy was, including pushing his sign in front of the cameraman filming Crowder: 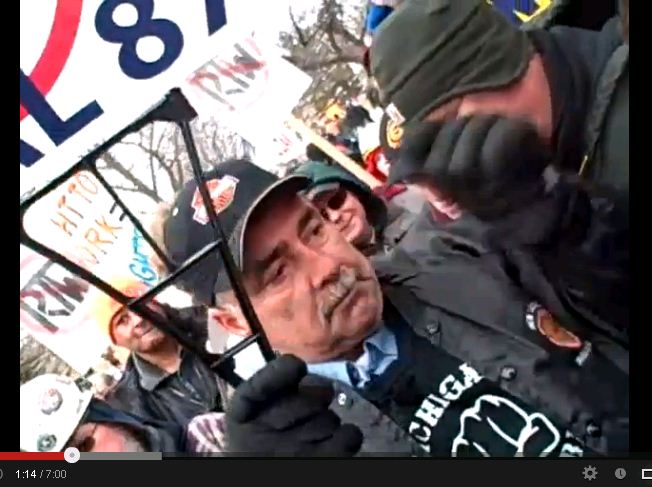 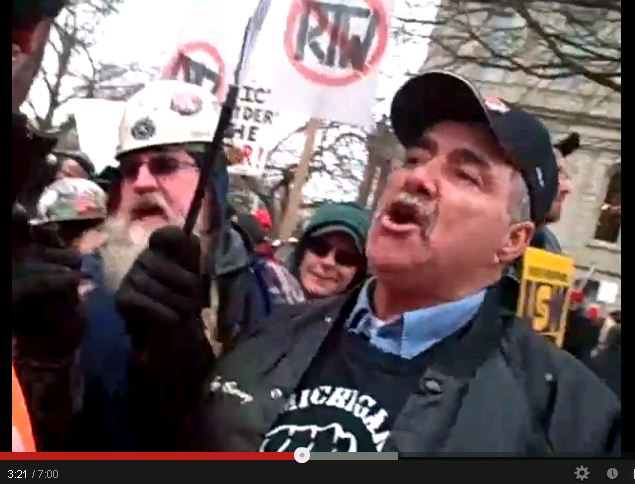 The State Police are investigating. One of the things they will consider not only is the union guy’s aggressive behavior before the punch, but also that Crowder was not threatening and even had his back turned before the sucker punch.

As much as they now love “stand your ground,” defenders of the union guy are going to have a tough time showing his use of force was legally justified.

Back in the glory days of the Wagner Act, such yelling matches and rough stuff were nearly always undocumented by spectators, and when they got to court the unions always had the benefit of he-said she-said testimony without actual photos and sound of the incidents. Tony the Union Guy would have had twenty witnesses all swearing that he was the voice of reason and only defended himself against the hostile and aggressive Crowder. THAT’s union solidarity.

Now it’s different, thanks to technology of affordable cameras and videorecorders, and the unions have lost the solidarity advantage to a very great extent. The cameras won’t lie to a jury.

Who among us, like the always good-natured Crowder, surrounded and vastly outnumbered by thugs hurling “You’re a f***ing (this/that)” wouldn’t physically attack one of them in hope of intimidating the threatening hordes?

I know that if I were outnumbered 1,000 to 1 by an angry mob, the thing to do would be to knock or push one of them to the ground.

Hey, Andy Sullivan – you went on Hannity and Mike Gallagher’s radio to claim that the video had been edited to hide the fact that Crowder was the real aggressor.

Where’s the footage? Did you see it? Who showed it to you? Are you a dupe or a liar?

Here’s a thing to listen for…

drums. NEVER a good sign these days. Never did hear a drum at any TEA Party event.

And note the rise in tempo during the video. Things were bound to go south.

People like that union thug are mentally ill. You don’t get that enraged otherwise. No one could be angrier than I am at what’s happening in this country but you won’t see me taking a swing at somebody, no matter how much I disagree with them (well, unless they swing first, then all bets are off)!

I used to work in a closed shop. We would go out on strike and I would walk the picket line ’cause otherwise no strike pay. But when the crazies started exhorting us to “block the trucks” coming into the driveway, I simply walked away, taking a good many people with me. You think I’m going to stand in front of a truck bringing supplies to a hospital? You’re freakin’ crazy, man! And then during the last strike I had the misfortune to participate in, we didn’t even have strike funds because the president of the local embezzled it and sent it all to the IRA in Ireland! Yeah, we really need unions!

The funny thing about the strikes I went through – I’m pretty sure the union and the company were in it together until that last strike. The reason I think so? We would, like clockwork, go out on strike every two years for two weeks, the strike would be settled and the company would then announce another new building or new program. Never failed!

Ahh yes, the Soviets. Ya’ know, that idiot onion union fella’, bears a strong resemblance to that Georgia boy Jughashvili.

My question: Is this guy a US Army Corps of Engineers (USACE) employee violating the hatch Act? On paid time, leave, what? That hard hat is USACE property, issued but still owned by USACE. Real curious here how and where he got that hard hat?

From what I’ve seen on various videos this guy, purportedly “Opalewski”, is one of the punch throwers, tent wreckers, and the man who shouted “I’ve killed 20 men” yada yada in his rant.

Messed up my own link..sorry. Here is the image.

If he did his job right, their brakes would have worked.

LOL that was awesome 🙂

Acts like this have to be punished if we want to maintain any semblance of civil society and rule of law.

Oh, you don’t understand. These union thugs are just embracing free speech. Punching you in the face is there way of letting you know that they heard your point.

And, they were also embracing diversity. They were using expletives and punches directed at people different then themselves. How nice of them.

And, of course there was no bullying because these are leftist thugs. If they were righty thugs then that would be bullying.

Viewing the films it occurs to me that there is a lack of diversity. Few blacks, women, Hispanics and Asians. And for the IBEW, the International BROTHERHOOD of Electrical Workers. What’s with this BROTHERHOOD stuff. No sisters, mothers, daughters, Flukes, or Monicas?

Why do these unions hate minorities and women?

none of this matters at all because LOOK A SQUIRREL

Hopefully, there’ll be criminal prosecution. Even if there isn’t, there are grounds for a terrific tort lawsuit, not only against this union goon, but against the union — a very deep pocket.

Go for it Steve!

The state police are investigating? What are the odds of them ever finding the assailant? All they have are close up pictures, medium frame pictures, his wearing a union jacket with his name, union, and local on it. And a recording of his voice. How are they going to find him with only that information? They have a better chance of finding Judge Crater in Michigan.

Sadly, it will be one of those mysteries that law enforcement just cannot solve. [is the /sarc tag really necessary?] And I suspect it will be the beginning of a trend.

Here’s a thing to listen for…

drums. NEVER a good sign these days. Never did hear a drum at any TEA Party event.

And note the rise in tempo during the video. Things were bound to go south.

That brings to mind a re-run of “Fellowship of the Ring” I watched a couple of days ago. Mines of Moria, Drums. A wave of Orcs.

Yeah, I’m a Tolkien geek. And the Unions are the perfect servants of Sauron in the Pink House.

As a conservative, I’m not sure what’s supposed to give me pleasure about seeing a young dude getting beaten on by an old semi-literate labor monkey.

You meant to say “As a conservative Internet tough guy willing to take verbal shots at a young guy who waded into a hostile environment and had the guts to challenge the union thugs, I like would have totally kicked their asses if I had been there.”

Why do I think that the criminal prosecution will go nowhere? Because Tony the thug will have several “witnesses” more than willing to state Crowder assaulted Tony out of sight of the camera. And that prosecution of union violence in Michigan seems unlikely.

Would that we had a criminal prosecutor commenting here to tell me I am full of fecal matter….

I’m no criminal prosecutor, but you’re wrong, because the video of the sucker punch shows that Crowder wasn’t even addressing ‘Tony’ at the moment when ‘Tony’ lunged over to plant that punch from ambush. In this case, not even ‘union solidarity’ will help Tony with perjured testimony from the brothers, because that punch was so egregiously thrown from hiding.

Keep in mind that the path of least resistance, and least hassle, for both the police AND the prosecutor is a) “do not find” the assailant, and/or b) exercise prosecutorial discretion and not prosecute or throw the case if forced to take the charges.

What are Patriots going to do to the police and prosecutor if there is no punishment for the Union attack? There is no leverage there.

Conversely, what are Obama, Holder, and the Unions going to do to them if there is punishment?

We do not live under a rule of law. When that happens, there is only one alternative, and people are not ready to do that yet.

Remember that Chinese “Cultural Revolution” where they attacked everyone and everything rooted in Western learning or Western ways? How they removed, beat or just outright murdered a million or more Western-educated lawyers, doctors, teachers, police, military and more?

Would the Left do that here if they could get away with it? Destroy the lives of all conservatives and re-educated their children to more acceptable ways? What if they managed to disarm us and declare conservatism a psychological disorder?

Would we do it to them if we could?

1) In a heartbeat. In a hot Lubyanka second. With great joy in their hearts, and a feeling of righteousness not equalled since Arnaud Amalric during the Albigensian Crusade.

2) In our case, not yet. But when they start it, we will finish it. Beware the anger of a patient man.

This union thug does what all union thugs do, intimidate instigate, and incite riots, violence, and anarchy.. He’s nothing more than a low to mid-level union thug agitator, whose tactics are SOP.

He’s not fooling anyone, and as always, the evidence is against them. It’s whose in power at the decision making levels, Prosecutors, Judges, etc, that allow these thugs union criminals to get away with their crimes, or make them accountable for their actions.

You will never see, with any factual evidence of record, as Conservative ever start in any manner shape or form, then engage in, criminal behavior like this union thug punk agitator..

The Truth is always on Conservatives side, as was with Rep John Smith false allegations of racial spitting and name calling, fir which Andrew Breitbart challenged anyone with evidence to prove such false allegations were true with reward money, for which no such evidence existed.