Sorry, no appointments until June

Sorry, no appointments until June

Well, at least it’s not 10 years from this afternoon. 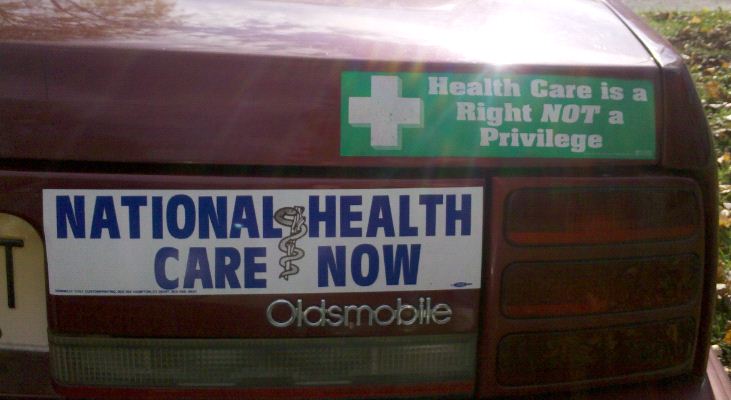 Oldsmobile has already run into the death panel.

Couldn’t the “general welfare” reference in Article 1, Section 8 of the Constitution be interpreted by liberals similar as to the Second Amendment reference to “keep and bear Arms, shall not be infringed” as is interpreted by conservatives?

Just thinking out loud here and maybe the prof would like to elaborate?

Of COURSE! You can shoehorn anything into that expansive use of “general welfare”.

Naturally, that is not what the phrase meant to the Framers.

ONE of the several failures of the Articles had been in providing any effective means of doing things we would call “national infrastructure”. (For an interesting little trip in history, look at how late in U.S. history TIME became standardized.)

Things as simple and essential as standardized weights and measures. THOSE were the “general welfare” kinds of things the Framers meant. “Welfare” from the government would have been anathema to them, and they would have dealt with needs via charity.

How about interpreting the “General Welfare” as a reason to impeach barry for his willful destruction?

He hasn’t found a way to kill my day dreams, yet.

Not sure what you mean by “as is interpreted by conservatives…”

But I do know that “Promote the General Welfare” does not mean ‘provide welfare.’

Health care is neither a right nor a privilege.

The only application for “privilege” the comes to mind is a license to drive. You are privileged to operate a motor vehicle by some governmental agency. You don’t require a privilege from an authority to obtain health care. Yet…

If health care is made a “right” by government, your access to that right and control of your behavior respecting your own health becomes the concern of the government.

Oh, well… It was such a pretty republic…

I have been mulling the entitlement mentality over because you are right, it is neither a right or a privilege.

I think we need to call this Generation Revenge.

Using his logic, the Fed Gov should provide guns and ammo to every citizen. I don’t think that would go over so well with this particular Oldsmobile owner.

With Obamacare the cure (everyone must be covered) is worse than the problem it intends to remedy (lower overall costs). And, its negative affects are immediate. Bureaucracy will expand exponentially and will add trillions of dollars of cost to the federal deficit with government employee salaries, benefits, pensions, etc. added on– all these effects basically a redistribution of people and money into government’s waiting room.

Imagine the EPA with a stethoscope!

The favorite tool of the EPA is a proctoscope, not a stethoscope.

My eye doctor is no longer going to perform cataract surgeries because the Medicare payments will drop to only $600- that’s for one pre-op visit, the surgery itself, and one post-op visit. It’s no longer worth it to him to do the surgery.

We are going to be like Britain- a two tier system- where those who can afford private doctors will be part of a system like MD-VIP and the hoi-poloi will just have to suffer long waits and government approval for any healthcare services. Also, forget innovations in medical care- you’ll have to go to China for those.

I am sick and tired of idiots being allowed to vote.

Ragspierre (above) touched on my thoughts: Health Care is neither right nor privilege. It is a commodity offered by other people, in exchange for compensation.

The true crime, in my mind, is demanding others offer up their time, training, and resources on demand, with little or no compensation in return because a determined group perverts language and screams loud.

Obamacare does not address the causes of massive inflation in the medical and pharmaceutical sectors. There is no preparation to compensate for the limited number of professionals, facilities, equipment, and supplies. Obamacare is marginal care at best. It does not distinguish between contributory and non-contributory or net-negative participation. It is a practical plan to accelerate corruption of individuals, economy, society, and nation.

Congrats you idiot leftists. You now ostensibly have ‘health’ insurance. Health coverage…? Well, that remains to be seen.

this isn’t ‘Generation Revenge’ – this is ‘Generation Narcissist’ – like that old perfume commercial where the woman says “I buy X because I’m worth it”.

You can’t use rational discussion with 2-year-olds; they have no concept of anything past this moment, no consideration for anyone but themselves. And they get absolutely angry at anyone who says “no”. Now they’ve grown older (but not up) – and you have a bunch of 2-year-olds voting – what did you expect?

And that’s why Obama won – he didn’t argue with their demands, he promised to fulfill them. Just like a really bad parent who spoils the cranky 2-year-old, instead of telling them they can’t have more ice-cream and putting them down for a nap.