Steven Tyler of Aerosmith and, of late, American Idol fame, found himself on the receiving end of the race card recently:

Nicki Minaj is firing back at Steven Tyler over his comments about her and Mariah Carey as the new judges on “American Idol.” Tyler, who judged the show for two seasons, said the in-fighting on the new “American Idol” panel isn’t what the show needs.

Tyler went on to express doubts regarding Minaj’s ability to judge talent and said, “If it was Bob Dylan, Nicki Minaj would have had him sent to the cornfield! Whereas, if it was Bob Dylan with us, we would have brought the best of him out, as we did with Phillip Phillips.”

Minaj took to Twitter to continue the mudslinging and called Tyler’s comments “racist” and told him to “go f—[him]self.” 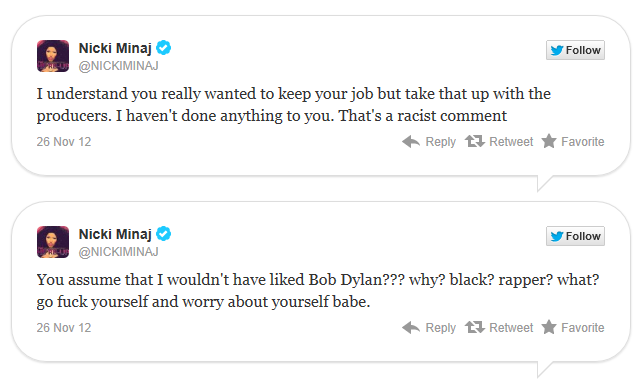 To which Tyler responded:

Somewhere Bob Dylan must be wondering:  Who is Nicki Minaj?

Sorry, Tyler. You are guilty until proven innocent. That is the lesson learned from the post-reactive human and civil rights movements.

What would life be without nonsense to fill and complicate our lives.

Gotta hand it to ya, Professor … you know your Dylan. 🙂

The solution is simple don’t hire people of color because they do not fit your “corporate culture” of competence or personal responsibility. If you’re going to claim that the color of your skin excuses you from being judged on your competence then learn to accept the consequences.

Folks like this Nicki person are exactly why I do not, nor have ever, wasted time viewing trash television such as “American Idol.”

The myriad of mindless fools who plan their lives around the airing of such drivel will, unfortunately, will one day make up the majority of the electorate. How utterly sad for America.

Good. Old white liberals need to know what it’s like to have crap like that thrown at you for no justifiable reason.

I love the fact that he used the phrase “sent to the cornfield” too. If I recall, that’s from a 50 (or so) year-old Twilight Zone episode.

Blood on the Tracks is my favorite album of all time. Just the other day I was reading a progressive’s twitter feed and thought to myself, “it’s a wonder that guy can even feed himself, he’s such an idiot.”

I hope Steve Tyler has taken a long deep look into this allegation, and had a talk with his Republican bandmate Joe Perry. This kind of incident could be the start of a turning point.

Isn’t Nicki the one that “supported Romney” BUT had a change of heart?
Nicki Minaj supports Obama says Romney endorsement was sarcasm

This one’s for you Nicki:

When you can match (good luck) Aerosmith success, then come talk to us.

Beside Tyler is a paisan..

I don’t think it was a legit endorsement to begin with. I looked at the lyrics and video when that erupted on twitter and thought it was probably sarcasm. Still, I asked my son about it since I really had no clue who Nicki Minaj was before that. His exact words to me, “we don’t want Nicki Minaj on our side.” Evidently even among young conservative rap connoisseurs, such as my son, Nicki Minaj is considered a no-talent train wreck.

Maybe if Nicki didn’t autotune all her songs, perhaps Steve Tyler would have more respect for her artist work. As it stands, the use of autotune in the music industry is a crutch for most people without talent. Would that make Autotune racist?

I guess Nicki is too young to remember this:

Nicki must still be fuming at being beaten by the infinitely more talented Adele at the Grammys.

And we should care about this kerfuffle because …?

Bob Dylan isn’t the only one wondering, “Who is Nicki Manaj.”

Stopped watching these shows around 2006-2007 when it became obvious the focus was on the judges and not the talent. Stopped watching ALL “reality” shows, too. They may cost less to produce, but they are erosive to mind, body, soul, and society in my opinion. “Survivor” in particular–or any of the genre that pits one human against another in a back-stabbing sort of way–is in need of eradication.

As for Nicki….Who the hell is she again?

That Nicki Minaj is a class act. She, like many others in the current crop of “entertainers” is of minimal talent, no culture or class, no morals and is nothing more than an attention whore.

After being begged to watch SNL last night because that “amazingly funny” Jamie Foxx was hosting and listening to his opening racist monologue, I left the room. The first “skit” was even more racist and demeaning to people of pallor and that was enough. No more SNL.

No more (not that there ever was any) Jamie Foxx. Rude, crude and socially unacceptable, even without his comment that 0 is our lord and master. Disgusting NBC. Just disgusting.

Actually, Steve Tyler is right, and that is why I never watctched American Idol. From their inception, they picked judges that would support/favorably critique R&B, Country, Contemporary Vocalists, or Jazz. Rock n Roll? Not so much. Especially anything remotely resembling hard rock, arena rock, or classic rock. I love all types of music, but I found it amazing that Idol would not embrace the harder rock vocalists. I heard they came close once, but their bias in music was so obvious that I could never get into the show. I also think it’s telling that with the exception of Kelly Clarkson, American Idol winners haven’t been a huge commercial success. This is a good example though of how easy it is to take even a non-important issue and make it about race. Classic deflection from the essence of the critique.

I don’t watch these shows but then I don’t watch tv much at all. Every once in a while as I pass through the room something will catch my eye. One of those times was when Susan Boyle was on whatever show that was. Beautiful voice but not pretty. I was totally embarrassed by one of the male judges. He thought he was being so complimentary to her but wound up making an *ss out of himself by being amazed that someone not very pretty could have such a wonderful voice. I was also turned off by the rest of the judges for their attitudes too. The infighting and one-upmanship of these groups are hard to swallow.

Just to be a pedantic Dylanophile, that take of Idiot Wind isn’t on Blood on the Tracks. After the album was about ready to release, based on sessions in NYC, Dylan changed his mind and rerecorded a number of songs, including Idiot Wind, in Minneapolis, that ended up on the official release. The alternate takes have been released over the years on Dylan’s Bootleg series. Fascinating how different the lyrics are. It’s a great, great song, regardless of the version.