They hate us, so who cares?

From the K-man in San Francisco: 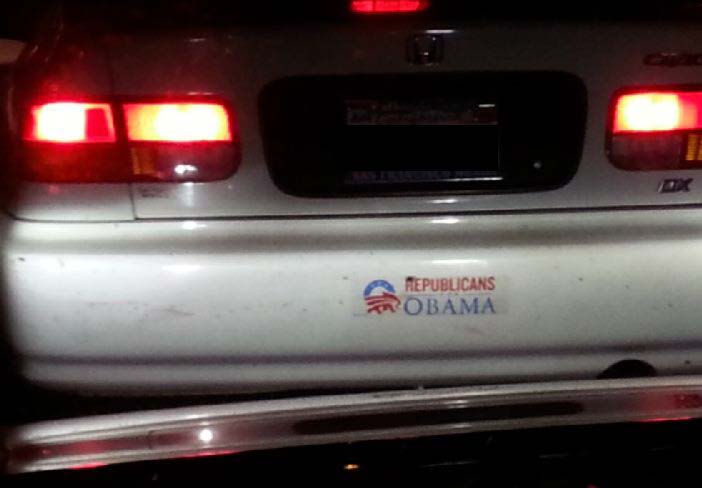 Hate ’em back. It works for me.

That car belongs to Charlie Crist or Chris Christie.

They’re feeling their oats. The next two years are strictly about destroying the Republican House and setting up totalitarian control in 2014, with the coup de grace for the country in the last two years of Obama. Until then, it’s All-Alinsky, all the time.

I’ve said this before but I believe it’s worth saying again:

Boehner is either a clueless idiot or the most cynical, conniving bastard in DC.

Either way; HE HAS TO GO.

Obama Republican aka mugwhump. Ram On.

As always, if you see a car like this, feel free to open it up and take anything you find inside. Your tax dollars probably paid for it, so it’s just a way to get a little bigger tax refund. Be smart and don’t get caught though.

You may also find the driver’s address from his registration or proof of insurance in the glove compartment. Your tax refund can be increased even further using items you find at that address.

There will also be weed or coke in the ashtray (Don’t the fools ever watch COPS?). And with any luck, they left their EBT card in the change holder the last time they went to Whole Foods.

The bumper is falling off.

If you’re for Obama, why not just do a Crist, and be done with it?

Another one of the frauds. If you voted for lord and savior his royal barryness you’re no Republican, nor are you libertarian.

I’m surprised there is a car owner in SF who openly identifies as a Republican.

Only in San Fran: Proud to be openly gay but deep in the closet as a Republican.

Democrats who voted for Reagan- Reagan Democrats, voted for Ronald Reagan in 1980 because they wanted Economic Prosperity, Jobs, a Strong America with a strong Military, aka a brighter future, ie; they were Intelligent and Patriotic.

Republicans who voted for Obama, both in 2008 and especially 2012, want a liberal progressive a thuggish tyrannical regime, with a recessionary depressive Economy with no Jobs- a weak anemic private sector economy which Obama massively over taxes and over regulates businesses and individual people to death, along with wanting a weak and impotent hollowed out Military, which they suck the money/lifeblood out of it to fund Obamacare, and the Obama whole welfare state- ie; are ignorant, imbecilic, asinine, and intellectually bereft- void of any intelligent life form, aka stupid beyond all comprehension and belief, ie; UnAmerican liberal progressive RINOs.

First and foremost, a “california republican” is usually fairly liberal. Sorry to all true conservatives in cali, but you are in the vast minority.

Also, this smacks of the same shenanigans on the web where we see comments that start, “I am a life long Republican, but….” and then they go on a liberal tirade. Liberals love to think they demoralize others with these antics and it also makes them feel better to think that everyone thinks like they do (99% anyone?).