Well, at least partially, regarding Erik Loomis, the University of Rhode Island assistant history professor who tweeted a crazy tirade of invective against the NRA culminating in his wish for Wayne LaPierre’s head on a stick.  When people objected, Loomis clarified that life in prison would suffice.

A variety of academics and left-wing bloggers at Crooked Timber erroneously jumped to Loomis’ defense by treating his “head on a stick” tweet in isolation, not as part of the larger unhinged and bizarre stream of tweets. Completely ignored was that Loomis sought to deprive LaPierre and the NRA of the very speech rights the people defending Loomis championed.

Glenn Greenwald, certainly no right winger, took the position that Loomis was a hack blogger at a hack blog, but not a hack who should be fired for his tweets:

@ohtarzie Oh, obviously – LGM is a cesspool of unprincipled partisan hackdom – look what they said about Palin’s crosshair “metaphor” 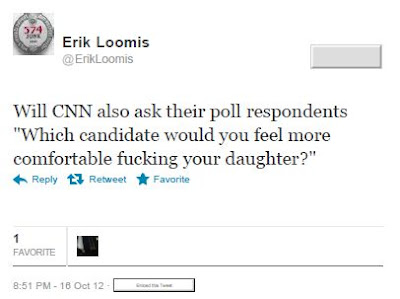 See, the thinking left and thinking right can get along.

Only an unthinking “brain-dead hack” would still think Loomis was a hero.

How to respond to a fascist madman:

Plan A:
In no uncertain terms, call him a fascist madman, and stand in the way of anything he is trying to accomplish, including holding responsible people or institutions who support to facilitate him.(The Reagan method)

Plan B:
Indulge him, as if he was sane, and go in as if there was no anti-Semitic fascist movement in the United States, and reap the results. (The Boehner method)

Plan C:
Take a lot of money out of the country, and emigrate. (The Hollywood method)

Not firing is one thing. Granting tenure is another.

Regardless of his teaching and research credentials, should someone who behaves like Loomis be promoted to a position from which, barring unprecedented circumstances, he cannot be dismissed for life? While I haven’t followed this kerfluffle in any depth, I am inclined to say No.

The people doing the hiring are like-minded. That is how far we’ve allowed things to progress.

Again: WE have allowed it.

Stacey has been on a roll on this. Very entertaining.

I think I also first read about the 6’8. Basketball man/woman [ now on CI ] there also . Stacey was very funny there also

“Only an unthinking ‘brain-dead hack’ would still think Loomis was a hero.”

I clicked on this link, only to find a childish, snarky dig at Professor Jacobson from Professor Brian Leiter.

To which I say,

Brain-dead Hack was a friend of mine …

You are no Brain-dead Hack.

LukeHandCool (who would only add that he’s met a million snarky professors like Mr. Leiter … a dime a dozen and 10 cents overpriced)

I just Googled “A dime a dozen and 10 cents overpriced” and found no results.

So, I’d like to coin that term right here and now.

As well as issue a challenge to match wits with Prof. Leiter.

No legalese, just two Americans matching wits. I’m an average dummy … what have you got to lose, sir?

The underlying principle of “diversity and inclusion” requires that we embrace the horror of fools and idiots, unless they don’t agree with Progressive ideas.

I guess we could put Loomis’s head on a stick but his head is so far up his a** I doubt we could ever get it out. Just a random thought.

I’m curious as to why “some of these brain-dead hacks have reason to worry, and not because of inflammatory tweets.”

Is this supposed to mean – it’s wrong for right to threaten academic consequences to looney Loomis but ok for the left to do it to the Prof?

Loomis should be fired! Everything should be done by the right-thinking to minimize his ability to poison his students and to spread his profanity-laced invective. He is a despicable douche without any character. Take him down and while you’re at it, attack the next one. No shortage of targets.

What does it take for Conservatives to put on the gloves? You all want to be little Boehners? Save yourselves the trouble, you will be annihilated.